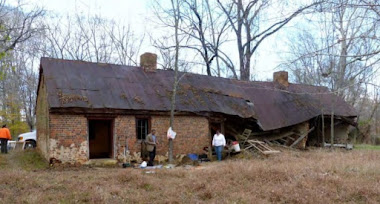 I just stumbled across a very interesting document, a little report of some excavations at a slave quarter in southwestern Virginia. The slave quarter, shown above, was part of Oak Hill Plantation, built in 1823-1825 by Samuel Hairston. Hairston was reputed to be the richest man in Virginia, owning a string of plantations in Virginia, North Carolina, and Mississippi, along with about 1,700 slaves. This building had four rooms and probably housed four families. 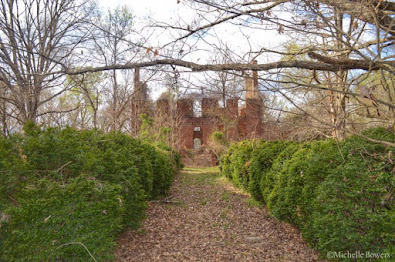 Ruins of the Oak Hill Plantation House, burned by arsonists a few years ago
The descendants of Hairston slaves still keep in touch, and back in the 1990s a researcher was able to interview several old folks who preserved family stories about slave life:

Daniel Hairston was an elderly descendant of Oak Hill slaves visited by the author. Hairston was born in 1920 with three of his grandparents having been slaves. Both his grandfathers, Gus Hairston and Jube Adams, had been slaves at Oak Hill. Gus used to cut ice on the river for the icehouse at Oak Hill. Daniel recounts a story of Gus working in the garden and getting himself some butter that he shouldn’t have. He was “whupped” for an unrelated offense causing the butter to fall out from under his hat where he’d hidden it. This discovery caused him to be beaten again. Daniel relates that his grandfather told it as a joke but it was a reminder that they had to take whatever was dished out just to survive.
Daniel recalled another story of how Oak Hill’s enslaved people would sometimes gather at night to kill a hog and take it off into the woods to cook. They would use fence rails for firewood and burn up all of the inedible remains to hide them before dawn. Similarly, if the enslaved population wished to worship together they would gather in the woods at night, placing a large cauldron upside down to supposedly muffle the sound.

A great aunt of Daniel’s who was enslaved at Oak Hill was once slapped in the face by “Ol’ Miss,” or the wife of the plantation owner. His great aunt was so enraged that she stuck her long fingernails into the mistress’s satin dress, tearing it. The aunt was so terrified at what she’d done that she left the plantation and went into hiding for two years. The oral history indicates that when she returned she was left unpunished for her absence. This tale was passed down through the family to show that the great aunt’s faith in God gave her the strength to return home and helped her evade punishment.

The last story is a very interesting example of a common practice in slave societies. Enslaved people sometimes just left after fights or other incidents and stayed away until they were given assurances that they would be welcomed back. Only a few "runaways" tried to make it to freedom; many more hung around the neighborhood until they were caught or made arrangements for their return, and some were just trying to visit spouses, children, or other relations from whom they had been separated. 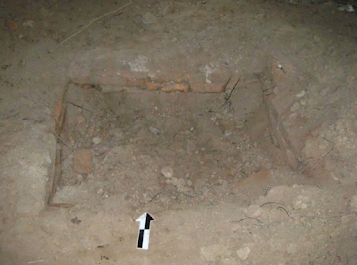 The building had four rooms, each with a fireplace. The archaeologists had time to dig two excavation units. The position of the first one was obvious, on top of this feature, a brick-lined pit measuring 5x5 feet (1.5x1.5m). 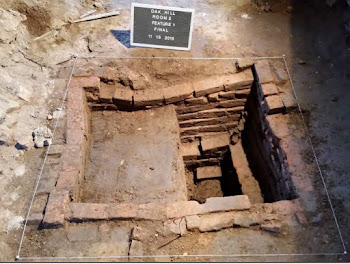 Which after excavation looked like this. It has been bisected, as we say, and half excavated. This was a storage pit or root cellar. North American slaves loved these and dug them in most of their homes in the 1720-1860 period. In-floor storage pits are common around the world, including among English settlers in North America, and among many Native Americans. The habit of putting a pit in front of the fireplace seems to come from England. But few people have been as invested in the practice as enslaved North Americans. Some slave quarters I have seen had three or four pits. (They had boards over them most of the time.) Some archaeologists have speculated that this was done to hide extra food or stolen items, but honestly, these were not very secret, and the root cellar is the first place an overseer looking for a stolen item would search. So it may be better to think of these as private rather than secret places. Things one didn't necessarily want hanging in the open could be placed in the pit, giving the people who lived in these small homes, always under the owner's eye, some small measure of control over their lives. 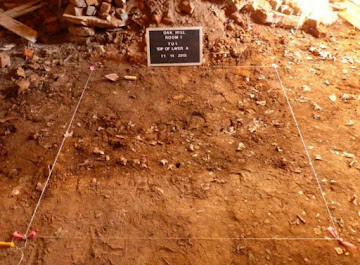 The visible brick feature in the first room was a stroke of luck; most features are nothing like that obvious. In the other room they investigated, the archaeologists troweled the dust layer off the floor. They were then able to see this stain; this is what most pit features look like when they are first exposed. They are usually darker than the surrounding subsoil, and they hold water better, because of the extra organic matter. 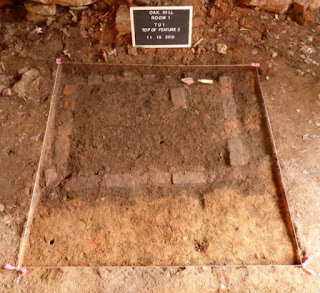 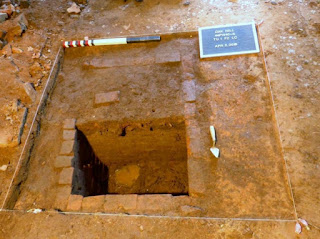 That pit looked like this after excavation. Most likely there is a similar pit in each room, so that each family had one. 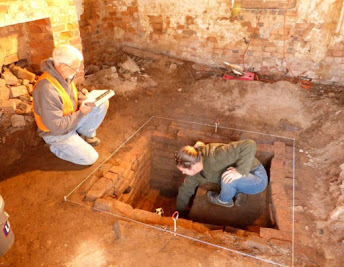 Now we get to the hard part of archaeology: how, why, and when were these holes filled in? Usually we have no idea. The soil in these holes did not wash in, because that would have damaged the unmortared brick lining. Someone must have filled them, after they were no longer in use. From the artifacts found in them we can guess that was years before the building was abandoned, probably before 1850.

Archaeologists expect, or hope, that the artifacts in the pit were used by the people who lived in the house. Usually, we are right, but not always. Sometimes people fill in holes with dirt from somewhere else. An old archaeologist I knew in Delaware many years ago swore to me that he once saw a guy back a pickup truck up to an old cellar hole and shovel in a truckload of trash, then drive away. So if you ever want to flummox a young archaeologist nervously reading a paper, ask him or her where the dirt in the hole came from. (There is even a name for the study of where the dirt came from, Taphonomy. So if you really wanted to be an obnoxious questioner you could ask, "I wonder if you could elucidate the taphonomic processes at work here for me.") 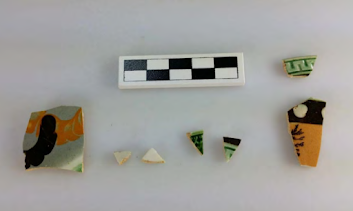 But placing our hope in the odds, and assuming this stuff came from the slave quarter, what was found in these pits? All sorts of things! Like, a dozen glass beads in different colors, a frying pan handle, a bone-handled fork, tobacco pipe fragments, nails, bottle and window glass, mother of pearl and glass buttons. And this mocha-decorated Pearlware, made between 1790 and 1840. The mocha glaze was made with urine, one of the many, many industrial uses for piss that Europeans came up with. 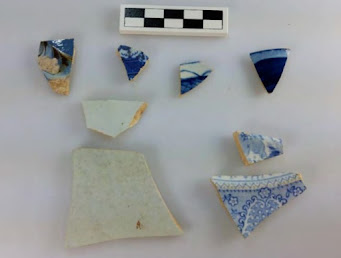 And regular blue and white Pearlware. We assume that the nice dishes we often find in slave quarters were castoffs from the big house, and that they were old and chipped before they were used here. But that is a guess. Many slaves, especially house servants, had some very nice material goods, like posh clothes and decent dishes. Some of them regularly rode horses or drove fancy carriages. It is a mistake to assume that status and material wealth are perfectly correlated. If you visit some plantations now (even Mount Vernon, where they know better) they try to make the slaves' lives look materially miserable in a way that is false to the world of 1790. We have plenty of pictures of George Washington's house servants, and they were dressed in outfits 90% of free people couldn't afford. Field hands had pretty terrible clothes, but remember that in their world, to be really poor was to starve, and slaves didn't starve. After emancipation, many and perhaps most African Americans were materially worse off. But they were not the least interested in trading their freedom for better clothes and the chance to ride a horse. 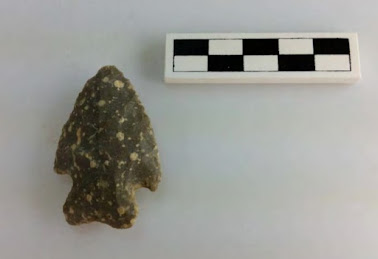 Also from one of the pits, this spearpoint, which is around 10,000 years old. One of the complications of archaeology is that we are not the first people to be interested in the past. African Americans loved old stone tools, especially the ones made out of cool-looking stone like red jasper or clear quartz. Some people used these as crystals in magical practice, but it may be that some just liked them or carried them for a bit of luck. I personally excavated three amazing spearpoints from a nineteenth-century house that I feel certain belonged to one of the slaves.
To me the most fascinating thing from the pits was the animal bones, more than 6,000 in all. They came from a stunning array of species: pigs, cows, and chickens, yes, but only a few hundred domestic specimens, vastly outnumbered by the bones of wild animals. The wild animals include great blue heron, turkey, goose, duck, various songbirds, squirrel, raccoon, opossum, rabbit, chipmunk, frog, gar, perch, and other fish. Also hundreds of fragments of wild bird eggs. Archaeologists very often find the bones of wild animals in slave quarter deposits, and it is clear from this evidence that enslaved people did a lot of hunting and fishing. You could say they had to do this because the planters didn't provide them enough to eat, but on the other hand people like to hunt and fish. Hunting and fishing were and still are vital activities for many rural people because they are a pleasant way to spend time that also produces a tangible reward, food fresher and sometimes better than most people can afford to buy. Hunting and fishing also became sources of conflict on some plantations, because the slaves preferred to go fishing for themselves rather than raise the owner's crops. Robert E. Lee argued all the time with old slaves on the plantation he inherited through his Custis wife, who wanted to fish all the time and swore that was how things were run in George Washington's time.
A project like this shows how much can be learned in only a few days of fieldwork, if you know where to look and have a bit of luck, and how much archaeology can sometimes reveal about people who lived only 150 years ago.
Final Report on Excavation at the Oak HillPlantation Slave Quarter(44PY0440-0005),Pittsylvania County, Virginia. Funded by grants from the Virginia Department of Historic Resources’ Threatened Sites Program. Randy Lichtenberger, Director of Cultural Resources and Elizabeth A. Moore, Curator of Archaeology, VMNH. August, 2017.
Posted by John at 8:40 PM