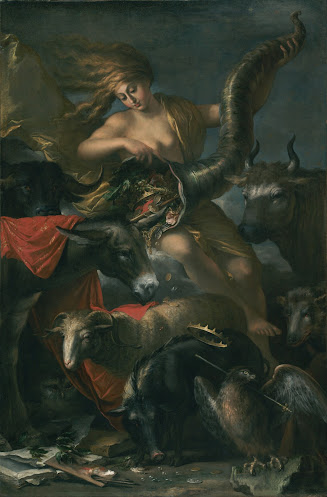 A personification of Fortune bestows symbols of wealth, status, and power on dumb animals who neither need nor deserve them. Fortune is usually represented with a blindfold, but Salvator Rosa showed her fully aware of her favors. Similarly, the cornucopia is usually shown facing upward; by depicting it overturned, Rosa expressed reckless extravagance. 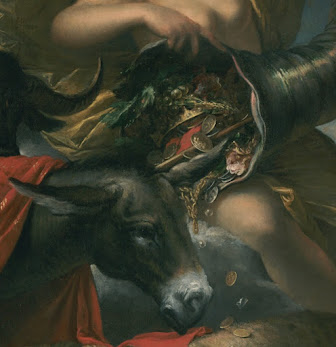 The beasts, portrayed with stark realism, trample the attributes of art and learning, including books and a palette. Draped in the cardinal red of the Catholic Church, an ass shields an owl, the symbol for wisdom, from the light. Bitter over his exclusion from papal patronage, Rosa included personal references: a book bearing his monogram and a pig stepping on a rose, which alludes to his name. 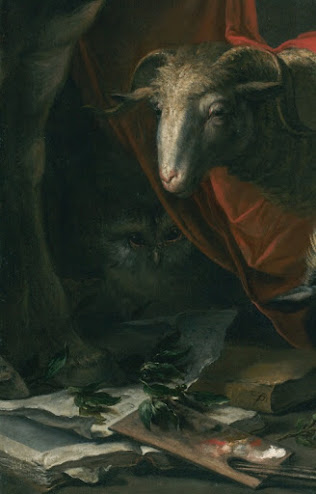 As a satire of Pope Alexander VII's nepotistic artistic patronage, this painting nearly sent Rosa to prison. After showing it privately in his studio, he flagrantly disregarded all advice and exhibited it publicly in the Pantheon in 1659. Allegory of Fortune aroused such a furor that only intervention by the pope's brother saved him.

Gosh, I can't imagine why the Pope didn't want to sponsor him. But if you're a good enough painter, your sour grapes may one day end up hanging in a major museum. And yes, Rosa was an interesting character. 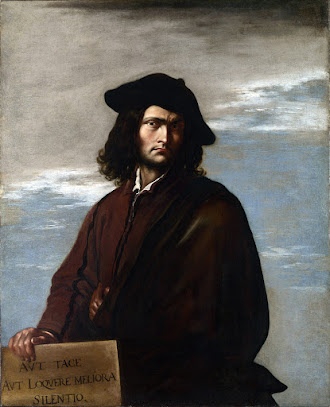 Here is a painting titled "Philosophy" which is actually a self-portrait.

Despite living three hundred years before the Romantic movement, Rosa--a poet, satirist, composer, etcher, and painter--epitomized the Romantic rebel. He refused to paint on commission or to agree on a price beforehand, and he chose his own subjects. He painted in order "to be carried away by the transports of enthusiasm and use my brushes only when I feel myself rapt." Rosa studied in Naples, where Jusepe Ribera's realism influenced him. Encouraged by Giovanni Lanfranco, Rosa went to Rome in 1635. A bout with malaria drove him back to Naples, but he returned in 1639, resolving "to have his name on everybody's lips." His amateur theatrical group lampooned the sculptor Gian Lorenzo Bernini, prompting Rosa's quick departure. In Florence he enjoyed Medici patronage and founded the Accademia dei Percossi (Academy of the Afflicted), a crossroads for literati and artists. Rosa considered his innovative, rugged landscapes as mere recreation; in his mind only religious or historical subjects constituted "High Art." In 1649 he settled in Rome to work toward success as a history painter. 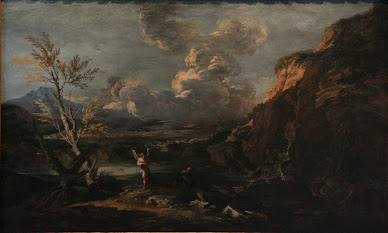 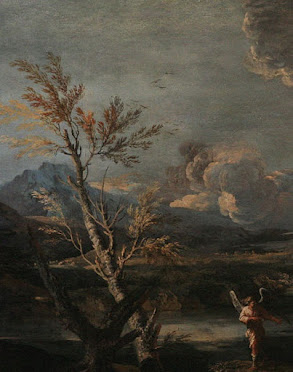 His place in art history is all about these landscapes, which people call "proto-Romantic." But maybe he should instead be known as one of the first famous artists to prize the authenticity of his own vision over the need for patronage and then complain bitterly that he couldn't get patronage. It is, after all, a long and noble artistic tradition.
Posted by John at 7:48 AM

Thanks! Nice change of pace -- aside from Artemisia Gentileschi, 17th century Italian painters get no love.