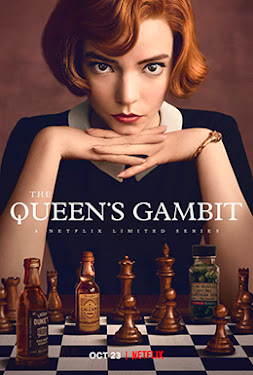 My wife and I very much enjoyed The Queen's Gambit on Netflix, a 7-episode series about a female American chess prodigy of the 1960s. Some things about her character, including her chess style and her prickly personality, are said to have been based on Bobby Fischer, the top American player of that era.

The series is partly about the weird world of competitive chess and the peculiar characters who thrive there, but also about the struggles of a strange, somewhat crazy person to emerge from an awful childhood and find a decent adult life.

If you're curious about the chess, my favorite chess vlogger has an analysis of the final game. The first 2/3 is based a game played in 1993 by Vasyl Ivanchuk, but at a certain point the makers of the series found a better move for their heroine that leads to her winning a game that Ivanchuk drew.