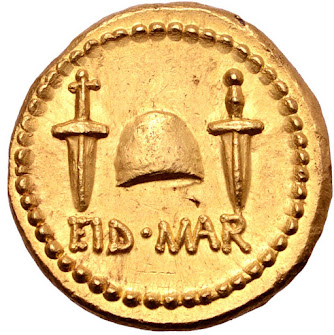 A coin minted by Brutus (Et tu, Brute?) during his Civil War against Octavian in 42 BC, stamped with EID MAR to commemorate the assassination of Julius Caesar on the Ides of March, just sold for $3.5 million, a new record for a Roman coin. The coin was unknown to the world until the sale was announced. Some collectors love coins partly because they are small and secret, and many of the world's most valuable coins are in unpublished collections. 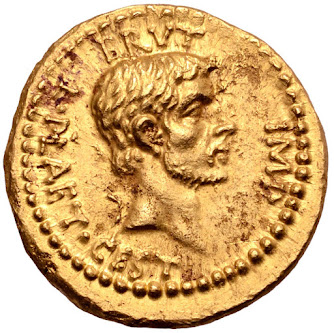 This set me thinking about how much we really know about Roman history. For some episodes we have only a single narrative work, and when there are more they may all be derived from some single lost source. What if that source made it up? But really there are many other sources we can turn to, at least for public, official acts. The Romans were of course always carving inscriptions on things, many of which mention emperors and their acts. They issued millions of coins, some of them to commemorate particular victories or other events. And by and large these sources confirm what we read in Tacitus or Livy. The staggering physical remains of the empire, all those roads, walls, forts, triumphal arches and so on also confirm the basic story. This gives me a lot more confidence that what we read in the histories is true. 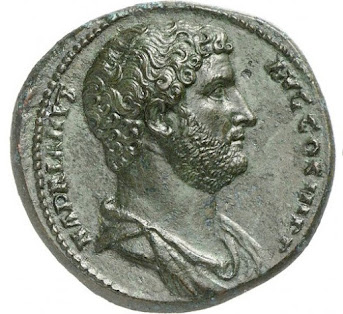 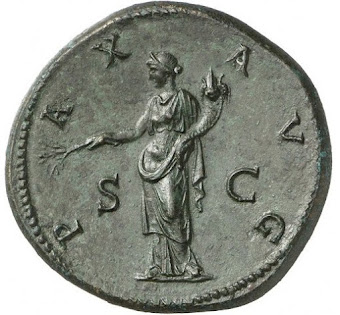 Incidentally the previous record holder for a Roman coin was this sestertius of Hadrian, just a little brass coin, but look and at amazing artistry of his portrait. The reverse shows the goddess of peace. This is a memento of the empire at its height, when the Pax Romana spanned the western world. For me, at least, that is its real value. Those things happened; they are stories beyond our imaginings, but they are real.
Posted by John at 6:44 AM