Today's Place to Daydream about: Carcassonne 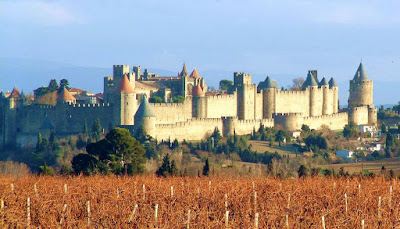 Today my imagination takes me to Carcassonne, most striking and famous of medieval cities. True, it has become one of those places where the 2 million tourists a year vastly outnumber the 50,000 inhabitants, so visit in the winter if you can; some who brave the summer crowds say the experience "has all the charm of a medieval siege." Still, this glorious vision haunts the dreams of medievalists. Some things are so wonderful that even the modern hordes cannot ruin them, and this is one. 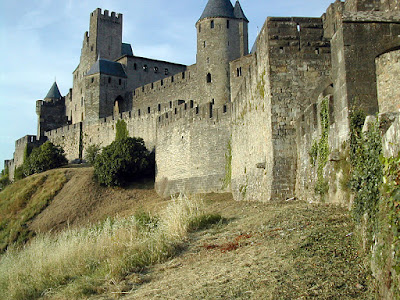 The town is ancient, occupied since the Neolithic and receiving its first stone walls around 500 BC. It was a significant place in Roman times, and one can't dig inside the walls without turning up Roman artifacts or foundations. It the chaos of the late 200s AD, when barbarians rampaged through the empire, a massive new wall was built. That wall approximates the course of the current inner wall, which incorporates a large amount of Roman masonry. 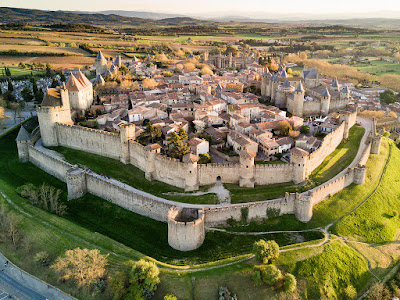 The town has an amazingly rich history. In the fifth century it was taken by the Visigoths and incorporated into their kingdom. In 508 it was besieged by Clovis, the great Frankish king, but he failed to take it. Muslims fresh from overrunning Spain did take it in 728, and then Pepin the Short (Charlemagne's father) took it back for Christendom in 752. 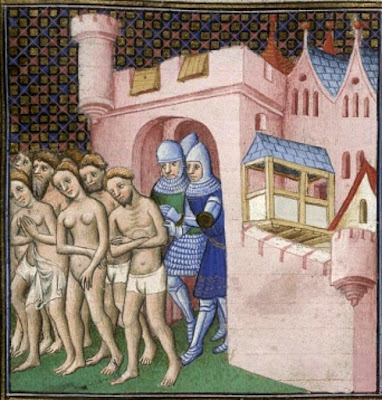 In the 12th century the town was one of the centers of the rising culture of southern France, and the viscounts were great patrons of the troubadours. They also protected the Cathars, the anti-clerical heretics who caused so much trouble and ended up so important in the history of southern France. After the Pope declared an anti-Cathar crusade in 1208, Carcassonne was attacked by a northern French army led by Simon de Montfort. In August, 1209 the town surrendered after a siege of just two weeks. All those suspected of having supported the Cathars had to leave (above, in a 13th-century illustration). 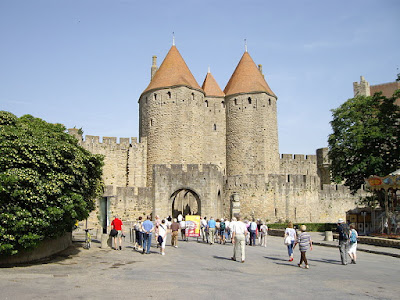 For a few years de Montfort held the town himself, but it was eventually transferred to the crown of France. Under St. Louis the French embarked on a great building campaign in the town, repairing the old walls, replacing several towers, adding the second, exterior wall and constructing new gates (above). But all was not well under royal rule in Carcassonne. In 1234 a semi-permanent office of the Inquisition set up shop to enforce orthodoxy, irritating many residents by grilling them about events they thought were safely in the past and jailing a few. Plus the town's economic position had eroded. 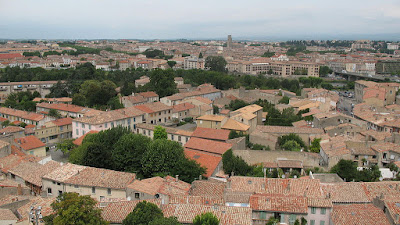 In 1240 a revolt broke out, led by the old viscount's son. But St. Louis' men put in down easily. As punishment they expelled all the town's residents (except churchmen) and seized their property. The former residents were allowed to settle in a new, "lower town" outside the walls. This went on to become the new business center of Carcassone, as it still is. (Above, view of the ville basse from the walled town.) The upper town was resettled by outsiders, many from northern France. 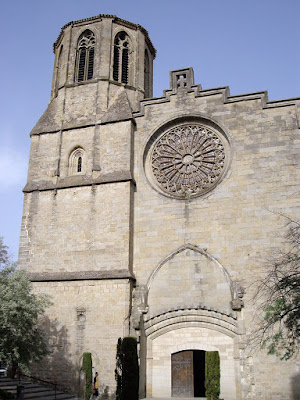 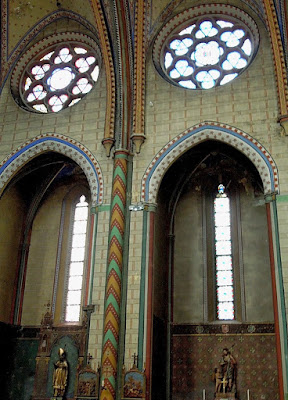 Partly in penance, one suspects, the French kings helped support a great program of church building in Carcassonne, the results of which include the Cathédrale Saint Michael (above) 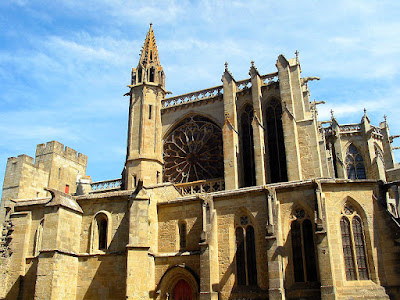 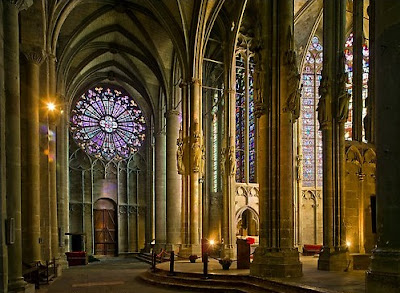 and the Basilica of Saints Nazarius and Celsus.

Famous 14th-century Tree of Life window in the basilica.

In 1315 the town was granted a special tax to raise money for a new bridge across the Aude River, which was completed by 1320. The bridge has been extensively repaired but still connects the two halves of the old city. In 1355 the town was attacked by the Black Prince, who failed to take the citadel by a sudden assault and settled for burning the lower town. (Those of you raised on the English tradition that makes the Black Prince a heroic figure might contemplate how he got his nickname.) 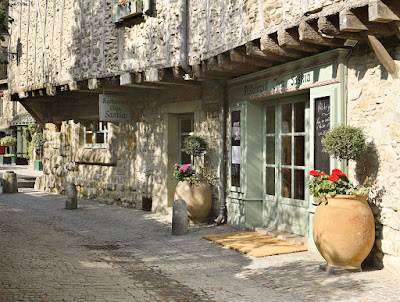 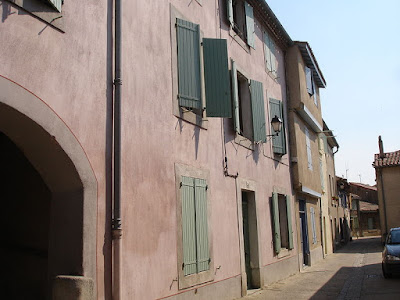 The town had another period of economic success in the 15th to 17th centuries, based largely on trading wine and blue dye made from woad. Many of the houses in both the upper and lower towns date to that period. 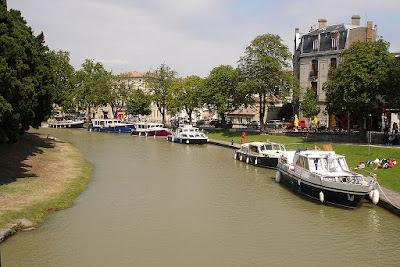 The Canal du Midi was built between 1666 and 1681, allowing boats to journey from the Mediterranean to the Atlantic through France. It passes by Carcassonne, and these days one can book an excursion of a day or longer to explore the south of France by boat. 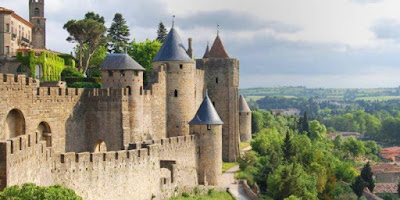 The town's defenses were maintained until the 18th century. At some point they were officially declared surplus, and they began to decay; the space between the two walls filled up with houses. After Napoleon's defeat people began actively quarrying the walls for stone and much damage was done. In 1849 the government decreed that the walls should be demolished. But this caused such an outcry that the decree was rescinded, and instead efforts began to restore the city. At this point the man who was to have a bigger impact on the city than anyone since St. Louis enters the story: architect Eugène Viollet-le-Duc. Viollet-le-Duc was one of those nineteenth-century characters whose specialty was taking actual medieval buildings and "restoring" them to look like medieval buildings were supposed to look. He was responsible for adding the lovely pointed slate roofs to Carcassonne's towers, which never had them before. He also added lots of arrow slits and other "medieval" touches. 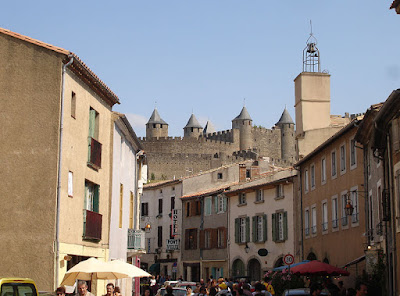 You have to admit, though, that the result is gorgeous. And when the French government got Carcassonne listed as a UNESCO World Heritage Site they specified that part of its historic importance came from the involvement of Viollet-le-Duc in its restoration. Was this, maybe, a preemptive strike against any purists who might want to remove the slate roofs that people like so much? At any rate I find it fascinating that Viollet-le-Duc, who always said that his only goal was the preservation of history, has now become history worth preserving. 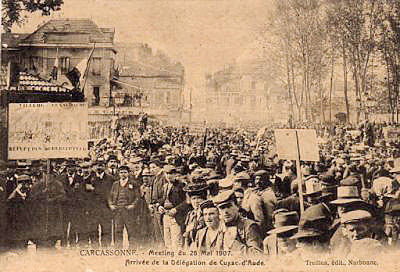 In 1907 Carcassone was witness to another important historical event, the "Revolt of the Wine Growers." This was an early example of the French peasant habit of staging dramatic demonstrations against government agricultural or economic policy, which still continues, and it led to the formation of one of the main agricultural leagues. These agitations did induce the government to create policies to help small farmers, which led eventually to the vast system of French and EU subsidies and regulations we have today. 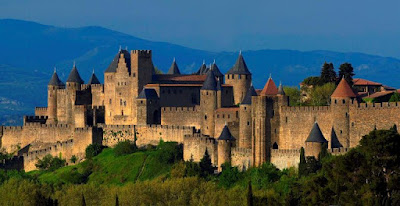 So today I turn my thoughts to Carcassonne, the astonishing survival which so wonderfully evokes the Middle Ages of our imaginations.
Posted by John at 2:48 PM

Great post. My impression is that, sadly, the Black Prince got his nickname from the color of his hair. This is the case, so far as I can tell, with almost all medieval color nicknames. A few may relate to skin tone.