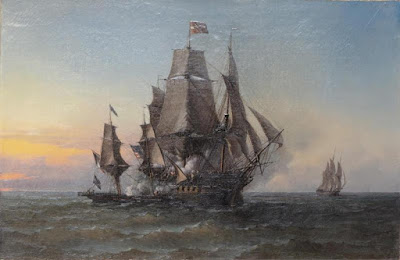 Robert Surcouf was a successful French privateer of the Napoleonic period, who was offered naval commissions but refused them because he preferred privateering. His most famous exploit was taking the British East Indiaman Triton, a ship much larger than his own; realizing that he was outgunned, Surcouf boarded the Triton and his men took it by force, killing ten of its crew. This ended up in a painting by Léon Trémisot (above). Surcouf was eventually awarded the Legion of Honour by Napoleon.

But these days Surcouf is most famous for a single line, which is about as well attested as such things ever are:


When a British captive officer challenged Surcouf with the words "You French fight for money while we fight for honour", Surcouf replied "Each of us fights for what he lacks most."

I'm very tempted to believe that's 100% genuine, if only because it's so wonderfully, wittily French.

Also it seems clear from the record that Surcouf was a very impressive character who dazzled many of those he met, so he seems like the kind of man who could do this.