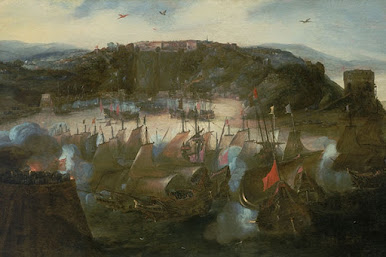 In the 1600s, the Dutch and the Portuguese fought a war. Nothing unusual in that, European nations fought each other all the time. But this war was nonetheless something quite new in human history. 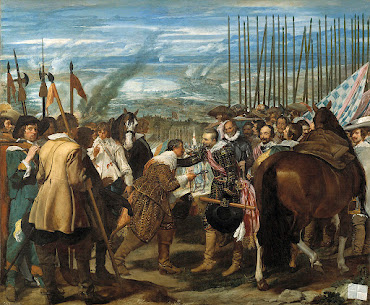 Velasquez, The Surrender of Breda, 1634, an incident in the Dutch-Spanish War

The background is that the Dutch were fighting for their independence from Spain, which they did not formally secure until 1648. Portugal was at that time part of Spain, because of a dynastic alliance. So Dutch ships regularly attacked Portuguese ships, considering their cargoes spoils of war. Even after a truce was agreed in 1588 Dutch pirates continued to prey on Portuguese shipping. Some Dutch leaders thought this was a bad idea and tried to stop the pirates. Then in 1595 some English privateers captured a Portuguese ship returning from the Indies with so much spice, silk and other valuables that the amount of cash in the English treasury was doubled. 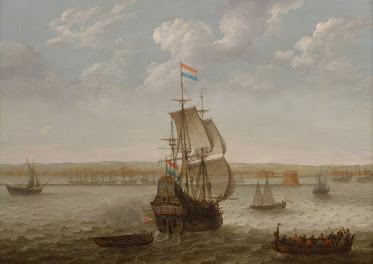 Both the English and the Dutch redoubled their efforts to explore the Indian Ocean and reach the riches of India, Indonesia, China, and Japan. The Dutch East India Company was founded in 1602 and sent its first expedition to India that same year. The Portuguese, used to monopolizing that trade, threatened to attack any Dutch ships they found in that region; the start of the war is usually dated to that Portuguese declaration. But it was the Dutch who attacked first, seizing a Portuguese galleon in February, 1603; the value of its cargo, including 1200 bales of Chinese silk, doubled the capital of the East India Company overnight. The war was on. 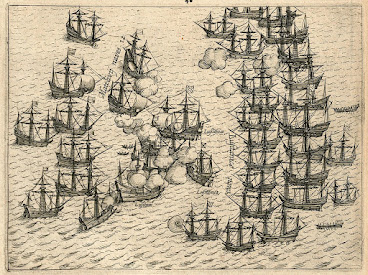 And what a war it was. Besides lasting 59 years, it included naval battles in the Sea of Japan, off Macau in China, off Goa and Kochi in India, off Malacca in Malaysia, off the Azores, and at Sao Tome in the Bight of Benin. 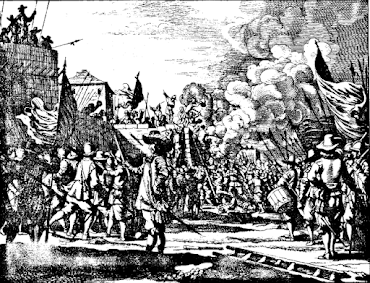 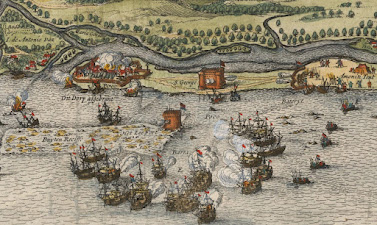 The Dutch seized what is now northeastern Brazil in 1621, lost it in 1625, then took it again and held it for two decades; this is a Dutch depiction of the siege and conquest of Recife. 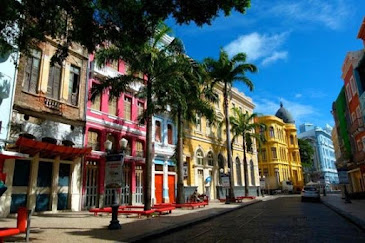 And that is why Recife still has a bunch of lovely Dutch colonial buildings, some of which now house a tech incubator called Porto Digital. Which is actually how I got started on this post, reading about Porto Digital on a global tech web site and wondering why Recife was full of Dutch buildings. 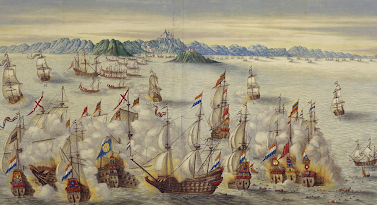 Battle for Goa in India
Morally, this was one of history's more sordid wars, nothing but a naked power struggle over imperial possessions and the profits of trade. The Portuguese Empire was horribly brutal wherever they could get away with it – especially in Angola, where they were the only European nation to do much African slave raiding, and in Brazil, where their treatment of slaves was little short of genocide. But the Dutch were not much better, especially in Brazil, where their only aim was to get some of those vast sugar profits for themselves. On the other hand they did tolerate Jews, and one of the first synagogues in the New World was in Dutch Recife. 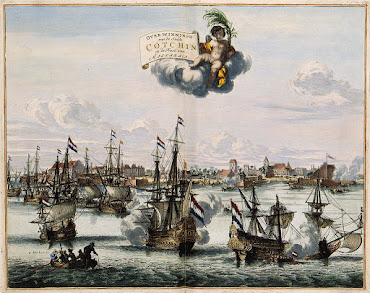 Battle off India's Malabar Coast
But technologically and organizationally, the war was astounding. Nations could now send fleets and armies to the other side of the globe. A new kind of empire was emerging, built not by the vast land armies of the Romans or the Mongols but by fleets of little wooden ships armed with canons. The new empires were supported, not by taxes or tribute, but by the profits from trade between Europe and Asia, and from plantation agriculture in the New World. Ships became the world's most potent weapons, and despite tenuous supply lines and vulnerability to local diseases, European navies could now dominate the seacoasts of every continent. Part of what moved me to write this was my bewilderment at the thought of a sea battle off China between two small European nations; what, do you suppose, did Chinese observers make of that? 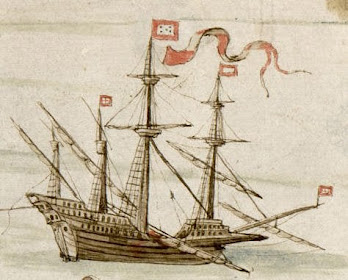 The human cost of European expansion into Asia was high. Thousands of men set sail on these wooden death traps, never to return. But the profits were so great that the ventures went on. Men came from the Netherlands, Portugal, Spain, England, France, Denmark, and more, enduring miserable shipboard conditions for pay and a chance to see the world. Their courage was supported by a vast trove of knowledge slowly built up since the first caravels dared the Atlantic: shipbuilding, sail-rigging, sailing, provisioning, along with ever better charts that showed not just land and sea but winds, currents, and weather patterns like the monsoon. Learning more every year, they gradually extended their reach. They traded fought, and sailed their way to domination of the globe.
Posted by John at 3:31 PM