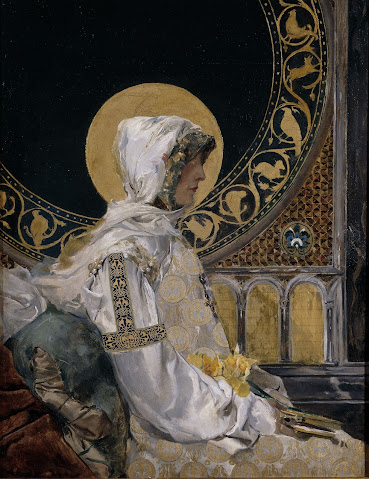 Jaoquin Sorolla, A Saint at Prayer, 1888

An interview with Robert Reich, economist and self-styled "angry progressive."

With its army defeated by rebels, will Ethiopia collapse? If so, how might that happen? This paper argues that Ethiopia was highly decentralized for most of its history and might revert to that state.

Nobody born blind has ever been diagnosed with schizophrenia.

Last Friday spawned another round of nonsense about Why the Number 13 Is Unlucky. Here is CNN. Sigh. You have to wonder about the people who write these articles without even checking wikipedia. Or my blog. Here is the one and only correct answer.

Archaeologists document the tough lives of the people buried at Canada's Fort Louisbourg.

In more Canadian news, syphilis infections are soaring in Edmonton, Alberta apparently in tandem with a surge in methamphetamine use. Oh, the simple, virtuous lives of the Heartland.

Interesting look at the thriving tech scene in Lagos, Nigeria. Another thing that seems to be going great in Nigeria despite rampant crime, staggering corruption, and a low-grade civil war.

From the NY Times obituary of the man who made Sudoku popular, I learn that at least 200 million people worldwide have completed a Sudoku puzzle.

The Deep State Dogs are volunteers who pour through video footage from the January 6 riot to identify participants and document criminal acts.

Classical Monuments covers the famous Temple of Bel at Palmyra.

Why is the Chinese government going after some of the top Chinese tech companies?

Vox overview of the degrowth movement, not positive.

Against fear of an insect apocalypse, snarky but seems fact-based. Many news outlets have reported that after a few rough years in the early 2000s, honeybees are doing just fine, and the same seems to be true of insects in general.

One good thing about having liberal billionaires is that they can pioneer green technologies for fun. Consider hydrogen-powered boats, which some experts say are the only feasible way to decarbonize shipping, now being tested out as luxury yachts.

The attempted hardline coup against Mikhail Gorbachev, which led to the dissolution of the Soviet Union, took place 30 years ago this week. As the music that led into their television announcement of the coup, the plotters chose "Swan Lake," which strikes me as perfect for a foolish fantasy.

Ethereal witchy music: Loreena McKennit, "Samain Night", "The Old Ways"; Clannad, "I Will Find You"; Enya, "Now We Are Free", "May it Be."

Consider hydrogen-powered boats, which some experts say are the only feasible way to decarbonize shipping, now being tested out as luxury yachts.

I suppose it depends on what kind of "feasible" is meant.

We have working, technically feasible solutions that only are unlikely to get implemented for reasons of cultural and societal resistance. For example, given the massive size of modern cargo ships, it's quite technically feasible to fit them out with nuclear power in much the same way we do many warships - but I suppose it's not socially feasible, because the world is full of too many ignorant, alarmist, reactionary fools who would shout the idea down reflexively. It's like how we have plenty of places to build solar and wind power, but self entitled NIMBYists throw a fit whenever people try to actually take actions to help protect all life on the planet, because their own personal sense of aesthetics is insulted.