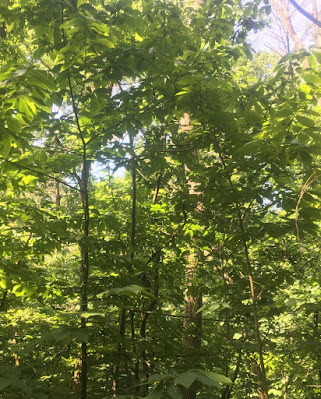 Some parts of the woods near my house are full of young pawpaw trees. Pondering this the other day I got to wondering; are there more pawpaw trees now than there were when I was growing up? Yes, my memory said. The amazing pawpaw patch I stumbled across in 2014 was at that point unique in my experience; to me, growing up, pawpaws had always been something so rare that to find even one fruit was a noteworthy event. The trees in our woods are mostly young, with few mature specimens.
Then I thought, I bet this has something to do with deer.  So I looked it up, and the National Park Service helpfully explains the connection:

So, yes, the spread of pawpaws from moist, sheltered spots along rivers to dry uplands is all about what deer will and won't eat. When I was young there were few deer in the forests I frequented, so there weren't many pawpaws.
Deer are radically reshaping the forests of temperate North America, and if we don't get serious about killing them we will end up with strange, impoverished woodlands. Pawpaw trees are not tall, with a maximum height of 50 feet, but in some areas they may end up taking over from taller trees:

If deer populations remain high, the forest canopy height may decline over time, particularly in areas where pawpaw is the only understory species available to replace dead or dying canopy trees. Or, perhaps the forest canopy would become patchier, with short patches dominated by pawpaw and tall patches dominated by other species that are represented in the sapling layer of the forest (American beech, for example, is deer-browse resistant and the second most common sapling in NCR forests).
Interestingly, a similar phenomenon has been observed in over-browsed forests in central Pennsylvania. In these forests, the small, understory species striped-maple (Acer pensylvanicum) has become increasingly common in the forest understory over a 60-year observation period. At the same time, tree species that are capable of growing into the forest canopy have declined by 85%. Striped maple and American beech were found to make up 82% of all trees in the deer-browsed forests.

Forest that consist entirely of beeches and pawpaws. . . .
Posted by John at 8:43 PM