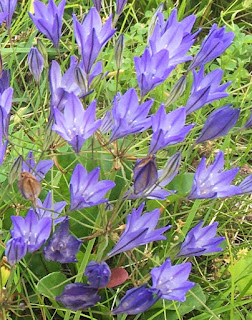 I don't know what these are, but a small patch of them is all that remains from an old
flower garden in my neighborhood, otherwise overrun by grass
Ezra Klein imagines a state and society founded on nonviolence.
You may or may not be able to buy John Bolton's memoir, but the NY Times has a review. Doesn't sound like much of a book.
Long essay on the intertwining of Ireland and Britain; there are 800,000 Irish-born people living in Britain now, about the same number as in 1860, and they seem to include a majority of Irish celebrities.
The NY Times interviewed several veterans of Civil Rights protests in the early 1960s about contemporary events.
Birth of a meme: the Obelisk of Wokeness
The new growth industry in the US rust belt is making plastics from fracked natural gas, which is providing jobs and revenue but combines two words environmentalists hate.
This paper argues that the 1918 flu pandemic caused a severe recession everywhere, and that the cities that adopted tough quarantine measures did if anything economically better than those that remained more open.
MIT ends negotiations with the journal conglomerate Elsevier, saying that the company refused to comply with its "open access principles." I think the end of expensive journals that limit access is in sight, but it is not yet clear what will replace them.
Unilever, an Anglo-Dutch conglomerate, has decided not to move its headquarters to the Netherlands in the wake of Brexit. As we saw with the Amazon HQ2 thing, big companies are most concerned about access to talent, an advantage London will keep for some time.
I was a police officer for nearly ten years and I was a bastard. We all were.
Slate reports from Seattle's "autonomous zone."
Today's unsung hero is Nikolai Ivanovich Vavilov, a Soviet biologist who fell afoul of Lysenko's purge of Darwinian believers and died in prison in 1943. Vavilov is now famous for his theory that rye was domesticated accidentally; it was growing as a weed in wheat fields and the more closely it resembled wheat, they more likely it was to be missed by weeders and thus survive. This general process is called Vavilovian mimicry.
Posted by John at 7:47 AM

That "I was a cop for ten years" essay was very interesting. Toward the end, though, it becomes a fairly standard piece of leftist agitprop, where the solution to virtually anything and everything is the abolition of capitalism. Looking back, I'm left to wonder what proof there is that the author actually was a cop.