Halloween 1596, or, the Trail of Janet Wishart 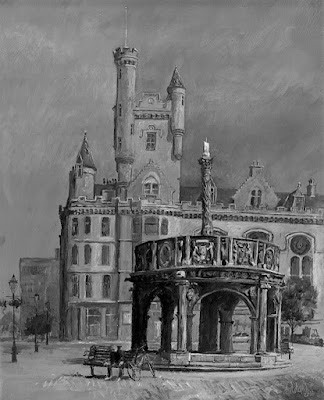 During the Scottish Witch Panic of 1597, more than 400 people were tried as witches, and more than a hundred executed. One of these was Janet Wishart of Aberdeen. I find her case fascinating, besides which it includes this wonderful Halloween story:


Janet's son, Thomas Leyis, was found guilty of being a ringleader and convicted on three accounts of witchcraft. He is said to have presided at a meeting held on Halloween at midnight in the Castlegate when many witches convened between the mercat and fish crosses 'under the conduct and guiding of the devil present with them'. These people all danced and played instruments about the crosses and Thomas was accused of being foremost amongst them and of hitting Kathren Mitchell 'because she spoilt the dance and ran not so fast as the rest'.

This story introduces the theme, which is that the trial of Janet and the other Wisharts connects much  more with the literature and theory of witchcraft than any other British case I know. Tales of witches frolicking on Halloween or other special nights abound in the stories but are rare in the trial transcripts.

Modern scholars have been very interested in why most victims of the witch trials were women, and one of their theories has been that the patriarchy used such accusations to control women and especially their sexually. Certainly some of the old books on witchcraft, especially the infamous Malleus Mallificarum, ooze disgust for women's bodies and women's desires. But again this is very rare in the trial transcripts, where after all the typical witch was an old woman, not a young, sexually active one. But Janet Wishart was a different sort of witch:


One of the earliest accusations referred to an incident in May 1572 when five men, three of them students, caught Janet creeping out of the yard of Adam Mair, her neighbour, at two o’clock in the morning. The men immediately woke Mair’s wife and told her what they had discovered. Furiously, Janet said, ‘Weill haif ye schemit me. I sail gar the best of yow repent’. Whereupon, that same day, between 2 and 3 in the afternoon, two of the youths were drowned in the Auld Wattergang in the Links, where they had gone to wash themselves.

The obvious interpretation of this is that the young men thought Janet was coming back from visiting her married lover, and when they informed the wronged wife Janet responded by cursing them in a way that killed two of them. 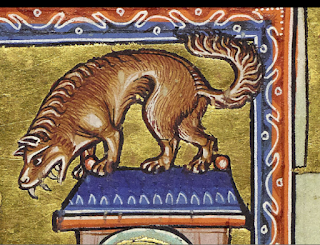 Brown dog from the Aberdeen Bestiary
And then this:


There is an air of novelty about the next case, that of John Allan, cutler, Janet Wishart's son-in-law. Quarrelling with his wife, he 'dang' her, 'whereupon Mistress Allan complained to her mother, who immediately betook herself to her son-in-law's house, 'bostit' him, and promised to gar him repent that ever he saw or kent her. Shortly afterwards, either she or the devil her master, in the likeness of a brown tyke [dog], came nightly for five or six weeks to his window, forced it open, leaped upon the said John, dang and buffeted him, while always sparing his wife, who lay in bed with him, so that the said John became half-wod and furious.' And this persecution continued, until he threatened to inform the ministry and kirk-session.

It's a bad idea to hit your wife when her mother is a powerful witch. In another case Janet was accused of sending a "nightmare cat" rather than a dog, with the same sleep-disturbing effect.

The source I am following rendered most of the trial transcript into something closer to modern English, but for this charge against one of Janet's daughters he also provided the original, which I provide since I know some of my readers are interested in the history of our language:


Fourlle thou art Indyttit for passing to the kirk of dyce and then gathe Ring of a numer of deid folkis banes, and seything thame in watter and tacking of That watter and therefter wasching willea[m] sy[m]mer in the haltoun of fyntrie (he Than being lyand deidlie seik) and therefter causing the said willia[m]is gude Mother tak the saids banes and cast thame in the watter of doyn, q[ui]lk Quhen sche had done, the watter ru[m]lit in sic a sort as all the hillis had fallin therin and this sich you can not deny

Fourthly you are indicted for passing to the Church of Dyce and there gathering a number of dead folk's bones and boiling them in water, and taking that water and thereafter washing William Symmer in the Hatton of Fintray (he then being lying deadly sick) and thereafter causing the said William's good mother take the said bones and cast them in the River Don, which when she had done, the water rumbled in such a manner as [if] all the hills had fallen therein and this you can not deny

But most of the charges against Janet were the usual sort. An example:


In the month of April, or thereabout, in 1591, in the "gricking" of the day, [that is, in the dawn,] Janet Wishart, on her way back from the blockhouse and Fattie, where she had been holding conference with the devil, pursued Alexander Thomson, mariner, coming forth of Aberdeen to his ship, ran between him and Alexander Fidler, under the Castle Hill, as swift, it appeared to him, as an arrow could be shot forth of a bow, going betwixt him and the sun, and cast her "cantrips" in his way. Whereupon, the said Alexander Thomson took an immediate "fear and trembling," and was forced to hasten home, take to his bed, and lie there for the space of a month, so that none believed he would live;--one half of the day burning in his body, as if he had been roasting in an oven, with an extreme feverish thirst, "so that he could never be satisfied of drink," the other half of the day melting away his body with an extraordinarily cold sweat. And Thomson, knowing she had cast this kind of witchcraft upon him, sent his wife to threaten her, that, unless she at once relieved him, he would see that she was burnt. And she, fearing lest he should accuse her, sent him by the two women a certain kind of beer and some other drugs to drink, after which Thomson mended daily, and recovered his former health.


She [Janet] and her daughter, Violet Leyis, desired ... her woman to go with her said daughter, at twelve o'clock at night, to the gallows, and cut down the dead man hanging thereon, and take a part of all his members from him, and burn the corpse, which her servant would not do, and, therefore, she was instantly sent away.

Like many other accused witches Janet Wishart was also a healer, and regularly gave out or sold charms and potions. In one case a woman said she had earned Janet's enmity by revealing to her friends a charm Janet had sold her. When Janet's son was in prison awaiting trial, one of his neighbors visited him for advice on how to rid her home of a troublesome spirit.

Janet Wishart comes across as a formidable woman. She was described as the leader of her family, more dangerous and powerful than her husband or son. People said that with her magic she murdered children, ruined people financially, coerced them to do her bidding by sending them nightmares. She is shown, more than any other accused witch I know of, playing up her fearsome reputation to get her way. Her anger was power.

And one more case, which perhaps more than any other gets into the minds of people who feared witchcraft and invoked the power of the law against witches:


Twelve years since, or thereby, Janet came into Katherine Rattray's, behind the Tolbooth, and while she was drinking in the said Katherine's cellar, Katherine reproved her for drinking in her house, because, she said, she was a witch. Whereupon, she took a cup full of ale, and cast it in her face, and said that if she were indeed a witch, the said Katherine should have proof of it; and immediately after she had quitted the cellar, the barm of the said Katherine's ale all sank to the bottom of the stand, and no had abaid [a bead] thereon during the space of sixteen weeks. And the said Katherine finding herself 'skaithit,' complained to her daughter, Katherine Ewin, who was then in close acquaintance with Janet, that she had bewitched her mother's ale; and immediately thereafter the said Katherine Ewin called on Janet, and said, 'Why bewitched you my mother's ale?' and requested her to help the same again. Which Janet promised, if Katherine Ewin obeyed her instructions ... to rise early before the sun, without commending herself to God, or speaking, and neither suining herself nor her son sucking on her breast; to go, still without speaking, to the said Katherine Rattray's house, and not to cross any water, nor wash her hands; and enter into the said Katherine Rattray's house, where she would find her servant brewing, and say to her thrice, 'I to God, and thou to the devil!' and to restore the same barm where it was again; 'and to take up thrie dwattis on the southt end of the gauttreyis, and thair scho suld find ane peice of claithe, fowr newikit, with greyn, red, and blew, and thrie corss of clewir girss, and cast the same in the fyir; quhilk beand cassin in, her barm suld be restorit to hir againe, lyik as it was restorit in effect.'

And the said Katherine Ewin, when cracking [gossiping] with her neighbours, said she could learn them a charm she had gotten from Janet Wishart, which when the latter heard, she promised to do her an evil turn, and immediately her son, sucking on her breast, died. And at her first browst, or brewing, thereafter, the whole wort being played and put in 'lumes,' the doors fast, and the keys at her own belt, the whole wort was taken away, and the haill lumes fundin dry, and the floor dry, and she could never get trial where it yird to. And when the said Katherine complained to the said Janet Wishart, and dang herself and her good man both, for injuries done to her by taking of her son's life and her wort [which Katherine seems to have thought of about equal value], she promised that all should be well, giving her her draff for payment. And the said Katherine, with her husband Ambrose Gordon, being in their beds, could not for the space of twenty days be quit of a cat, lying nightly in their bed, between the two, and taking a great bite out of Ambrose's arm, as yet the place testifies, and when they gave up the draff, the cat went away.