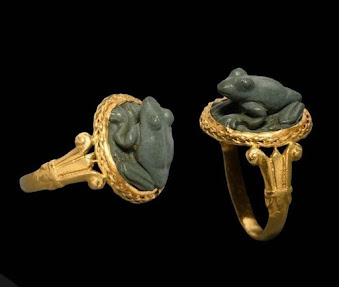 The strange career of U Dhammaloka, an Irish radical who wandered the world, eventually becoming a Buddhist monk and challenging British imperial rule in Burma.

A small cloud has long hung over Geoffrey Chaucer, in the form of what seemed like a rape accusation from a woman named Cecily Chaumpaigne. Feminist scholars have published dozens of articles re-interpreting his stories in the light of his supposed sexual misconduct. New evidence has been found that makes it seem that Chaumpaigne and Chaucer were co-defendants in a case brought by Cecily's former employer. Raptus in this case meant, not carrying a woman away for sex, but hiring her away from her old boss. (Original article, NY Times story)

The amazing mysteries of the common eel.

A palimpsest from St. Catherine's Monastery in the Sinai seems to contain part of an ancient catalog of stars by Hipparchus.

Challenging piece from Scott Siskind, review of a book about brain waves. Why do they exist, and what do they do?

Large Roman mosaic with scenes from the Trojan War found in Syria.

Tyler Cowen has some thoughts on why there is so much drug use in the US, legal and illegal.

Alaskan snow crab harvest has been cancelled because populations are down by more than 80 percent. Overfishing does not seem to be the cause, so it may be that the water in the Bering Sea is too warm for the crabs; the Arctic seas are one part of the world that is very definitely warming. (NY Times, CNN)

Births in the US went up a little last year, for the first time since 2007, which is being called the Covid Baby Bump.

From this post on opal tiaras I discovered Tiara Mania, a Tumblr devoted entirely to tiaras and "tiara events." I did not know that people are still making and buying tiaras. First I found this shocking, then I decided I was naive for feeling shocked.

Good review of the career of C. Vann Woodward, historian of the American South.

NY Times piece by a guy who "rescued" two injured piglets from a factory pig farm; he was prosecuted for theft, but a jury acquitted him. As he notes, Americans are increasingly uncomfortable with the way we raise animals for food. On the other hand, people screamed bloody murder when food prices shot up this year. I would note that the deaths of many young piglets is not entirely a product of factory farming, but an ancient problem with domestic pigs, who regularly have more piglets than they can care for and occasionally eat their own runts.

Libertarian-leaning conservative Tyler Cowen explains why he is uncomfortable with the American "New Right"; is essence, he thinks their obsession with the corruption of elites could end in our losing all mutual trust and ending up like Brazil, "a paradigmatic example of a low trust society and government."

In France, the government and private philanthropists are trying to move asylum seekers away from crowded Paris and toward rural areas that have been losing people for decades. Some residents of Callac in Brittany welcome the "new energy," while others fear crime, "radical Islam," and losing their Frenchness. One problem with placing refugees in small towns is of course that it is hard to live in the countryside without a car. (NY Times)

Short video from the 1970s in which a British journalist assigned to Belfast bemoans his fate.

Lots of talk about an impending Russian withdrawal from Kherson, possibly accompanied by blowing the Kakhovka dam and flooding the city. And more talk today.

Account of the recruitment of Russian prisoners to fight with Wagner, says that of the 30 who made it to the front, 28 were killed.

Interesting: “Some Russian sources linked to the Kremlin are now claiming that Russia was “tricked” into war in Ukraine. The new “theory” is that Russia was tricked by the West to invade Ukriane, and continues to commit war crimes due to US/UK “manipulation”, implying that it’s all US/UK fault.” Dark Brandon is a lot scarier and smarter than you knew.

Why there will be no invasion of Ukraine from Belarus.

Photomontage of badly damaged buildings in Ukraine that have already been rebuilt.

Post from the Wagner-affiliated Grey Zone account explaining that the problems with Russia's war can't be fixed by changing generals.

DNR volunteer Murz rants about the mishandling of Russian mobilization, which he says must be treason because nobody could possibly be that incompetent. Russian text here, which Google translate did ok with; English snippet here.

On the main Russian television news a reporter says that "there will be major territorial losses in the next two months."  Host Olga Skabeeva follows up by asking some important questions: "Why were we so wrong in the beginning? Why did we think that Zelensky would run, and NATO would not help?" Seems to portend more shake-ups to come.

And more serious discussion on Russian television: "worse than betrayal is conceptual mistakes."

As Russia buys missiles and drones from Iran and Ukraine attacks Belgorod and pressures NATO to supply them with long-range missiles, I wonder if we are headed toward a "war of the cities" like the one during the Iran-Iraq war, featuring months of destructive but militarily unimportant attacks on urban centers. I am also wondering if this would escalate over the winter, which leads me to a related question: how much fighting will we see over the winter? Will Ukraine try to leverage superiority in warm clothes and tents to launch more offensives against house-bound Russians?

Short video from the 1970s in which a British journalist assigned to Belfast bemoans his fate.

I'm genuinely unable to tell how much in earnest the journalists comments are. Throughout, he sounds convincingly like a stereotypically clueless and self-important Brit who is genuinely baffled by 'foreign' things and genuinely annoyed by it all - and then there are subtle little things I can't even properly point to which make me think, "Wait... is that actually just extremely dry sarcasm? Is this fellow actually NOT lacking in self awareness, and is, in fact, employing an extremely biting form of classic British self deprecation?"

In short, I can't tell if the man is a moron or a genius, and I'm not sure I'll ever find out.

Okay, only took a minute or two of digging deeper to figure it out - it's a skit.

The footage is from the 70s, but someone added new audio at some point. Original film can be found at Youtube, link below:

Worth noting, it appears that's only the source of some of the footage - there are other scenes from other sources I don't know mixed in (such as the checkpoint crossing, for example).

This detail suggests this is a recent skit - modern internet access to old archival footage would have made putting together something like this from multiple sources MUCH easier.