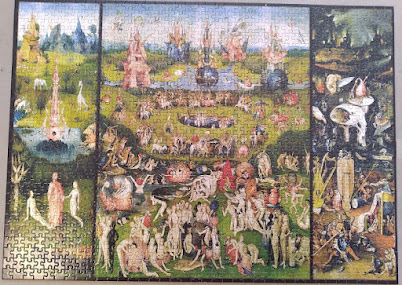 One of my Christmas presents, which my daughters and I put together this week. Very interesting because even though I knew this painting before, I kept finding more little things that I had not known about, or had forgotten. 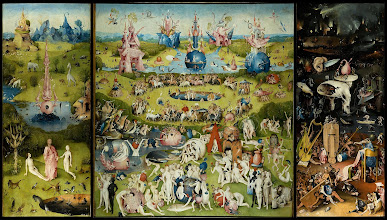 The triptych was done around 1500 by Netherlandish painter Hieronymus Bosch, about whom very little is known. This makes interpretation of the painting a game anyone can play.

The left-hand panel shows Adam and Eve with Jesus in the Garden of Eden. 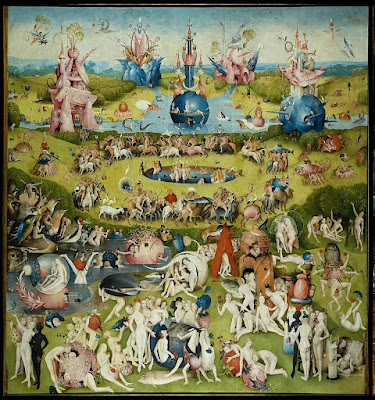 The central panel is called The Garden of Earthly Delights, but there is no agreement about what it depicts or how we should view it. It looks like an earthly or semi-earthly utopia, people frolicking happily without worries, or clothes. Art historians have dreamed up theological or Biblical contexts within which this could be just that, a very happy place. Some experts think, though, that it is a depiction of sin, with the hell panel there to remind you where it leads. But then yet again Bosch's depiction of hell doesn't look all that bad, with giant musical instruments and whimsical figures like the ones who populated medieval manuscript margins. And this just looks too happy to me to have been dreamed up by the sort of person who obsesses about the foulness of other people's fun. So, a mystery. 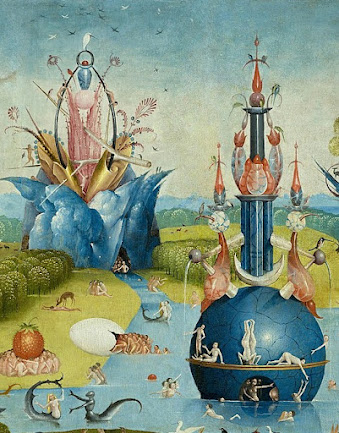 This is a famously weird painting, but how original is it, as art? There isn't anything else exactly like it. But many of the whimsical elements could have been copied from manuscripts, and there was a whole genre of depictions of Folly in the late 1400s, with which Bosch's garden has much in common. One thing that strikes me as unusual is the half architectural, half organic towers in the back, with their curlicues; I can't remember ever see anything like this before. Even allowing that most of the individual elements were cribbed from manuscript margins, the whole composition is strikingly original. 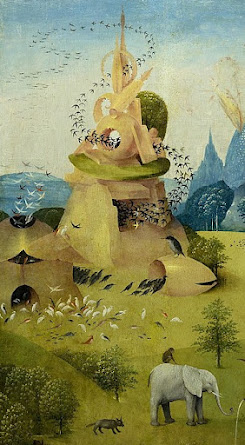 One of my discoveries from doing the puzzle was this charming elephant. Incidentally the mountain with the birds is a standard medieval manuscript image, brought in from the Middle East. 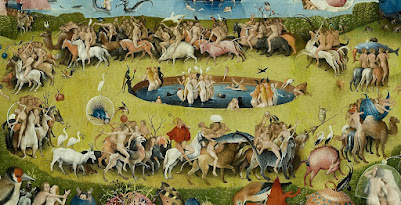 In the midground of the Garden, women frolic in a pool while men ride around them in troops, apparently trying to get their attention. 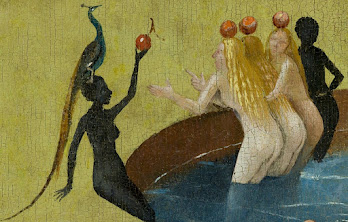 Interesting that several of the figures in the Garden are African, doing exactly the same things as the white figures. 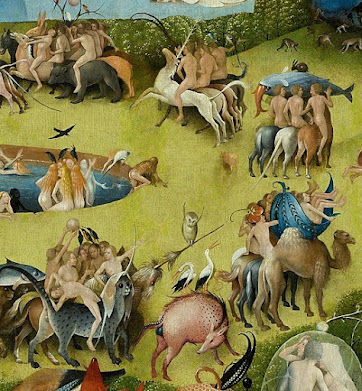 I like the guys who thought a really big fish would impress the ladies, although you also have to give points to the guy riding the cat-unicorn. 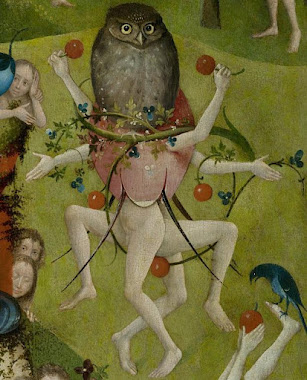 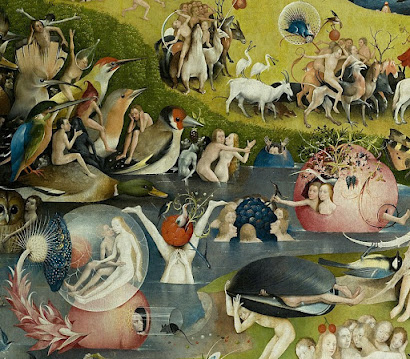 More strange details. And a very good way to spend time with my daughters.
Posted by John at 9:01 PM

Bosch's depiction of hell are composed of pretty much standard Christian interpretations of "sinful" activities. Music was, and still often is, considered as a corrupting influence. If you look inside the 'ass' of the egg man, it's basically people in a tavern, there's a wine barrel, etc. Wine and song were the path to Hell.
I mean, we may look at it and say it looks great with all the drinking and music, but it's not what Bosch meant.