I didn't hear about Patrick O'Brian's series of sea novels until about 15 years ago, maybe because of the 2003 movie. I checked in my library but all I found was one volume, maybe the 15th in the long series. It was boring. I mentioned this to a friend who is a fan and he said, "Yeah, he should have stopped writing long before the end. You should read one of the first few."

Last week I noticed that my library had purchased new copies of the first ten book in the series, so I took the first one home: Master and Commander, published in 1969. I just finished it and I liked it, but I don't think I will rush out and get another.

The story opens in 1800 in Minorca, one of the chief bases of the British Mediterranean fleet. The two central characters are Jack Aubrey, a naval officer, and Stephen Maturin, an Irish physician who is broke and needs a job badly enough to sign on as a ship's surgeon. Aubrey receives his first command, a sloop called the Sophie, and sets off cruising the Spanish coast in search of trouble. 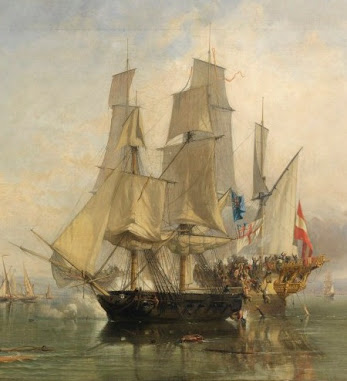 The sloop HMS Speedy, on which the Sophie was based,
capturing a Spanish warship, a battle which is recreated in
"Master and Commander"

There are two remarkable things about the book, and, I gather, the others in the series. First is O'Brian's astonishing knowledge of Napoleonic seafaring and naval warfare. This is actually what attracted me to these stories. I have long been fascinated by the lore that sailors and shipwrights built up through the centuries of European expansion, allowing them to build vast fleets of wooden ships and sail them across all the oceans of the world. Not that I have room in my brain for much of that knowledge, but it intrigues me that it existed and has since been lost. Anyway Patrick O'Brian knew the rigging of such a ship as well as anyone in the twentieth century, and he immerses you in world where the wind and the power to harness it determine everything. The battle scenes are also as accurate as O'Brian could make them, since he copied them all straight out of admiralty reports, figuring that only by strict fidelity could he convince readers that such insane things really happened.

More interesting to me was O'Brian's recreation of the mental world of his protagonists. The British navy of that period was a fascinating monster. Engaged in a brutal struggle for world domination, it practiced a savage level of violence and held its officers and men to a standard of courage which seems to me downright insane. And yet it was much more than just a fighting force. It was a vast social world with its own politics, its own rituals, its own language. It was a gigantic career ladder that many men were ferociously determined to climb. I think O'Brian's Captain Aubrey splendidly captures the mindset of a man who thinks about battles half in terms of how to win or at least survive them, and half in terms of how fighting or not fighting them will impact his career.

I was even more impressed by the mind of Stephen Maturin. He strikes me as a spot-on recreation of a physician of the period, half practical knowledge and half Galenic theory; one of my favorite bits in the book is when he starts adding foul-tasting herbs to his medicines because the sailors think potent medicine should taste bad. His naturalizing is also terrific; he is boundlessly curious about everything from the distribution of plants to the anatomy of porpoises, but it all seems like random knowledge, with no meaningful theory or structure. I loved him.

The writing is pedestrian, and the plot is more a series of events than a story. But if you want to spend a few hours in the world of wooden ships and the violent men who sailed them, I know of no better way.

I rather enjoyed the Master and Commander series myself, although the later books do kind of meander and lose some focus and grip on the reader.

I feel you hit the series' key qualities squarely on the head - deeply interesting main characters, and astounding historical veracity. I especially like the accurate depictions of the vernacular and "jargon" of the period - and in particular I have great fondness for the banter between Aubrey and Maturin, and was deeply amused by what fans of the series fondly call "Aubreyisms", where he (and others) unwittingly mixes metaphors to amusing effect.

Not to be confused with Patrick O'Brien, the painter, who (believe it or not) paints almost exclusively Napoleonic ships and battle scenes. I know it's a big, wide world, but what are the chances?

On the other hand if you want an absurd depiction of 19th century British army read The Flashman Papers by George MacDonald Fraser. Like O'Brien the author goes into incredible detail depicting Army life using real historical events. The main character Harry Flashman is a self serving coward that somehow always manages to land on his feet.