The Day the Dinosaurs Died? 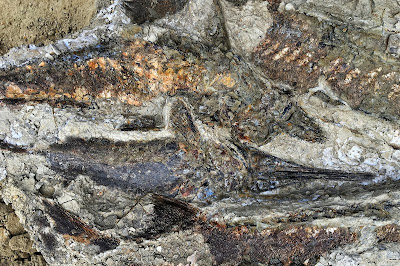 Fascinating fossil discovery in North Dakota, piles of fossils in what had been a freshwater pond but was somehow overwhelmed by water from the sea and then clogged with sediment in one catastrophic event. The picture above shows the jumble of fish fossils that characterize the site. This may (emphasis on the "may") be the signature of the asteroid impact that ended the Cretaceous Period and with it the dinosaurs and many other animal species:


In the deposit, the team discovered an ancient freshwater pond whose occupants had been quickly cemented together by waves of sediment and debris. The fossils include sturgeon and six-foot-long paddlefish, their scales intact but their bodies ripped and smashed; marine mollusks; leaves and tree fronds, and the burned trunks of trees. The fish carcasses were not bloated, decayed, or scavenged, suggesting that they were buried quickly — and that few animals were left alive after the cataclysm to come digging.

The fossil deposit also teems with tektites, tiny glass beads that are the telltale fallout of planetary-scale impacts. Fifty percent of the fossilized fish were found with tektites in their gills, as if the fish had inhaled the material. Also recovered were tektites trapped in amber. Their chemical composition was unchanged in 66 million years, and it closely matched the unique chemical signature of other tektites associated with the Chicxulub event.

The top layer of the fossil bed was found to be rich in iridium, a rare metal that Dr. Alvarez had originally identified at other sites as arising from the giant object that struck the Earth. Iridium, a precious metal belonging to the platinum group of elements, is more abundant in meteorites than in terrestrial rocks. 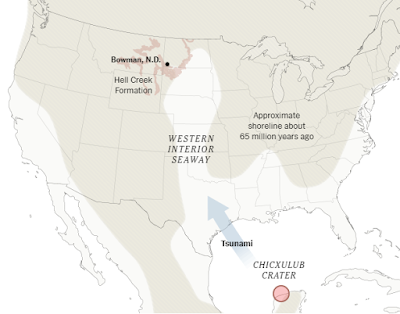 The excavators, led by Robert DePalma, theorize that the pond was drowned by the great tsunami that spread out from the asteroid impact site, and then filled by debris raining from the sky.