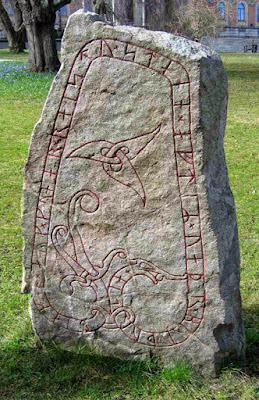 Compared to most of the people of history, the Vikings acted rather strangely. They were almost absurdly brave, willing to risk everything for adventure and glory; they restlessly sailed all the seas and rivers within their reach, voyaging far beyond anywhere profit might take them; they set up grand memorial stones for those who died on mad foreign adventures but erected no monuments for those who stayed home. 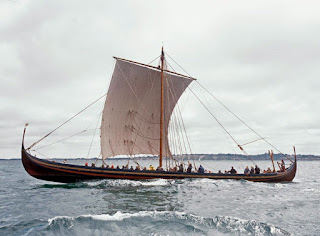 Historians think that underlying this behavior was a particular socio-political system. The dominant political figures were kings and jarls, great men who owned halls and ships and lands. These aristocrats surrounded themselves with warriors who ate in the halls, crewed the ships, and fought their lords' battles. According to the sagas, some of these warriors were young men who stood eventually to inherit lands of their own, but many were landless younger sons or outsiders from other parts of the Viking realm. Among these warriors the competition for status was intense, and they vied with their companions in bravery and feats of arms, hoping to win the lord's favor and thus to obtain wealth and lands for themselves. Viking women, meanwhile, were notably powerful and outspoken and seem to have been picky maters; many Viking stories revolve around men competing for the favor of noble women, perhaps partly because the doweries they commanded would allow their husbands to advance from landless warrior to landed nobleman. Underlying this competition seems to have been a shortage of land, not in any absolute sense but in the social sense that only a few people could obtain the resources necessary to become or remain members of the elite. 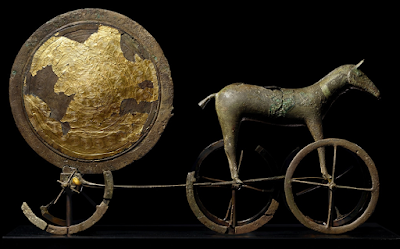 So far as we can tell, this system was not particularly ancient. The society of Bronze Age Scandinavia does not seem to have been dominated by prominent lords, since there are no fortresses or notable concentrations of wealth. The religious life seems to have been dispersed through the countryside, and certain holy bogs and groves were more important than temples. The most common religious artifacts were sun symbols, reflecting the old neolithic agricultural rites. 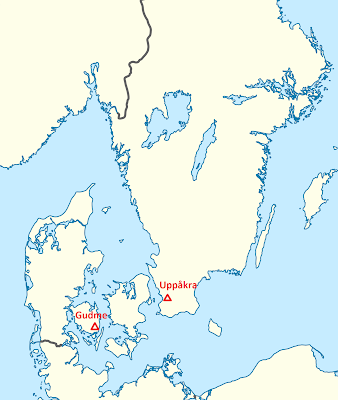 Over the past thirty years Scandinavian archaeologists have devoted a lot of attention to how and when the institutions that underlay the Viking world took shape. They have zeroed in on the period of the late Roman Empire, 250-450 AD. It is in this period that we see the first settlements that look like royal seats, with treasure troves and comparatively grand buildings. The two best known such sites are Gudme in Denmark and Uppåkra in Sweden. 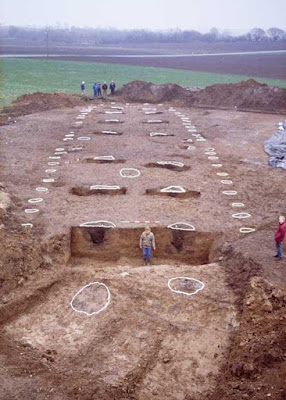 Gudme was occupied from around 250 to 650 AD. It consisted of a magnate's residence surrounded by a sort of dispersed town of fifty smaller farms, likely home to around 500 people in all. The name, which goes back to Medieval times, seems to mean "home of the gods." In the 1990s archaeologists uncovered the grand hall that was at the center of the site, 47 m long and 10 m wide (155 x 33 feet). Look closely at this image and you can see that the post molds (the dark stains left by the decayed posts) are bigger around than the person standing next to them; the roof of this hall was held up by large trees. The posts were not evenly spaced but arranged so as to create a single large room in the center, no doubt where the lord lounged on his High Seat to receive his followers and hear bards extol the deeds of his ancestors. Nearby was another exceptional building, smaller but equally well built, that was probably a temple. Those were the only two buildings in the center of the site; all the barns, sheds, and so on were relegated to the surrounding farms. 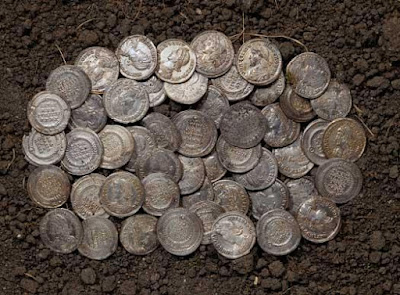 Excavation around these structures has recovered hundreds of gold and silver objects. Much of it came from the Roman world, like this hoard of 239 coins from the 4th century; 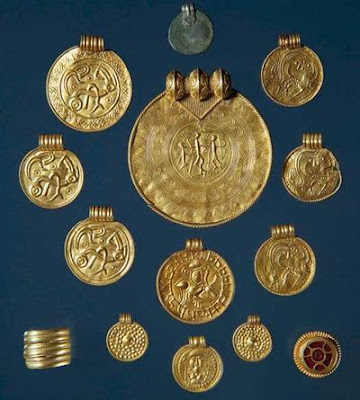 much of the rest, like these gold pieces, seems to have been made in imitation of Roman forms. A great deal of gold- and silver-smithing was done at Gudme, along (most likely) with other luxury crafts. 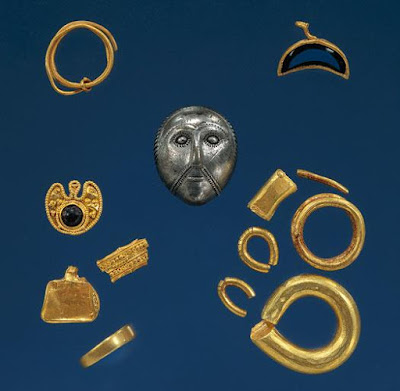 Adjacent to one of the posts of the temple building was this votive deposit, probably buried as a sacrifice when the building was erected. 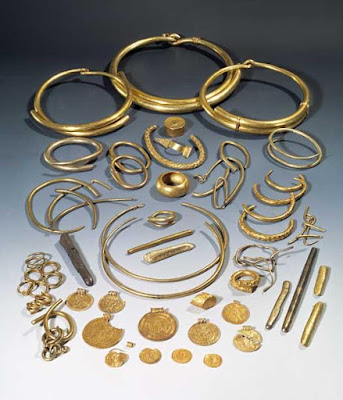 The site is very impressive, and the argument that was the home of a king or jarl on the medieval model is strong. It seems notable that the site had such strong connections to Rome. Roman influence certainly played a part in the rise of Scandinavian kings, although how direct and important that influence was are disputed. Some think the Romans pretty much created these kings by singling out certain chieftains for favor and gifts, while others think that certain local lords enhanced their status by cornering a big part of the trade in luxury goods with the south. 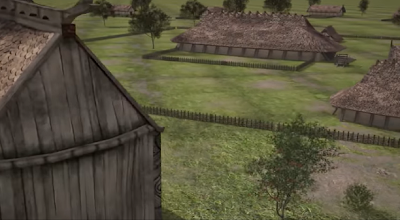 Uppåkra in southern Sweden is a much older site, going back to the Bronze Age. Around 450 AD it also became the seat of a king or jarl. A mighty hall was built, more than 40 meters (130 feet) long, and it was surrounded by dozens of other structures. 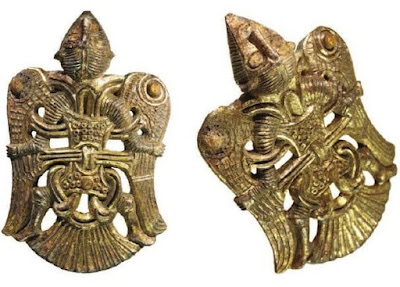 Intensive metal detecting around the site has let to the discovery of more than 30,000 objects of gold, silver, and bronze. The most famous is this gold amulet of a man wearings wings, said to be Weland (or Volund in Swedish) the Smith in his suit of feathers. I could tell you what I think of the suits of feathers one finds in several old European stories, but for that you'll have to wait for my novel. 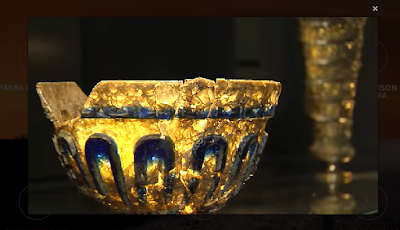 Less Roman material has been found at Uppåkra than at Gudme, but there have been several notable discoveries, such as this glass.

The most famous thing about the site is another building that stood near the hall. As you can see in the simplified plan above, the building consisted of an outer wall that sat in a trench and four massive inner posts that were very carefully supported on stones as if to hold up great weight. 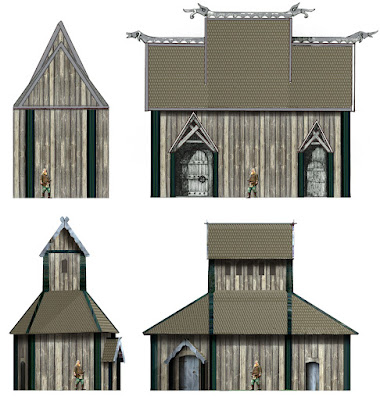 Most archaeologists think the point of those posts was to hold up a taller central section, the same technique used in some medieval stave churches. Above are two different reconstructions. 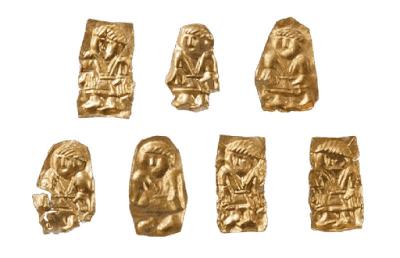 The building obviously had great ritual significance; more than 200 of these small gold foils (called in Swedish "gullgubber") were buried in the foundation ditches and around the central pillars. These temples were one of the key attributes of Viking Age royal seats; control of the temples (and later of churches) was one of the main sources of their wealth and prestige. As I said, temples do not seem to have been very important in the Bronze or early Iron Ages, so here is a clear sign that medieval kingship was forming. 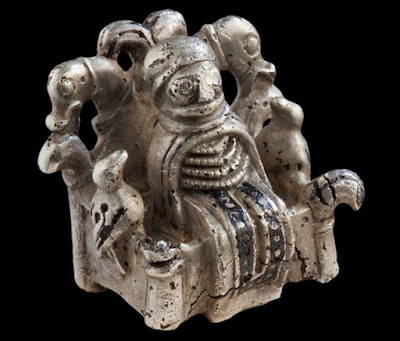 As these jarls and kings gathered more of Scandinavia's wealth and power to themselves, they created an ever-intensifying, increasingly violent competition for status and resources that, when coupled to the new technology of the longship, eventually drove the great raiding and trading expeditions of the Viking Age. There was also an ideological side to this military expansion, expressed through the cult of the death god Odin and the implacable fates, but that will have to wait for another post.
Posted by John at 10:58 AM