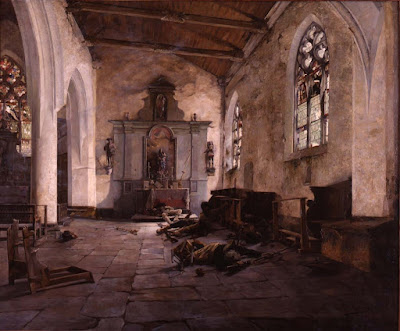 Last night I was captivated by this 1886 painting, La Chapelle de la Madeleine à Malestroit (Morbihan), 15 nivôse an III by Alexandre Bloch. The revolutionary date 15 nivôse Year III is January 14, 1795 in the more usual Gregorian system. So, I thought, this depicts some now-forgotten event of the French Revolution. But which? 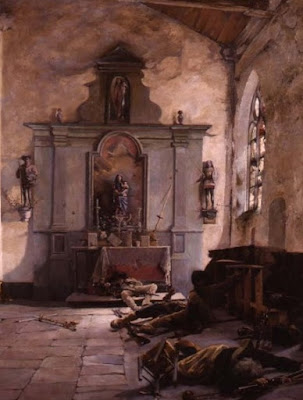 It was not hard to track down a basic description on wikimedia:


A section from a Republican regiment led by general Canclaux massacred a group of Chouans sheltering in a chapel. The Chouans fought to the death. The picture shows the interior of the chapel after the departure of the Republican troops (whose storming of the building is symbolized by the hat with the tricolor cockade left abandoned on the ground). The dead bodies and broken church furnishings testify to the violence of the action.

I confess that I did not find this as helpful as I might have if I had known who the Chouans were; or if indeed I knew where Malestroit was. So I kept clicking. 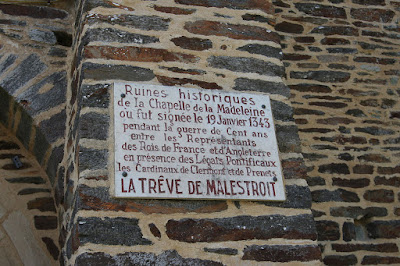 Malestroit is a small town in Brittany, in the Department of Morbihan. The now-ruined monastery began as a leper asylum in the 12th century, but by the 1300 the lepers were long gone and the place was a priory of Benedictine monks. The chapel was the setting for another historical event as well, a treaty between the French and the English during the Hundred Years War. The chapel was abandoned in 1870. According to various sources, the chapel's "remarkable" stained glass depicting the legend of Mary Magdalene was purchased by Emile Zola, who installed it in his office. Later, the sources tell us, the windows were sold to either an American museum or an American collector. The discrepancy is somewhat puzzling because otherwise every account I have seen is word for word identical, as if copied from the same source. You would think that if they were in a museum I would be able to track them down online, and since I have not been able to I suspect "collector" is the correct version. 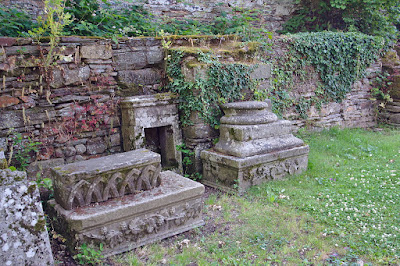 The Chouans were one of the royalist rebel groups who rose up against the revolutionary government after the revolutionaries tried to impose a military draft (the levee en masse) in 1793. These rebels were most widespread in the west of France, and English-language books the whole affair is referred to as the Vendée.

The Chouans took their name from their first leaders, the brothers Chouan, especially the elder brother Jean. Chouan was a sort of nickname acquired by Jean Chouan's grandfather. Opinions differ as to its origin but most historians agree that it is a dialect word for the tawny owl; it is said that the grandfather acquired the nickname because he was so good at imitating its call. Thus these rebels were "the Owls" or "the Silent Ones," a terrific name for a band of guerrillas. 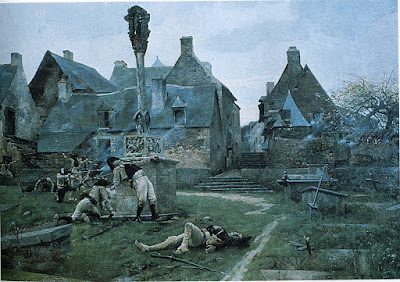 This was a civil war waged with great intensity and great violence on both sides; wikipedia informs us that


In the district of Fougères, in conflict between some 2,000 Chouans and a fluctuating number of Republicans, 219 people were assassinated or executed by Chouans and 300 by Republicans.

A total that does not including deaths in battle. (Painting by Alexandre Bloch of another incident in the same uprising, the defense of Rochefort.)

One of the interesting things about this revolt is that neither contemporary observers nor modern historians have been able to figure out what the rebels believed. They certainly hated the revolutionary government, but their attachment to the French crown was not particularly strong. The future Charles X of France, in exile in London, sent the Comte de Puisaye with a general's commission to assume the leadership of the rebels. De Puisaye arrived on a British naval vessel with a shipload of guns for the Chouans and a promise of more, but he was never able to get the rebel leaders to obey him. After a series of defeats he returned to London complaining that the rebels were actually anarchists, not royalists. 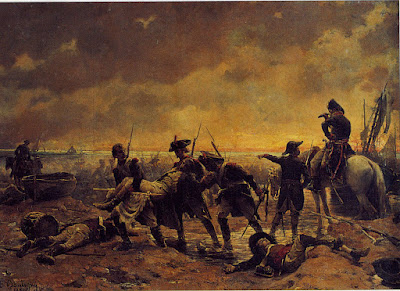 Brittany after all was one of the most traditional parts of France but part of its tradition was centuries of opposition to royal centralization; one suspects that the old hatred of commands from Paris was as big a part of opposition to the National Convention as royalist ideology. (Nineteenth-century painting of the Battle of Quimper, the decisive defeat of the Chouans.)

And this explains, I think, why the revolutionary regime was able to survive for years despite foreign and domestic opposition. They knew what they were fighting for: liberté, égalité, fraternité, and the future. Their opponents were a mishmash of royalists, papists, moderates, regionalists, and so on, with no unified principles until Napoleon found one in militant French nationalism.

Interesting where an old painting can take you.
Posted by John at 2:47 PM

My impression, FWIW, is that the historians have a pretty good understanding of what the western rebels were fighting for--which, as today, could be best defined by what they were against: they hated the Levee (as you say), they hated the Civil Constitution of the Clergy, and they hated their local bourgeoisie, which had identified itself with the Republic and was using the devolution of feudalism to extend its power and property-holding into the countryside. One might say, a little wickedly, that they hated the moralistic hectoring of entitled elites.

It's true monarchism was a weak element in the rebels' motivation, but I've been much impressed over the years by how easily monarchism in France basically folded and how little monarchism as such was a factor in French revolutionary politics. The dreaded intendant system pretty much just downed tools and went home over about a fortnight in July 1789, without anyone even targeting them or telling them to go. John Hardman, among others I'm sure, argues the monarchy was essentially broken by the privileged estates already by late summer 1788. On a different front, Paul Schroeder points out that Austria, Russia, and Prussia, far from leaping to defend monarchy in France, saw the revolution as an opportunity to further their favorite business of carving up Poland (France having been Poland's big advocate in previous decades).

I wouldn't say the monarchy was nothing. But I'm impressed at the weakness of feeling, positive or negative, it seems to have evoked (compared to, say, the social hatreds within French society). Part of this surely has to do with the feather-brained, ideologically shallow aspect of monarchy that John evoked in his Jacobite posts a few months ago. But I don't think that entirely solves the puzzle of either the long survival or the rapid fall of this very old and nearly universal, almost default, human system.