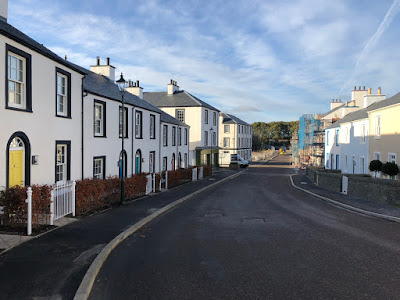 Tornagrain New Town is a major new housing development outside Inverness in Scotland, not far from the Culloden Battlefield. 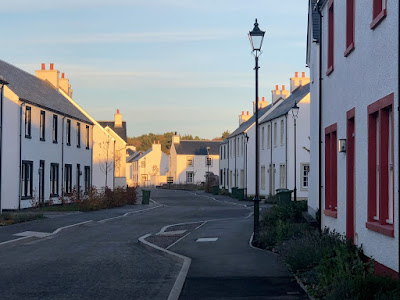 The style is what would be called in America "New Urbanism," but in Britain it's more like "New Villagism." The idea is to recreate the geometry and feel of small town life, instead of anonymous suburbs spreading indefinitely in every direction. The eventual plan is for a community of 12,000 people. 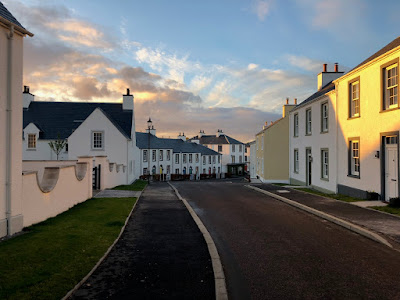 The owner and developer of Tornagrain is the Earl of Moray, and one of the big promoters of this kind of development is Prince Charles. Communities like this are the solution being pushed by the British old guard to problems like the housing shortage and the loneliness and alienation of modern life. 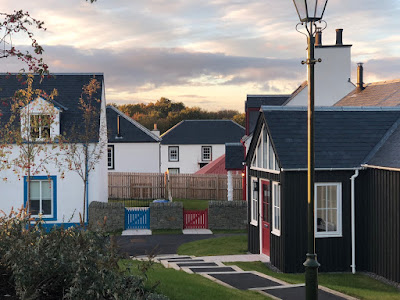 I doubt charming towns are really the solution to modernity's spiritual woes, but, hey, it can't hurt to live in a pretty place. 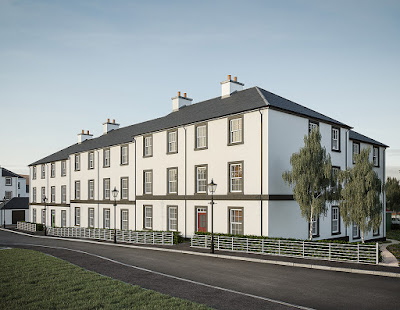 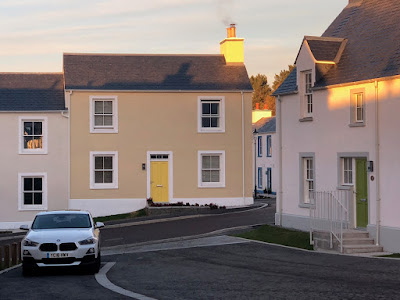 I learned about this from the blog of designer Ben Pentreath, who works on the project. Pentreath's blog is a fascinating look at the British elite, people who have flats in London and country places with fabulous gardens, meet their chums for lunch at the Duke of Cambridge, admire restored 1950s Bentleys and Morris Minors, tour estates with the owner, who is referred to by a title like "the indomitable Zara", as guide, and generally wallow as their fabulous Britishness.

I have a strongly ambivalent relationship with these people. On the one hand I love their gardens and their houses, and I share with them a passion for preserving Britain's historic buildings and landscapes. On the other hand their devotion to Victorian landscapes seems to ignore the basic economic realities of both Victorian times, when these landscapes were maintained by badly paid semi-serfs and the nation had to import most of its food, and our own, when the whole apparatus must be constantly subsidized by cash flows from London and the rest of global capitalism. This goes back at least to the eighteenth century, when the gentry began marrying the daughters of rich merchants or Jamaican sugar planters, and continues to this day; I read at least once every year about an amazing historic house restored by a new owner who made a pile of money is some kind of stock speculation. 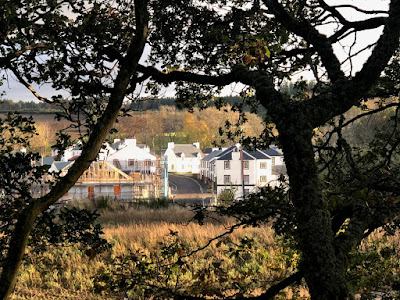 And, really, what does this kind of small Britain nostalgia have for most of its inhabitants, or the world's? Tornagrain looks like a great place for 12,000 people to live, but in Britain millions of people live in crappy flats, many in dangerous towers like the one that burned in London a few years ago; not much hope we'll be able to house them in villages. Nor is there much hope we'll be able to feed 7 billion using Victorian methods. Sometimes the whole back-traditional-farming-and-traditional-communities thing feels like a fad for a few rich people. But I suppose it's too much to ask that the Earl of Moray would solve all our problems, and at least he has provided some housing within the reach of ordinary working folks. So I will let this be what it is, a housing development prettier and better-thought-out than most others, and give thanks that someone with power cares about preserving the landscape that much of Britain a wonderful place.
Posted by John at 8:25 AM