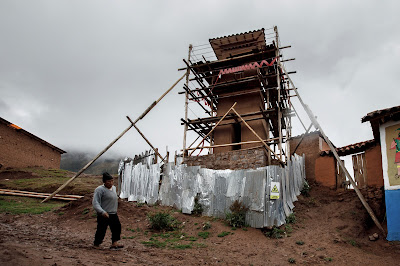 The Getty Conservation Institute is one of the most impressive hi-tech organizations in the world. Wherever anyone is pioneering techniques to conserve art, whether it's corroding Roman silver or crumbling Greek mosaics or contemporary installations made of trash, the Getty is there. Backed by their astonishing endowment, and in need of restoring their reputation after being caught buying looted antiquities, they are generously pitching in with restoration projects all over the world. 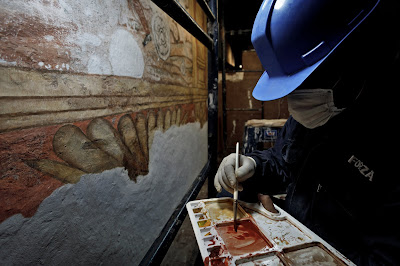 Today the Times has a feature on one of their projects, the restoration and reinforcement of colonial adobe churches in Peru:


To come up with a strategy for strengthening Kuño Tambo’s church with a mix of new reinforcements, Mr. Torrealva and a team of engineers ran over 300 small-scale physical tests of a handful of techniques used for centuries by Peruvian builders.

Then, working with Paulo Lourenço, an engineer at the University of Minho in Portugal, the team built a detailed virtual model of the church. They ran simulations of the building with different arrangements of reinforcements, under multiple kinds of seismic stress.

That resulted in a plan to outfit the church with 11 new tie beams that span the building’s width, a new collar beam below the roof’s circumference and three L-shaped braces called keys inserted into each corner to tie the walls together, all from regionally sourced eucalyptus wood.

Along with refreshed stone foundations, new adobe bricks, three new buttresses and a new A-frame roof, some parts of the church and the bell tower were also wrapped in a nylon-like mesh and then covered with mud plaster for extra support. The mural paintings have also been the subject of their own conservation process; many churches across the region host similar artworks.

As the conservation was carried out at the church over the last year, the Getty team also ran a series of intensive training workshops at Kuño Tambo to put this knowledge into the hands of the village’s residents, as well as other Peruvian conservators and engineers.