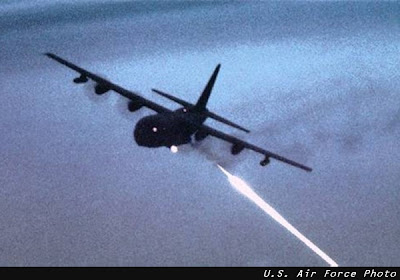 As part of our UN mandated mission to "protect civilians" in Libya, we have started sending ground attack aircraft (A-10s and AC-130 gunships) to rout government soldiers out of their positions. The Washington Post:

The U.S. military dramatically stepped up its assault on Libyan government ground forces this weekend, launching its first attacks with AC-130 flying gunships and A-10 attack aircraft, which are designed to strike enemy ground troops and supply convoys, according to senior U.S. military officials. Their use, during several days of heavy fighting in which the momentum seemed to swing in favor of the rebels, demonstrated how allied military forces have been drawn deeper into the chaotic fight in Libya. A mission that initially seemed to revolve around establishing a no-fly zone has become focused on halting advances by ground forces in and around Libya’s key coastal cities.

I think it would be rather silly now to pretend that we are not trying to help the rebels oust Qaddafi from power.
Posted by John at 8:04 PM