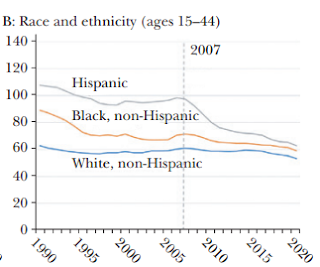 The decline has taken place in every state; in every religious, ethnic, and political group; in rural areas, suburbs, and cities. And while the overall birth has declined in all those groups, the birth rate for women over 30 has risen in all of them.

When it comes to what people believe; Americans seem to be radically divided against each other. But in terms of how we live, we are more and more the same.