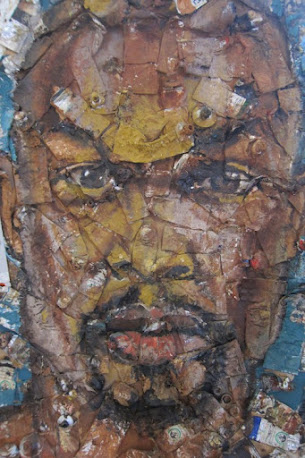 Chaz Guest (born 1961) is an African American painter much admired by optimistic black celebrities like Oprah and the Obamas. Above, a recent self portrait, which is my favorite of the works I have found. 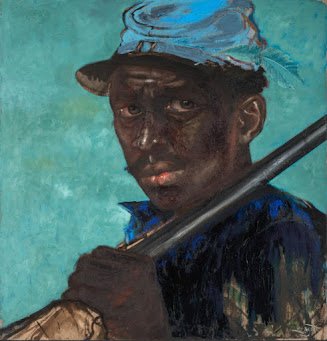 Guest was a competitive gymnast in his youth and his college career was mostly about getting good enough grades to stay on the team. After he graduated he had no clue what to do with himself. (Ghost, 2018, from Guest's web site) 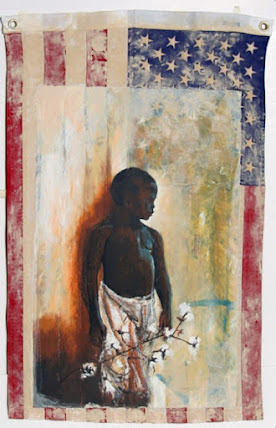 Interested in fashion, he tried the Fashion Institute of Technology in NYC but couldn't cut it. On the advice of an acquaintance he tried fashion illustration and ended up working for a fashion magazine in Paris. Another acquaintance saw his work and said, "you should try painting." (American Boy, 2008) 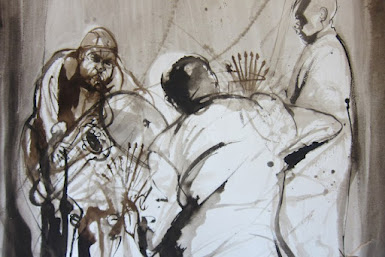 So he took up painting, with no training beyond the fashion illustration class he took during his brief stint at FIT. Somewhere along the way Guest picked up a great love of Japanese culture; in most of the photographs you can find online he is wearing a kimono. He taught himself to draw with a brush and ink, Japanese style, which you can see in works like this one. 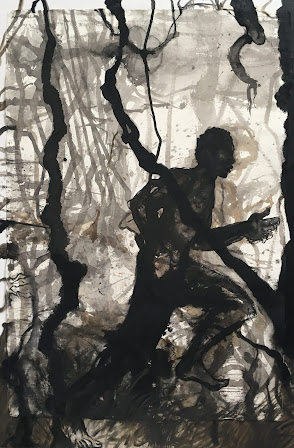 Even though he has been a success, I think Guest's lack of training shows; I think there are lots of painters around who can render faces better than Guest can. Where he excels is at telling a certain kind of story, one that is about race in America without being divisive, angry, or depressing. This is Running Past Himself, which obviously refers to old images of escape from bondage but according to the painter refers to the struggle all of us fight to escape from our inner demons. 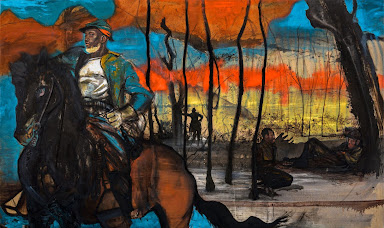 The Planning, 2021, part of a series titled Buffalo Warrior.

Talking with Chaz Guest was a rich and engaging conversation about storytelling and images. We spoke of how to create characters and narratives that address the history of race in America, but in a nuanced language that spoke to this specific history and transcends it to speak of people throughout history. We spoke of hardship and enslavement, resistance and freedom. When I mentioned that his character “Buffalo Warrior” was a black superhero, he said that he did not see him that way, “ He is a Universal Citizen of the Earth and a fighter for all. I do not see him as black, I think of him as tall, dark and handsome.” 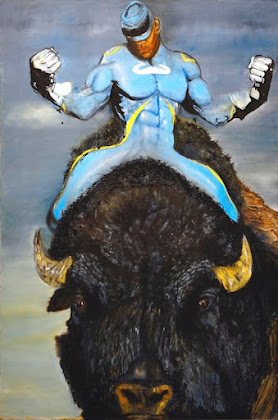 Some of the Buffalo Warrior paintings are superhero comic-ish, like this one, and apparently there is talk of a movie about this character. 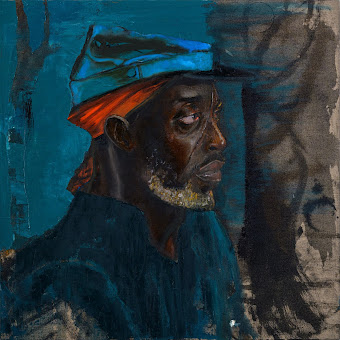 Another reason Guest's latest show is getting a lot of attention is that actor Michael K. Williams, who played Omar on The Wire, sat for Guest just two weeks before he died of an overdose in October. Williams' face appears in some of the Buffalo Warrior paintings, including the one above, The Lonely Night. Guest recently summed up his career like this:

I decided not to use my time trying each day to be a part of the art establishment. I thought that the work would have to speak for itself. If I just painted from my heart, my roads would be easier.