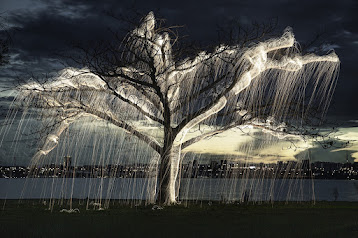 If you're curious about hypersonic cruise missiles and how much they will change warfare, Youtuber Millennium7* will explain their significance to you in 8 minutes.

Today's gimmick: making art by bruising bananas. Thanks to Instagram this banana artist is now a lot more famous than most painters and sculptors. (Washington Post)

Jamelle Bouie has a long, interesting piece in the NY Times about all the quantitative work historians have done on the trans-Atlantic slave trade, culminating in the Slave Voyages Database. All this data is fascinating but the level of abstraction makes some people worry that this approach only dehumanizes captive Africans all over again.

Short Tyler Cowen post on how the shifting media landscape has changed our culture.

Cheslie Kryst was Miss USA at 27, dead by suicide at 30. None of the articles I have read yet says anything meaningful about the suffering she must have endured behind her glittering celebrity facade, which bugs me; are we still in a world where depression is some kind of shame?

At the Washington Post, an amazing long feature on Africa's biggest cities. Since Africa is the only continent where the population is projected to keep rising, by 2100 it may have most of the world's biggest urban areas. Life in Lagos sounds like hell to me, but people keeping moving there by the thousands every week.

An African immigrant's pizza wins him a big following in Italy.

The old habit of deifying humans endured into the twentieth century. What was it about? (Washington Post)

Staging a show of Francis Bacon's paintings in Soviet Moscow.

Musa al-Gharbi says that America is not a post-truth society or on the brink of civil war, but is undergoing an epidemic of contempt for pollsters.

Kevin Drum: "I was brought up to believe in evolution, quantum mechanics, and the median voter theorem."

Excellent piece by Ross Douthat in the NY Times about the anti-democratic tendencies on both the left and the right in America. (The liberal version is the Progressive tradition of decision-making by "experts.")

In the non-English-speaking world, English-language music is losing ground to other languages.

Virologists sampling New York City's sewage have identified several strange coronavirus variants that have never been found in a human patient. Are these variants that don't make people sick? Or are they evidence that the virus is spreading and mutating in some other species, perhaps rats? (NY Times)

NYC is building an abolitionist monument, but the design is very controversial. There is no sculpture, just a "text based art installation," and many Black New Yorkers really want more statues of Black people. Debates over public monuments show clearly that for many people, figural sculpture remains supremely powerful. (NY Times; project web site)

Use of Facebook stops rising, and its stock plunges (Washington Post; Reuters). TikTok has taken over the social media worlds of my children.

3D Model of the Roman Forum in the time of Augustus, 10-minute video tour.

Well, reading through the link, it apparently was abruptly announced, and there was no system in place to assist farmers in transitioning, so I'm not remotely surprised it failed.

Cheslie Kryst was Miss USA at 27, dead by suicide at 30. None of the articles I have read yet says anything meaningful about the suffering she must have endured behind her glittering celebrity facade, which bugs me; are we still in a world where depression is some kind of shame?

Yes. Absolutely, we are.

Our economy is outright hostile to people suffering from mental illnesses like depression. We grudgingly accommodate physical illnesses in workers, but we have virtually no tolerance for mental health problems.

You're depressed and struggling to get up in the morning and go to work? Tough luck! For most workers, either you get you suck it up and push through it, or you quickly burn through your available time off and then ultimately lose your job - an outcome which is virtually guaranteed to perpetuate or worsen your depression, both for reasons of discouragement, and for reasons of losing health insurance and thus access to anti-depressants and therapy.

Healthcare in this country is some of the worst quality and highest cost healthcare in the industrialized world. The mentally ill are placed under a cruel burden of trying to afford expensive treatments that don't really help them. Like so many other aspects of American life, healthcare has been transformed largely into a means of extracting rent, rather than providing a necessary service.