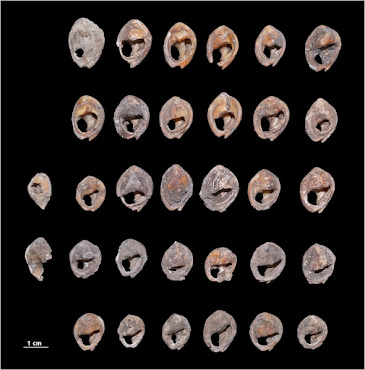 These shells, found in a Moroccan cave, have been dated to around 150,000 years ago, making them the world's oldest jewelry. 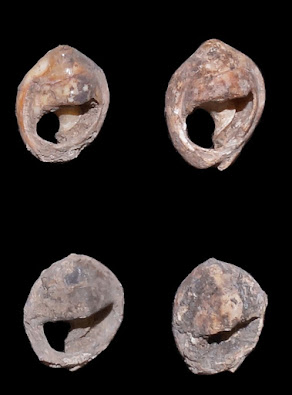 The case that they are jewelry is quite strong, because the shells are polished in the way that shell beads get from being worn on a string.

This is important because for a long time archaeologists thought evidence of symbolic behavior in humans (jewelry, art, funeral ritual) began around 60,000-70,000 years ago. This date held firm for decades, and people started to speculate that some sort of dramatic event must have taken place to launch the change. One version was the invention of language, and another was some sort of macro-mutation affecting brain function.

That never made any sense to me (and plenty of others), because physically Homo sapiens is around 200,000 years old, and there also wasn't any genetic evidence of a major mutation around 70,000. The evidence of symbolic activity after that date also included sites apparently inhabited by Neanderthals, an even older species. So I always thought that older evidence of symbolic activity would turn up eventually. And it has. Shell beads from other African sites have been dated to between 80,000 and 120,000 years ago, although some of them were less convincing than these. There have also been claims of simple art (scratched starburst designs) more than 100,000 years old. So it looks like symbolic activity, and likely language, go back at least to the origins of Homo sapiens.