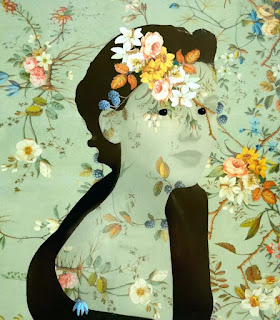 Cindy Craig, Sometimes I Feel Invisible, 2022, for sale on Artsy
It was reading an article at the NY Times that got me started on this. It was about how Asian Americans feel invisible, unnoticed in a country where other people command all the attention:

In her memoir, Ms. Miller writes about how growing up Asian-American had made her feel “used to being unseen, to never being fully known. It did not feel possible that I could be the protagonist.”

From there I ended up at a The New Republic article about the debate over wokism which included this about Andrew Yang, the author of The Souls of Yellow Folk:

Yang speaks from the tormented perspective of one of the overlooked. Despite outward signs of assimilation and success, Asian Americans, he writes in “Paper Tigers,” are considered “a mass of stifled, repressed, abused, conformist quasi-robots who simply do not matter, socially or culturally.” The men, in particular, are sexually undesirable, powerless, and emotionally crippled by a servile subculture that is obsessed with academic success, with math and violin lessons—with a soulless, by-the-numbers kind of American dream. The proof lies in both anecdote and data: the painfully maladroit men who confide in Yang that they cannot live comfortably in their own skin, the way whites do; the ranks of exquisitely credentialed Asian Americans who fill the middle tiers of this country’s most profitable companies, but rarely make it to the top.

This is of course almost a parody of an old complaint from Black Americans. Ralph Ellison's The Invisible Man (1952) begins:

I am an invisible man. No, I am not a spook like those who haunted Edgar Allan Poe; nor am I one of your Hollywood-movie ectoplasms. I am a man of substance, of flesh and bone, fiber and liquids—and I might even be said to possess a mind. I am invisible, understand, simply because people refuse to see me.

Ta-nehisi Coates once wrote that even Barack Obama was invisible to his opponents, who simply could not see him.
Or this from the NY Times, about Native Americans failing in school:

But it's not just minorities! Do a quick search for "I feel invisible" and half the links that come up will be pieces by and about older women. Here's one titled Why Women Our Age are Saying 'I Feel Invisible.'  And another: Are You a Woman Over 45? Guess What? You're Invisible.
And introverts. And mixed race people.
What's really going on here is that in a huge society like ours, almost everyone feels invisible. Don't believe me? Just Google. Or go on Reddit, where there are hundres of threads that start like this one:

Lately I've been feeling down and I've just got to get this off my chest... .. . I feel invisible.

Let me elaborate. My whole life I've felt like I was that kid that was just there. The kid that sits and eats their lunch alone, the kid that goes to the school yard and just walks around, viewing what's around him. The kid in the family who was one the one they weren't expecting or didn't want, but then there they are.

The thing that irritates me about this discourse is the assumption that some other group of people feels differently. It's just Asians who feel this way, or Blacks, or women over 45, or introverts. Other people are doing fine. It's an imperialism of suffering, as people try to claim more and more grim ground for themselves while excluding others. You don't suffer like I do!
But that's just wrong. Look around: there are prayers for when you feel invisible, support groups for people who feel invisible, a shelf of books about feeling invisible. Name any subset of Americans with more than a million members and I will be you that in five minutes I can find at least two plaints that they feel invisible. It is a huge human problem.
Speaking for myself, I spent my whole youth feeling uncomfortable in my own skin – a total failure of a white person, I guess. Watching movies full of white people has never made me feel seen. I do not see George Clooney and think, "There is someone like me." I see a glamorous celebrity who lights up the screen just by looking at the camera, and I am none of that. Why do you suppose anyone puts up with all the hassles of being a celebrity? Because in our world it is only way to really feel seen, and to many people that is worth a vast amount of trouble.
I'm not trying to say that everyone is the same on this metric. People get differing amounts of attention, and some feel a lot more seen than others. This may even correlate with race, although I would bet the correlation is a weak one.
This game of believing that you only suffer because of something about you or your group is annoying, misleading, uncharitable, uncompassionate, and bad for all of us, and we should stop.
Posted by John at 7:14 PM

I'm potentially an outlier, in that I actively don't WANT attention from society at large, and would far rather have a small handful of close friends and loved ones who understand me well (and whom I also understand well), rather than the superficial parasociality of "celebrity".

But I'm also someone who is pretty firmly "counter-culture" in a great many ways - and from that viewpoint, I'd argue that the real issue is that our mainstream culture conditions people to WANT to be "seen" in ways that (to my mind) are neither healthy nor realistic.

I firmly believe that there is a very intentional effort by large sectors of our society to make the average citizen insecure and unhappy - for the simple, cynical reason that miserable people make for better customers, and thus create more profits for companies. Happy, healthy, well-adjusted individuals simply aren't as likely to want or buy things they don't actually need. They don't have as many aching holes in themselves to attempt to fill or sooth with commercial products that promise them relief.

I understand your frustration with people feeling like they are somehow uniquely victims, but you must realize that people are intentionally taught to feel that way by a predatory system that directly profits off promoting such feelings.