Race, gender and class of course intersect in ways that make things especially bad for some people. But not necessarily the ones you would expect:

What the data shows is that black women born into wealthy or middle class households are just as likely as white women to end up in the same class as their parents. But black men born into such families are more likely than any other group to fall in status. 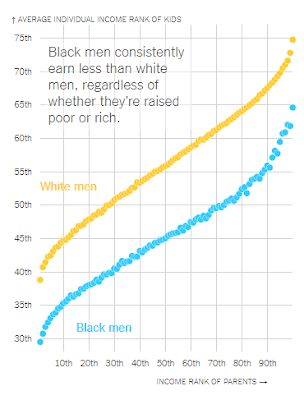 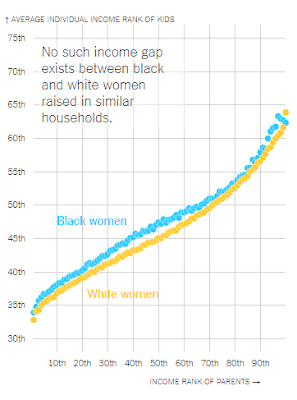 Compare the curves for men and women; pretty stark difference. The data is based on national surveys and is supposed to include all Americans now in their late 30s. I think we can all imagine why this might be, although the study doesn't provide any explanations.

At any rate this study complicates several possible explanations for black-white economic differences in the US. If racism is the cause, it seems to be a racism focused mainly on men. On the other hand the data seems hard to reconcile with any difference in innate intelligence or other inherited skills, since whatever holds back black men does not apply to their sisters.

The study also provides a nice way to put a number on the advantage of being white and male: the average income for a white man born into a median family, is 55% of the median income, while for black men and all women it is 45% of the median.

You can also play with this to get an idea of the inheritability of income. The average outcome for all Americans falls between 30% and 65% of the median, which is not really so bad; those born into very poor families do on average move up, and those born into upper middle class families on average move down. What is different in our age is the return of the super rich, the 1/10th of one percent who don't even fit on this curve.
Posted by John at 8:49 AM