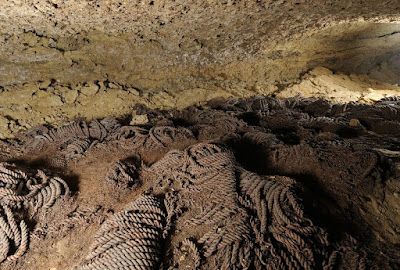 Cache of 4,000-year-old rope in an Egyptian cave at a place on the Red Sea coast known as Wadi Gawasis, uncovered by archaeologists in 2004.


Everybody knows about fire and the wheel, but string is one of the most powerful tools and really the most overlooked. It’s relatively invisible until you start looking for it. Then you see it everywhere.

The oldest known rope in on the order of 10,000 years old, but hints like impressions in clay and the existence of beads meant to be strung suggest that twisted string goes back 50,000 years or more.

The basic knots are also ancient, at least 5,000 years old and perhaps much older.
Posted by John at 1:40 PM