The Treasure of Nahal Mishmar 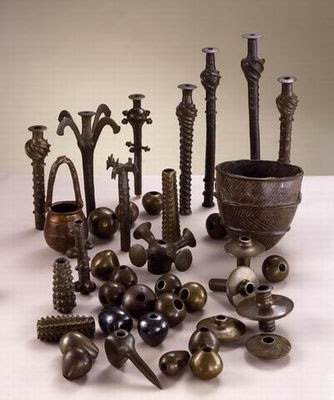 In 1961, an extraordinary treasure was found in a cave near the Dead Sea known as Nahal Mishmar.


Hidden in a natural crevice and wrapped in a straw mat, the hoard contained 442 different objects: 429 of copper, six of hematite, one of stone, five of hippopotamus ivory, and one of elephant ivory. Many of the copper objects in the hoard were made using the lost-wax process, the earliest known use of this complex technique. For tools, nearly pure copper of the kind found at the mines at Timna in the Sinai Peninsula was used. However, the more elaborate objects were made with a copper containing a high percentage of arsenic (4–12%), which is harder than pure copper and more easily cast.Radiocarbon dating showed that they were from the Chalcolithic or Copper Age, between 4000 and 3500 BC.

The difficulty with interpreting these objects is that the collection is absolutely unique, and some of these objects are like nothing ever seen anywhere else. The round knobs are usually said to be mace heads, but there is no evidence that any of them was ever used in combat. The remaining objects are even more obscure. 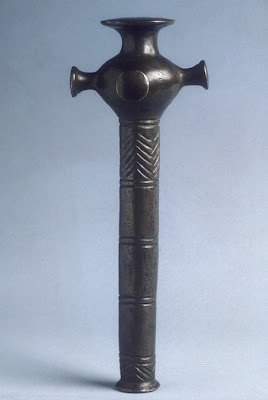 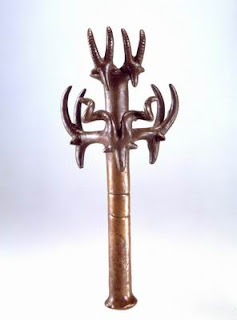 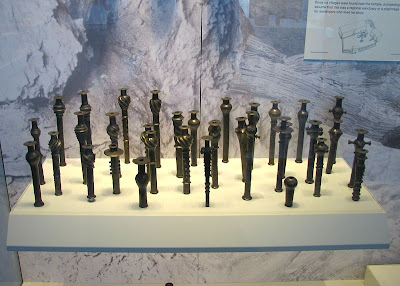 The most common objects were 118 of these "standards" or "scepters." What they really were is anybody's guess. Some had traces of reeds or wood in the holes, suggesting that they were attached to poles. 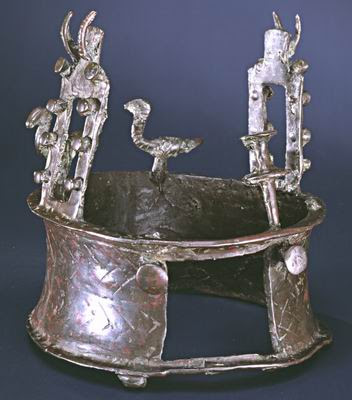 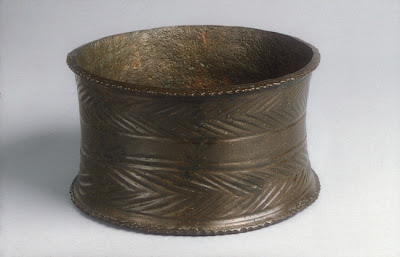 There are ten of these cylindrical objects in the hoard. They are conventionally known as "crowns," but more archaeologists think they were stands for vessels with pointed bottoms. 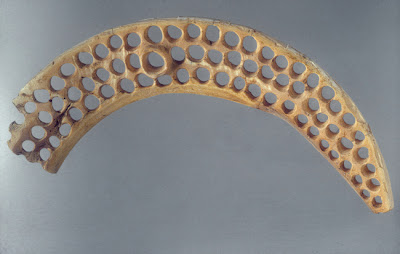 What is one to make of this hippopotamus ivory object, essentially a slice from a hippo's tooth drilled with as many holes as would fit? 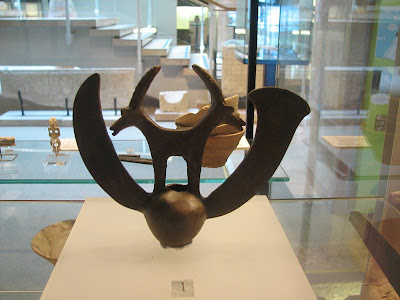 This object seems to be proof that the pushmi-pullyu really existed in the Chalcolithic era. 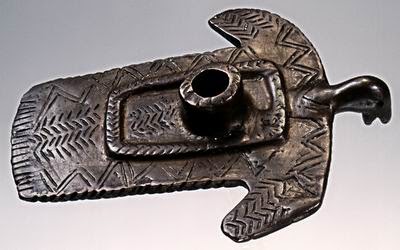 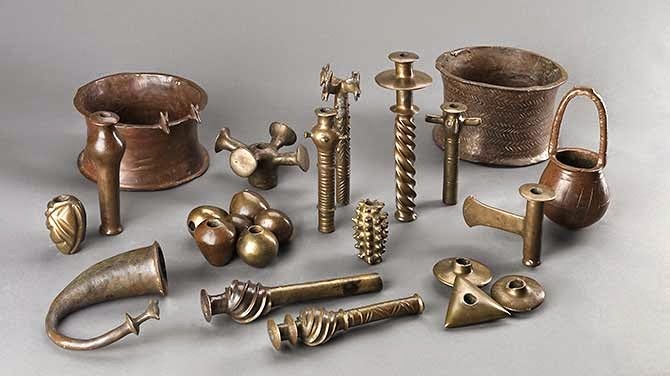 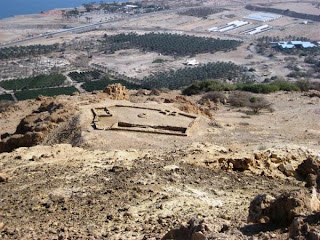 The closest major site of this period is a shrine at the oasis of Ein Gedi, 7 miles (12 km) away, and the objects may have been hidden when the shrine was under some kind of threat. The cave is in a steep ravine, accessible only with ropes and ladders, so it would have made a good hiding place. So good that this amazing collection of objects remained hidden for 5500 years.
Posted by John at 9:09 PM

Amazing and so unique. The reference to the animal life is expected. The desert antelope and birds of the air, perhaps geese, swans? I propose those specifically because they are pair-bonded, which would be required in catastrophic environmental times to raise young and survive.
But the shapes of the man-made objects don't lead to anything we can define in a historic way. One suspects that civilization has been recreated many times each time site specific.
In particular the square open shapes with knobs are particularly baffling. One suspects to understand this a trip back in time to would be needed. But as the people we know as the Celts claimed, and as history dna disclosures indicate, one man can direct a time line.