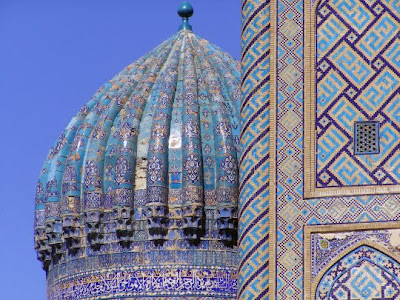 I have been reading a so-so biography of Tamerlane -- Timur or Temur to his friends, otherwise Sword of Islam, Conqueror of the World, Lord of the Fortunate Conjunction, etc.; to his enemies, Timur the Lame, the Scourge of God, Slaughterer of the Faithful, and so on. Timur (1336-1405) was a minor Turkic nobleman born to a nomadic family amidst the declining vestiges of Genghis Khan's Asia-spanning empire. He rose to power among the tribes of the central steppes and then conquered a great empire of his own that included most of central Asia, Afghanistan, Pakistan, Iran, Iraq, and the Caucasus. His main capital was Samarkand, and it is because of Tamerlane, his sons, and all the intellectuals and craftsmen they brought into their service that it became one of the world's most beautiful cities. 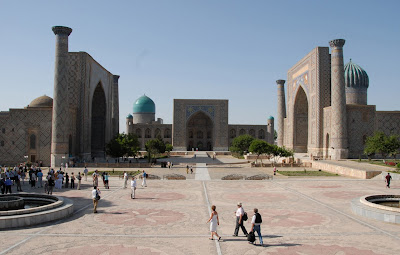 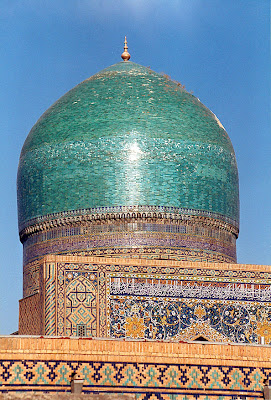 I have been thinking, as I read, about the mix of beauty and terror that these buildings represent. Temur was a warrior of great brutality. He regularly slaughtered the entire populations of cities that opposed him, building pyramids with the severed heads of his victims. After the sack of Isfahan in 1388, the Persian historian Hafiz-i-Abru counted 28 such piles of heads around the city, representing 50,000 corpses. He also regularly staged spectacles of cruelty to impress his foes. At Isfahan he had his mounted soldiers trample a thousand children to death. At Isfizar he had two thousand captives entombed, alive, in a huge mound made of brick and mortar. He inflicted terrible tortures as a matter of routine. 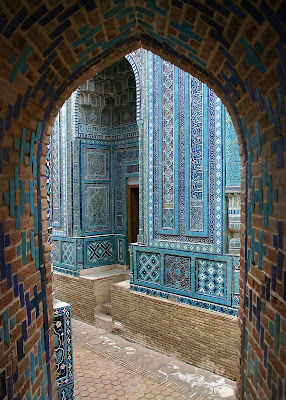 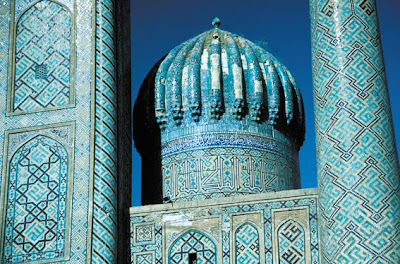 And yet, look at these buildings. "Samarkand, the most beautiful face the earth has ever turned toward the sun," said Amin Maalouf. They astonish me with their loveliness, and yet they are only a remnant of what once was, less famous in Timur's time than the many now vanished gardens, fountains and pleasure palaces. Samarkand was only one of a dozen cities Timur beautified, and architecture only one of his arenas of patronage. He also sponsored numerous poets, painters, and philosophers. 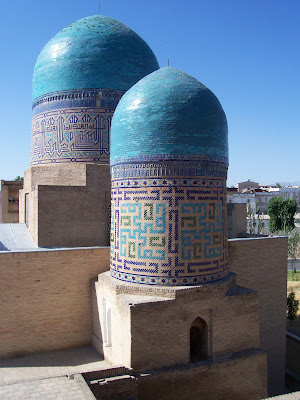 He had a particular reverence for Muslim holy men. He supported dozens of saints, and when they died built lavish tombs for them. 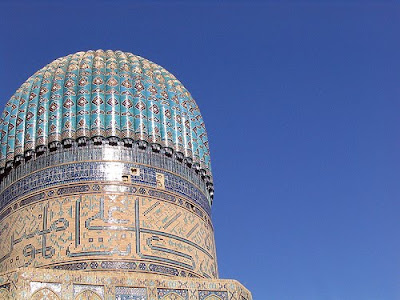 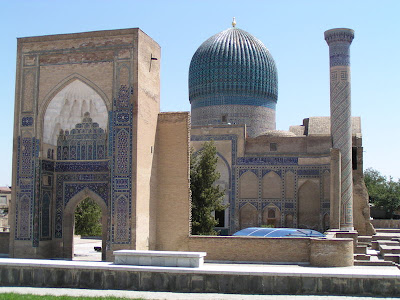 The moralists among us like to think that the various kinds of human goodness go together, and that they might be somehow separated from the bad or made to war against evil. All the evidence says that this is not so. On the contrary we see that every person is a mix of good and bad thoroughly interwoven. Indeed we often see that the highest expressions of some virtues are in people who also most highly express certain vices. 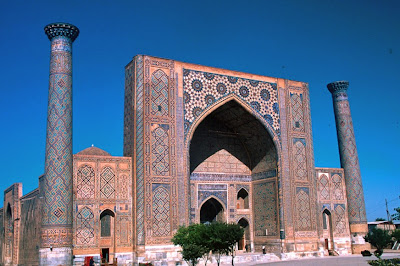 Timur was a brave as any person who ever lived, as decisive, as determined. He was intelligent, lavish with his subordinates, a competent ruler who punished corrupt governors and worked to bring peace and justice throughout his empire. He had a very great love of beauty and exquisite taste, leaving an artistic legacy that surpasses almost any other. And he was a monster.
Posted by John at 7:29 AM

Very interesting. What are the author and title of the biography you're reading?

Justin Marozzi, Tamerlane: Sword of Islam, Conqueror of the World. 2004