The Anonymous Library Fan and His (or Her) Paper Sculptures 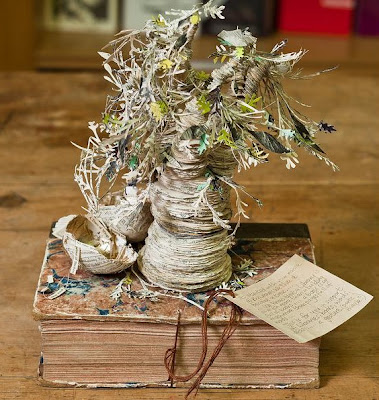 Over the past year, several libraries and book fairs around Edinburgh have received paper sculptures from an anonymous fan of libraries. The first was the tree above, deposited at the Scottish Poetry Library with this message:

It started with your name @byleaveswelive and became a tree.…
... We know that a library is so much more than a building full of books… a book is so much more than pages full of words.…
This is for you in support of libraries, books, words, ideas….. a gesture (poetic maybe?) 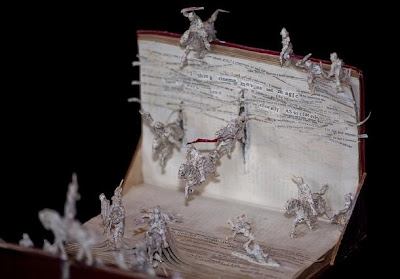 News flashed around Twitter -- @byleaveswelive is the library's Twitter account -- and this became the talk of the Edinburgh literary scene. The news coverage made much of the "mystery" angle, but I don't believe for a minute that the creator's identity is really a secret. There just aren't that many people with this kind of talent.

As of August, when the post I linked to was last updated, these gifts were still appearing, at least seven so far. If this turns out to be a publicity stunt, it has certainly been a cool one. And if these really are just gifts given from the love of libraries and books, bravo to the creator.
Posted by John at 6:17 PM