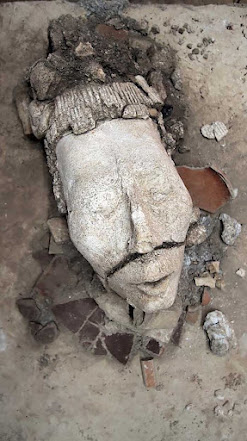 Plaster image of the Maize God, recently uncovered at Palenque

Interesting Washington Post article about the debate over slavery's legacy in Benin. Some in the country have acknowledged the role of their ancestors in the slave trade; in 1999 the president made a public apology on his knees in a Baltimore church. In a recent presidential debate, one candidate denounced the other as a descendant of slave traders. So the issue is very much alive in some parts of Africa. This came up because a movie is in the works about the Amazons of Dahomey, an actual and very interesting force of female warriors that gets overhyped in dumb internet articles. But 18th-century Dahomey was one of the main slave raiding states, so I wonder if there will be protests against the movie in either Africa or the west.

Huge, zoomable versions of the Webb Space Telescope's first images, along with other scientific results. Very impressive but they aren't enough better than the Hubble's to have the same kind of cultural impact.

Plans for the Webb Space Telescope's first year of operation: exoplanets, the formation of galaxies, and the re-ionization of space.

In Georgia, a grand jury is investigating whether Trump and his people violated Georgia election law; good short article at Vox.

Recently released data suggests that the Chinese government has been overcounting their population, especially babies; according to this demographer, births peaked in 1991 and the population is already declining.

The decline of history as a major. Possible explanations: not careerist enough, not ideological enough, too ideological, not a good signal that you are a smart, serious person, and "Americans don't like to read any more."

Roughly 23% of Americans took a prescription medication for mental health over the past year. Depressing NY Times story with more detiails here.

Five-minute Met video on recreating the color of an ancient statue. Traces of pigment on the head matched pigments used in the Fayum mummy portraits, so those were used as guides.

It interests me that some of the very conservative ex-military guys I've been following on Twitter are really cranky about the militariziation of the police, which they call "larping."  It occurs to me that in the elite parts of the US military, like the special forces, they devote a lot of attention to not shooting the wrong person.

Irish horror films: "Irish folklore is particularly dark and lends itself to horror. Not a lot of happy endings – a lot of people being dragged to their doom."

Ray Epps was a Trump-supporting election denier who went to Washington on January 6. But he then became the focus of a conspiracy theory that made him an FBI instigator who urged others to enter the Capitol in a plot to undermine the right, and his life was pretty much ruined. (NY Times)

What if China invades Taiwan? The outcome of a wargame staged at CNAS, 12-page pdf. 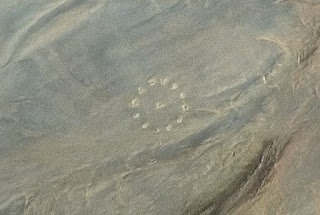 Someone posted Google Earth images to Reddit showing a bunch of circles like this one in southern Algeria, in the middle of the Sahara. Some people at Vox decided to figure out what they were, and the result is this fascinating 27-minute video.

A US Army manual from 2016 described Russian forward ammunition dumps as "the most unsafe places in any warzone" and advised attacking them early and often.

Extraordinary short video showing another Ukrainian missile strike on a Russian ammunition dump, this one in Nova Kakhovka near Kherson. More here.

Briefing from a "senior US defense official" on artillery support to Ukraine; says that Ukraine is firing about 3,000 155mm shells a day.

Detailed map showing how Russian forces are arrayed along the front between Kharkiv and Bakhmut.

Some evidence that Ukrainian morale is holding up.

Putin is using a crackdown on corruption to clean house; when everyone is corrupt, the state can always arrest anyone they want to on corruption charges. Reminds some people of Stalin.

Thread on Ukrainian tank tactics, based on an interview with an armored officer.

Short video showing a clear view of a Ukrainian missile striking an oil platform off Crimea.

Kazakhstan Thumbs its Nose at Putin.

Austrian military briefing on the battle of Donbas, past (through July 3) and future, in English.

Speech by the commander of British Air and Space forces; the part about Ukraine is early on, goes on from there to talk about future stuff.

Americans love pills, and doctors love prescribing them. Not sure what the problem is? must be anxiety, here's a pill.
I went to a doctor because I had occasional dizziness and within five minutes he was writing a prescription for Effexor. I actually looked into what Effexor was, but many people don't.