Villa Aurora is Up for Sale, One Caravaggio Included 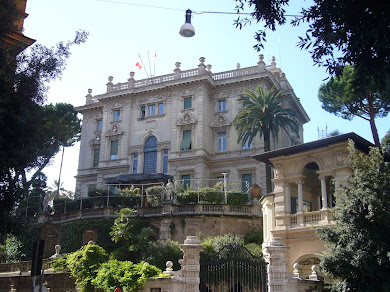 The Villa Aurora in Rome is up for sale, asking price $547 million. This intrigued me, because I can't remember ever hearing of the Villa Aurora before, besides which, how many people with $547 million to spare want a house in Rome? 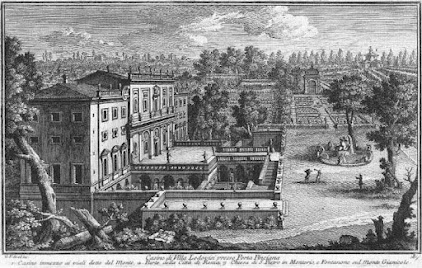 What is now known as the Villa Aurora was once a small part of an estate established in the 16th century by Cardinal Francesco Maria Del Monte (1549–1627). The Cardinal was a diplomat, intellectual, connoisseur, and collector, patron of (among others) Galileo Galilei and Caravaggio. The surviving house was once the "casino" of this great estate, that is, a sort of lodge where gatherings and parties were held. The point was that moving away from the main house allowed greater license in behavior, even though events there were not really any more private; sort of like putting on a mask that did not really conceal your identity. 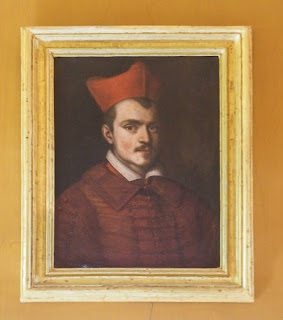 In 1631 the property was sold to Ludovico Ludovisi, newphew of Pope Gregory XV. That's him above. It has remained in the Ludovisi family ever since. They later married into the Bomcompagni family and acquired the title Princes of Piombino, so you often see those names in association with the house. In recent years tours of the property were led by the American-born wife of the 12th prince, Rita Boncompagni-Ludovisi. 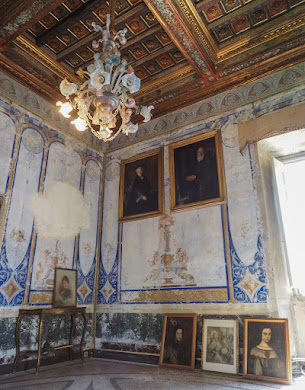 In the eighteenth and nineteenth centuries the estate was regularly opened to the public, and the gardens were much admired by aesthetes like Stendhal and Henry James. But in the 1880s the Ludovisi clan fell on hard times and had to sell off both their main house and most of their property, which became a populous neighborhood. They were forced to move into the casino and renovate it into a residence. And now they have run into more trouble over the estate of that 12th prince, who died in 2018, and it seems the family will have to sell everything. 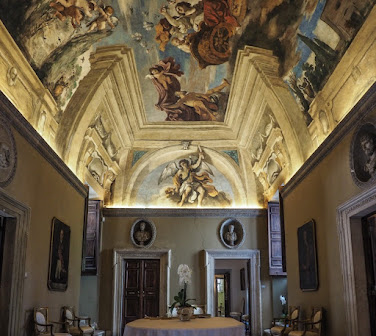 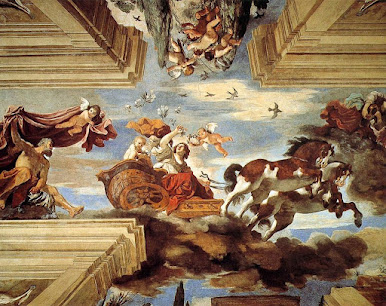 The great draw of the house, and the reason for its crazy asking price, is the art. Its name come from a painting on the ceiling of the main hall by Guercino (above) showing Aurora bringing in the dawn. 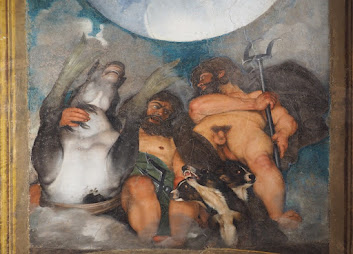 But the really famous piece is by Caravaggio, Jupiter, Neptune, and Pluto, the only ceiling he is known to have done. This was unknown for centuries because somebody painted over it, perhaps because the divine testicles were too disturbing. It was rediscovered in 1968 and restored to this state. I have not found any sign of controversy over either the discovery or the restoration, so I suppose it is respected. 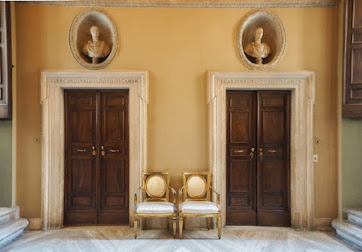 So that's what you could get for $547 million: a house where various Baroque grandees partied and debated Galileo's discoveries, a remarkable array of 16th-century art, and a large, unique painting by one of the most famous artists of all. 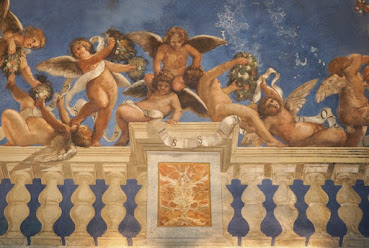 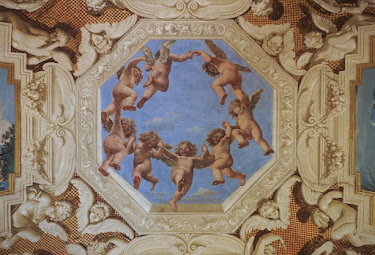 I'm have no idea who would find it worth the price, but it beats buying NFTs.
Posted by John at 10:16 AM

I'm have no idea who would find it worth the price, but it beats buying NFTs

Imagine paying multiple millions for a worthless "certificate of ownership" which does not confer any actual legal ownership of anything, and which has the sole function of containing a web address that points to a worthless .jpeg file hosted on a server that could be taken down at literally any moment without your knowledge or consent.