Today's Place to Daydream about: Anglesey 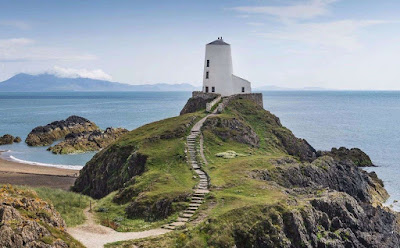 Anglesey is an island off the northwest coast of Wales. It is hilly and lacks the dramatic scenery of the Welsh mountains, but it has a remarkable history and pieces of that past are scattered from one shore to the other. The name Anglesey is Viking; in Welsh it is called Mona and has been since ancient times. 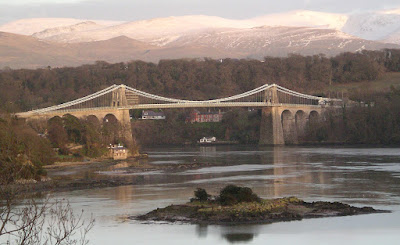 Most people reach the island across a bridge from the mainland, one of which is still the Menai Bridge, completed in 1841, when its mighty chains were powerful symbols of the new age of coal and steel. 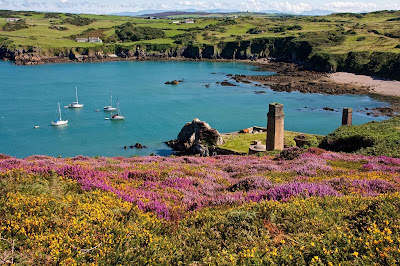 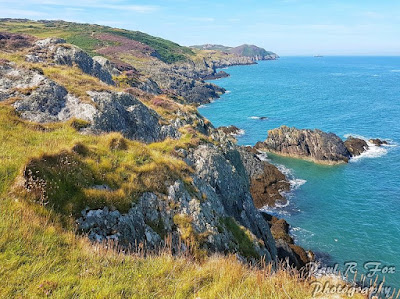 There is lovely scenery; people heap praise on the Coastal Path, which takes you past cliffs, fishing villages, lighthouses, and castles. 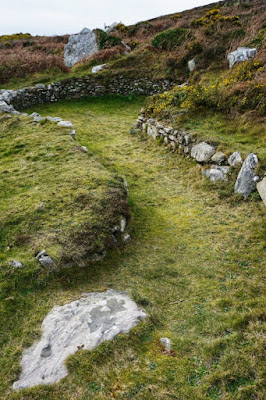 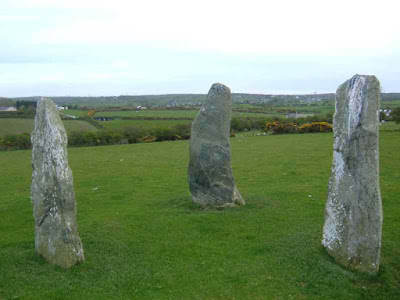 It hosts dozens of prehistoric monuments: standing stones, tombs, settlements. I found accounts today by people who spent whole days driving from one to the next to the next, trying to visit as many as possible between sunrise and sunset. (Above, hut circles at South Stack, and the three standing stones of Llanfechell.) 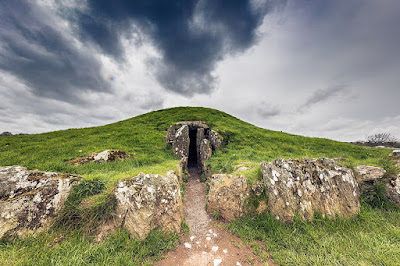 Most famous is probably Bryn Celli Ddu - Welsh for 'the Mound in the Dark Grove.' A circular henge was built here around 3000 BC, with a circle of standing stones. A thousand years later a tomb was built within the circle. 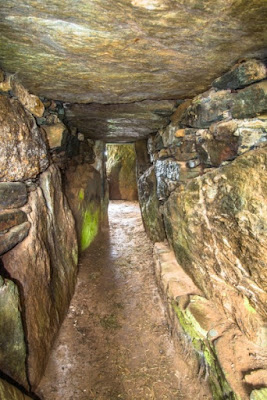 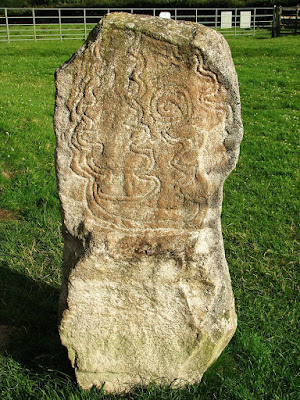 Among the discoveries was a decorated menhir, buried within the mound, a replica of which was erected outside the rear entrance. 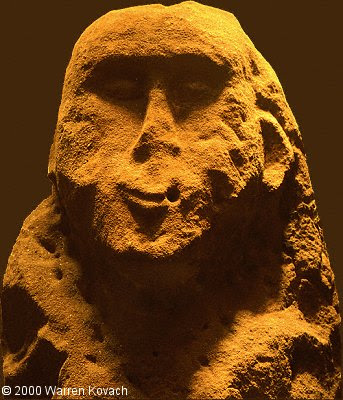 In Celtic times the island was, the Romans said, the great seat of the Druids. Tacitus tells us that in AD 60


Britain was in the hands of Suetonius Paulinus, who in military knowledge and in popular favour, which allows no one to be without a rival, vied with Corbulo, and aspired to equal the glory of the recovery of Armenia by the subjugation of Rome's enemies. He therefore prepared to attack the island of Mona which had a powerful population and was a refuge for fugitives. He built flat-bottomed vessels to cope with the shallows, and uncertain depths of the sea. Thus the infantry crossed, while the cavalry followed by fording, or, where the water was deep, swam by the side of their horses.

On the shore stood the opposing army with its dense array of armed warriors, while between the ranks dashed women, in black attire like the Furies, with hair dishevelled, waving brands. All around, the Druids, lifting up their hands to heaven, and pouring forth dreadful imprecations, scared our soldiers by the unfamiliar sight, so that, as if their limbs were paralysed, they stood motionless, and exposed to wounds. Then urged by their general's appeals and mutual encouragements not to quail before a troop of frenzied women, they bore the standards onwards, smote down all resistance, and wrapped the foe in the flames of his own brands. A force was next set over the conquered, and their groves, devoted to inhuman superstitions, were destroyed. They deemed it indeed a duty to cover their altars with the blood of captives and to consult their deities through human entrails. 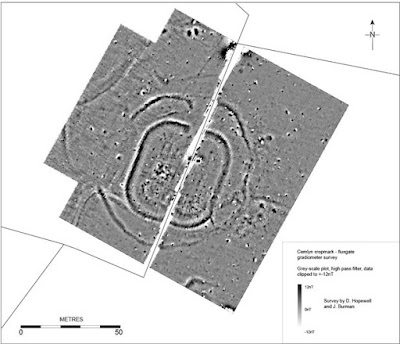 The Romans kept a military presence from 77 AD until they withdrew from Britain after AD 400, to watch over the unreliable, druidical population and to defend against Irish pirates. This image shows a small Roman fortified post recently mapped by magnetometry near Cemlyn Bay. There was a larger Roman fort at  Aberffraw, which is now hidden under the modern town. After the Romans left this was taken over by Welsh chieftains, and by 860 AD Aberffraw was the capital of the Kingdom of Gwynedd. It remained so until c.1170. Another wonderful case of barbarian kings living in crumbling ruins of Rome. 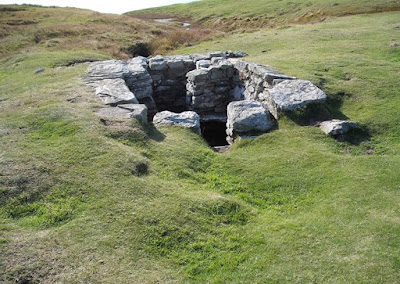 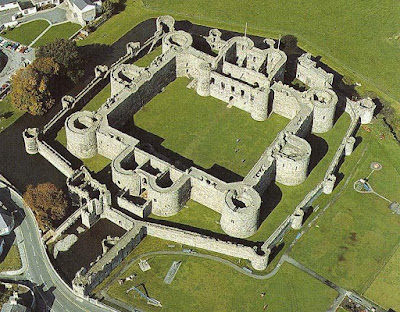 After the Romans, the next great builder in stone to come to Anglesey was Edward I of England. As part of his campaign to subdue Wales, he began (but never finished) the mighty castle of Beaumaris to watch over the island and the strait that divides it from the mainland. Construction began in 1295. 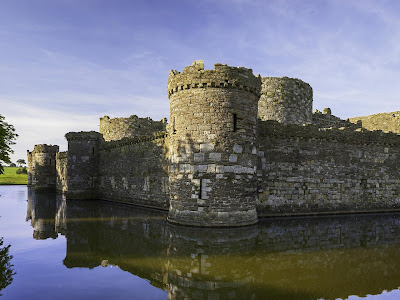 Stone for this castle was taken from the Roman walls at Aberffraw; you can see from this image of the outer wall that several different types of stone were used in the construction, much of it salvaged. 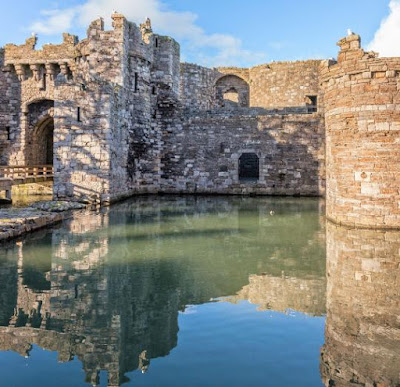 Welsh forces took the lightly manned castle during Owain Glendower's rebellion in 1403, but then the English took it back in 1405. During the English Civil War it was taken by partisans of Charles II, but they surrendered meekly when a Parliamentary army appeared. Which shows the basic problem with Edward's design: the symmetry is marvelous but the castle is so big that that it took a huge force to properly defend it, which was very expensive to maintain in this remote spot, so nobody ever did. 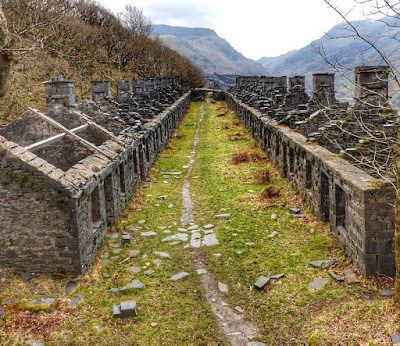 In the eighteenth century the people of Anglesey joined the rest of Wales as foot soldiers in the industrial revolution. These are the barracks of the men who worked the Dinorwic slate quarry. 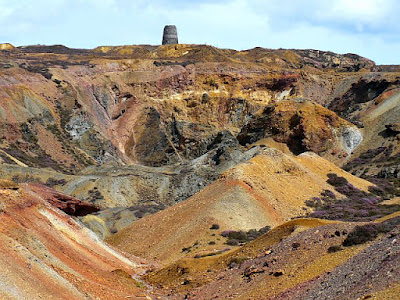 If you're in the mood for a completely different sort of historical site you could visit Parys Mountain, once the largest copper mine in the world. Copper mining began here by 1600 BC, and the modern name comes from a certain Robert Parys who received the land as payment for service to the Crown in 1406. The ore here was not of high quality but it was consistent and present in huge amounts. Industrial mining got under way around 1770, over the following 150 years over 3.5 million tons of ore was raised, mostly by hand. 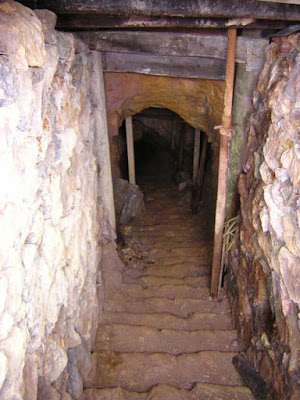 It was during the course of modern open pit mining that workers stumbled across ancient tunnels, the charcoal from one of which gives us that 1600 BC date. Today there is an association of people who explore the remaining tunnels, which mostly date to the 15th to 18th centuries. 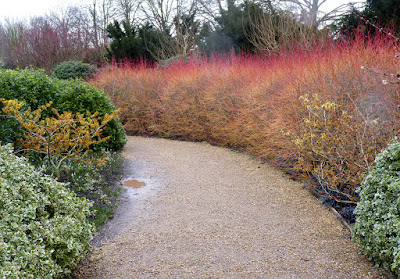 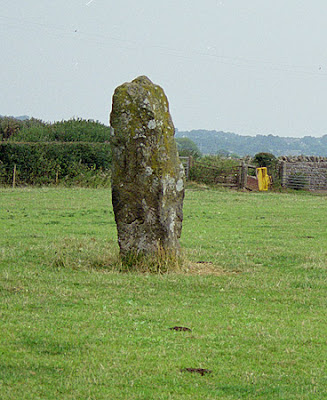 And that's just the beginning of what the island has to offer. 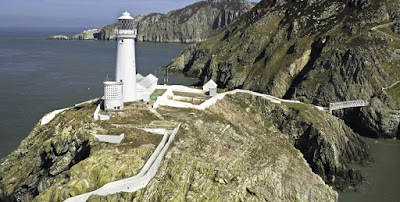 I enjoy the "Dream Bout" spots. Thanks.