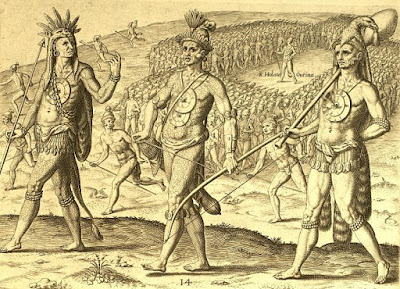 What does archaeology tell us about the past?

It's a question I ask myself all the time. Often when digging up artifacts of indeterminate date from soils of indeterminate origin I feel like the answer is, "not much." People were here, sure; they made pots or stone tools; they built fires and cooked things. What else?

My nagging sense of how little we sometimes learn from archaeology is what drew me to a 2010 paper in American Antiquity by George Milner and George Chaplin. They push the archaeological data to its limit in an attempt to answer an important question about the past, and they may have discovered something of value.

There is a long-running, sometimes bitter debate about how many people lived in the Americas before Europeans arrived. The bitterness comes from a sense that the low count faction is somehow minimizing European crimes, the high count faction trying to play them up, hence everybody is playing politics in one way or another.

How would you count anyway? One way is to start from those Native polities that were encountered by Europeans when they were still strong and healthy -- the Aztecs, for example, or the Timucuans of Florida who welcomed De Soto's men. You start from the explorers' or conquerors' population counts, look at how much the population of those areas fell by 1800, and then extrapolate to areas about which you have no data. Problems with this method include knowing how far to trust population estimates made by explorers and a sort of sampling error, in that Europeans were drawn to the most populous and dynamic Native communities for trade or conquest.

How might one go about estimating the population of areas that no ethnographically-minded outsiders visited until after their populations had been decimated by disease? Well, how about archaeology? 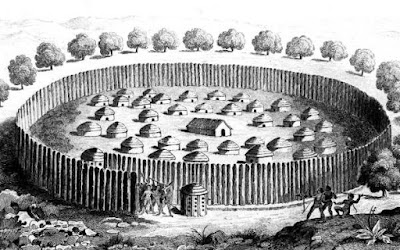 Alas, archaeology is a bad way to estimate populations; all you can really do is excavate a village and then look at historical records and see how many people explorers thought lived in similar communities, which means you are back to worrying about the accuracy of those estimates anyway.

But maybe archaeology can make a contribution here. Because to archaeologists one striking thing about North America circa 1500 AD is how many vast areas had, so far as we can tell, no inhabitants at all. The record indicates that population was quite dense in certain areas -- for example, the Mohawk Valley of New York, around the Chesapeake Bay, in the southern Appalachians, on Florida's Gulf Coast -- while other areas that look at least as good for settlement to our eyes were empty. One of these is what archaeologist have taken to calling the "Empty Quarter" around the confluence of the Ohio and Mississippi Rivers, a place that a few hundred years earlier had been home to Cahokia and other major towns. 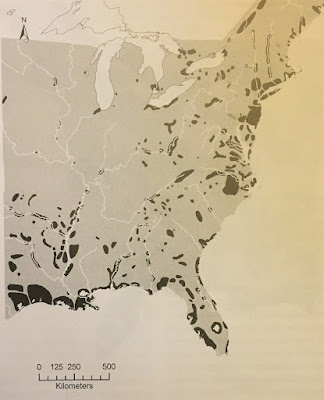 When Milner and Chaplin plotted the areas in eastern North America where archaeology indicates significant Native settlement in the early 1500s, they got the map above. The size of the blobs is not very important, because by and large the bigger the blob, the lower the population density. But anyway you can see that, based on archaeological data, vast stretches of North America were unsettled. This doesn't  mean that Native Americans didn't use these areas; they did, for hunting and the like. They just didn't build villages or plant corn there.

If you take those population estimates I mentioned before and apply them to this data set, taking account of all the area where it seems nobody lived, you get a radically smaller estimate of Native populations. Of course you have to consider that some villages were probably missed or mis-dated or what have you, but anyway this is the data we have.

Milner and Chaplin produce a range of estimates from their data, but their best figure for the population of the whole of eastern North America is between 800,000 and 1.6 million. This matches quite well with the lowest estimate anybody ever cites, Ubelaker's figure of 1 million, which was reached using a completely different method. Other estimates for the population of this area go as high as 5 to 8 million, so archaeology points to a figure on the low side of historical estimates.

As I said, I like this because it takes the archaeological data seriously: this is what we have, so what does it tell us?
Posted by John at 10:09 AM

I'm not sure this helps very much, though, if we can't also somehow measure the portion of the population that was permanently itinerant.

I think one comparison we have to make is to the Steppes of Central Asia - just because there weren't a lot of permanent settlements doesn't mean there weren't substantial populations of people.

For example, if we relied purely on maps of permanent settlements known from archaeology to estimate the population of the Mongol Empire, it'd be very hard to reconcile that data with what we know of actual history.

When a traditionally itinerant group of peoples invades a bunch of their sedentary neighbors to establish the largest contiguous empire in history, looking solely at the places with permanent settlements is going to skew data toward the invaded peoples, rather than the invaders themselves. The Mongols themselves weren't the majority population in their empire, because they conquered so many other people, but their population also wasn't as small as you'd be led to believe from only looking at permanent settlements known via archaeology. Their were a minority, but not a tiny minority.