The Margravial Opera House in Bayreuth 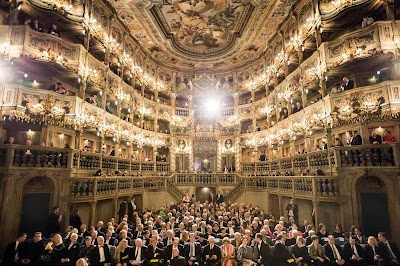 Bayreuth's 1748 opera house has just re-opened after a six-year, $36 million renovation; the Times has an appreciation and many more pictures. 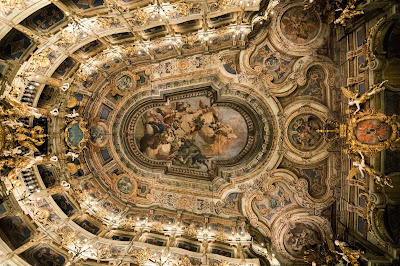 The opera house was the project of Wilhelmine, Margravine of Brandenburg-Bayreuth, daughter of King Frederick William I of Prussia and sister of Frederick the Great.


An ambitious polymath who composed music, wrote verse and corresponded with Voltaire, she built Bayreuth’s intimate yet elaborate Margravial Opera House, one of the most outstanding surviving examples of Baroque theater architecture in Europe. 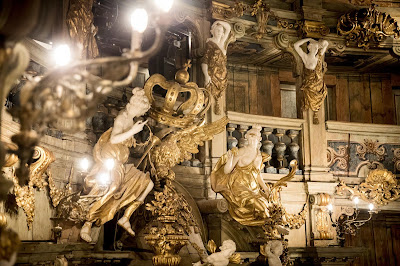 The architect was Joseph Saint-Pierre, and the interiors were designed by Giuseppe Galli Bibiena and his son Carlo. Few of these Baroque theaters remain, partly because they are so expensive to maintain and partly because they are so small. This was a theater for the aristocratic elite, of whom there just weren't very many, so seating for 450 was a great plenty. Hard for an opera company to make money on those terms today. Or even in the nineteenth century, when Richard Wagner built his own 2,000-seat Festspielhaus outside of town, where the Bayreuth festival is still held. But how wonderful that at least one of these has been restored to its original glory.
Posted by John at 8:34 AM