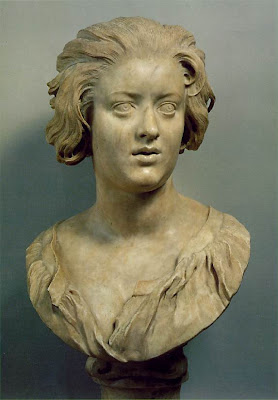 This is Bernini's portrait of his mistress Constanza, remarkably naturalistic for a work of baroque sculpture. Theirs was a stormy Italian relationship, a series of fights interrupted by passionate lovemaking. Ingrid Rowland:

Bernini was not a nice man; he paid a thug to slash the face of his mistress Costanza after catching her in bed with his brother Luigi. Before that incident, however, he had carved a portrait of Costanza, plump and tousled, looking as if she has just risen from bed; it is perfectly clear what both Bernini boys saw in her.

She recovered from the attack and went on to become a noted art dealer.
Posted by John at 8:17 AM