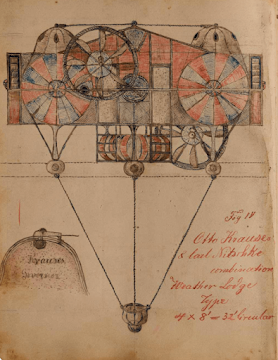 Sometime in the early 1960s – the exact date is unknown – a house in Houston, Texas caught fire. The fire marshall looked at the scorched ruins and told the family that it was all contaminated and dangerous, and nothing could be retained. So they put it all out for the trash. But along came a man named Fred Washington, a "picker" who regularly scoured trash put out on Houston's curbs for possible sale in his junk shop, Washington's Trading Post. He saw 12 notebooks full of cuttings and drawings and picked them up, but then forgot about them. 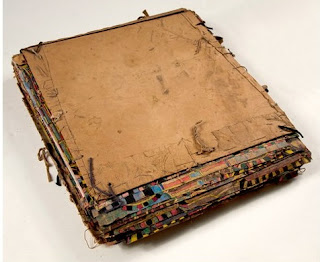 Or at any rate that was Washington's version, which he told, most likely but not certainly in 1968, to a young visitor. The visitor was an intern from the Menil Collection, an art gallery that mostly houses work collected by John and Dominique de Menil. Some of the many experts in this lore doubt Washington's story of the fire and the trash picking, and they think it is more likely that someone else brought the notebooks to the store and sold them for a pittance. But so far as I can tell it is Washington's version that holds the field. 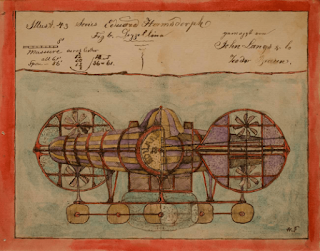 The first certain event in this whole story is 1969, when the Menil Collection hosted an exhibit of drawings and collages from those notebooks, proclaiming their creator to have been one of America's first and greatest "outsider artists." 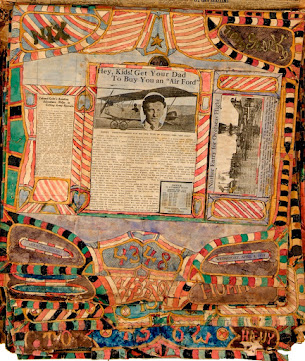 The notebooks, near as anyone can tell, were created by a German immigrant named Charles August Albert Dellschau between 1908 and 1921. Dessschau told the census takers he was born in Berlin in 1830. He is first documented in 1860, but he claimed at that time to have entered the US in 1850, and there is no particular reason to doubt the claim. After all, many Germans came to the US in the aftermath of the failed 1848 revolutions. According to his statements, in both 1850 and 1860, Dellschau lived in Texas. Dellschau died in Houston in 1923. 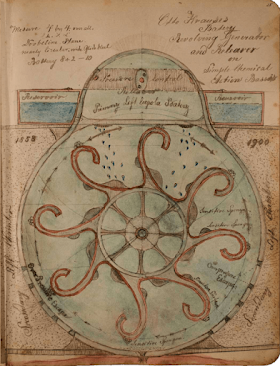 The notebooks tell the story of the Sonora Aero Club. According to the texts, in 1854 a group of men living in the Gold Rush town of Sonora, California formed a club to talk about aviation and their dreams for flight. The notebooks chronicle the club's meetings down to 1859. There is nothing particularly odd about this. The mid 1800s were a sociable age and a great era of club formation, and aviation was very much a topic of discussion. California was also short of women, which was another reason men might have joined an all-male club and spent one evening a week talking about airships. 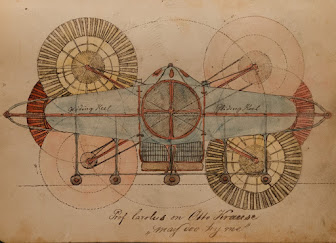 Rebecca Rosen writes (in The Atlantic):

The settlement of Sonora, about 130 miles east of San Francisco, was booming. It was there, in the saloon of one of the local boarding houses, that a group of men would get together every Friday night and talk of dreams. Well, just one dream, really: human flight.

They called themselves the Sonora Aero Club and, over time, they counted some 60 members, possibly many more. Their ranks included great characters, such as Peter Mennis, inventor of the Club's secret "Lifting Fluid," later described as "a rough Man, whit as kind a heart as to be found in verry few living beengs," despite being "adicted to strong drink" and "Flat brocke." The Aero Club's rules: Roughly once a quarter, each member had to stand before the gathered group and "thoroughly exercise their jaws" in telling how he would build an airship.

Most of the illustrations in the notebooks are supposed to show the airships that the members proposed in those talks. 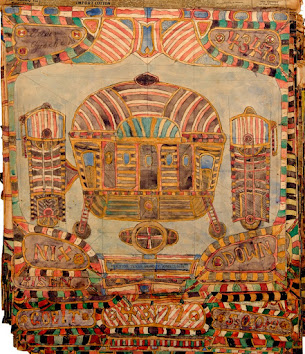 Despite considerable effort, nobody has been able to document that Dellschau ever set foot in California. But records were not great in the Gold Rush towns, and the notebooks do seem to show a detailed knowledge of Sonora and its surroundings, so the best guess is that Dellschau was probably there at some point. As for the other members of the club, they most likely existed only in Dellschau's imagination. (Although there are Dellschau aficianados who believe every word.) 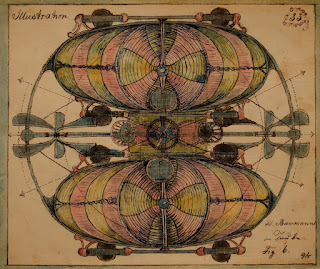 It's a great story, and the effort of tracking down all these facts has inspired two generations of Dellschau fans. As to the art, it is kind of cool, but I doubt it would have attracted so much attention without the lure of the Sonora Aero Club and the fun people have had searching for evidence of its meetings. We humans love a good mystery.

I think there's something about the art that speaks powerfully of a secretive, obsessive inner world, absolutely true to itself. It exists and proliferates on its own terms, without regard to any viewer or any consideration beyond itself. Part of that is the art's setting in its story; but there's something about the art itself too, the care and elaboration with which it is done without any clear intention that it should be viewed. Great art or not, it's amazing human psychology.

Indeed that is often the lure of "outsider art," which is by definition made by strange people for their own enjoyment.