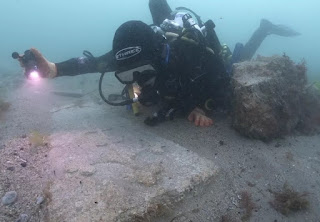 More pictures have come out of the 13th-century shipwreck recently discovered off the coast of southern England. It was carrying a cargo of goods mainly made from the famous Portland Stone of Dorset, including carved and blank grave stones like the one above. 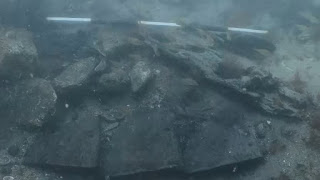 After the discoverers documented the wreck and collected a few artifacts, they buried it with sand bags. There is still quite a bit of wood remaining, which was preserved because the wreck was buried in the mud. Recent storms uncovered it, and that might lead to rapid decomposition of the wood. So for now it has been reburied, until such a time as a bored billionaire comes up with the money for a proper excavation. 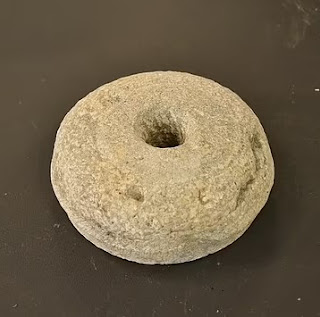 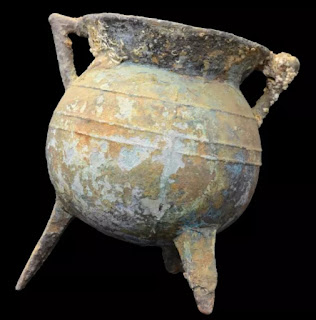 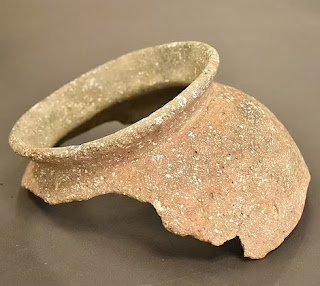 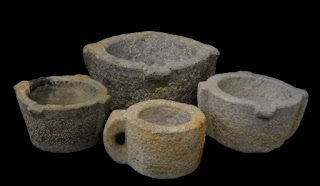 Interesting. It never occured to me that the kitchens of English aristocrats and merchants might be full of stone vessels, but these finds seem to imply that.
Posted by John at 10:52 AM

It never occured to me that the kitchens of English aristocrats and merchants might be full of stone vessels, but these finds seem to imply that.

If you go to a top tier world class restaurant, you may be served your food on delicate ceramics and your wine in a crystal glass, but the chefs in the kitchen still prepare it in industrial strength cookware.

A medieval aristocrat's kitchen would need good, rugged cooking tools - metal ones for uses that require the transference of heat, but stone for many other purposes; crocks and jars for storage, mortars and pestles / grindstones for food preparation; ceramic or stone serving dishes which don't get too hot to move by hand; etc.

And that's to say nothing of the fact that a medieval aristocrat's kitchen would have served far more people than just the lordly masters of the home - it would have required plenty of less refined vessels for use by the servants and other low status individuals in the household.