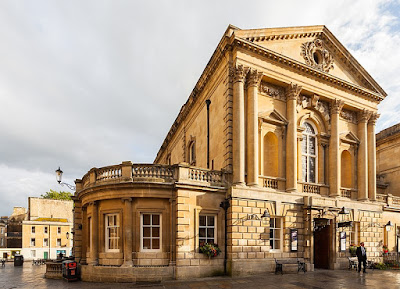 Bath is the only UNESCO World Heritage town in Britain, because of its dense accumulation of Roman, Medieval, and Georgian wonders. 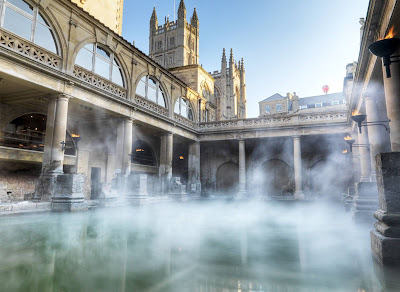 The place started as a holy spring in Celtic Britain, sacred to the goddess Sulis. The Romans took over the baths and built their own temple, equating Sulis with Minerva. Early on, perhaps in the 60s AD, the Romans stabilized the soft ground around the spring by driving dozens of oak piles into the mud; these held up the Roman bath complex and still contribute to its survival. 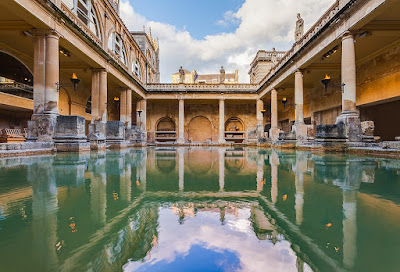 The complex evolved over the centuries, reaching its height in the 300s AD. Now the place is a historical site with an attached museum that has some great artifacts, including this bronze head of Sulis/Minerva and the temple pediment with its image of either (take your pick) Medusa or Helios. Although you can no longer bathe in the precious Roman pool, there is an adjacent modern facility where you can take the waters in a rooftop pool. 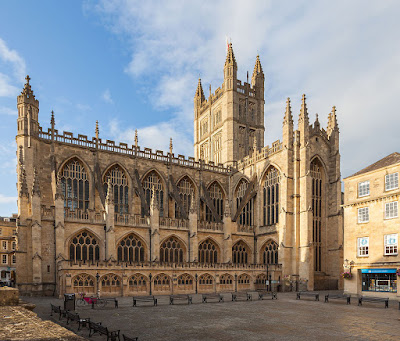 The town slid into obscurity after the Romans withdrew, and we next hear of it when a Benedictine abbey was founded there in late Anglo-Saxon times. The Normans built a huge Romanesque church on the site, but they neglected to drive enough oak piles into the soil and the thing started falling in on itself not long after it was finished in the 1260s. 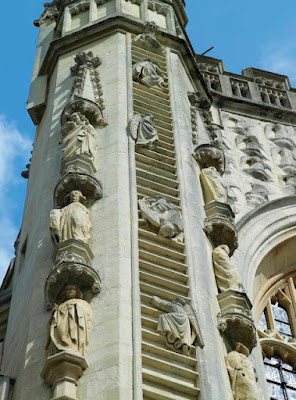 When Oliver King became bishop of Bath and Wells in 1499 the church was a ruin, so he decided to tear half of it down and rebuild the nave into a smaller church in the fashionable perpendicular Gothic style. Among his personal touches was the famous ladder with angels going up and down between heaven and earth, which he saw in a dream. 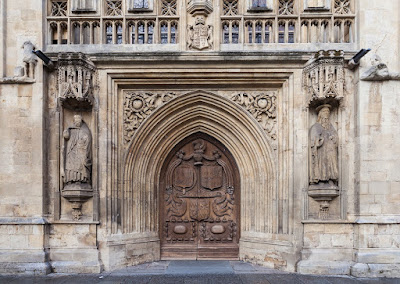 Entrance, with statues of Saints Peter and Paul, to whom the monastery was dedicated. 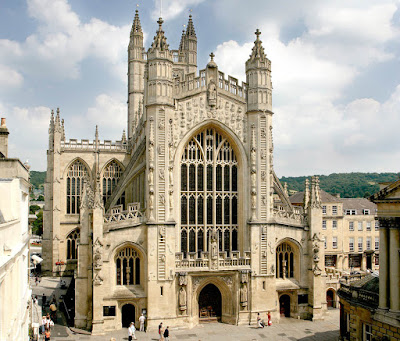 Alas Bishop King's timing was bad, and the church was still unfinished when Henry VIII dissolved the monasteries in 1537. This great building became the church for a parish that could not afford to keep it up, let alone finish it, and so it gradually decayed again. 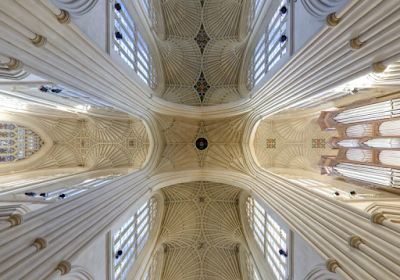 But then came the Victorians, who decided that the church must be restored, by which they meant turned into their vision of what a medieval church should have been like. Between 1864 and 1874 architect Sir George Gilbert Scott directed a "restoration" that was controversial even at the time for its lack of historicity. Scott replaced the old wooden ceiling with this spectacular fan vaulting. He also added the pinnacles – that's the little towers at the end of the flying buttresses – because, well, shouldn't it look like that? 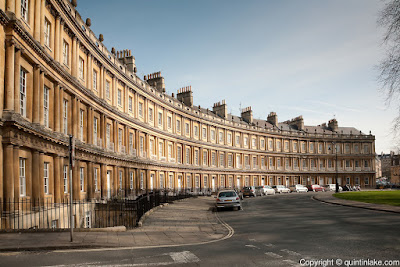 But that's jumping ahead, passing over Bath's great era of prosperity in the 18th and early 19th centuries. This was the Bath of Jane Austen and Fanny Burney and a few thousand contemporary romance novels of the "Regency" sort. Also the Sally Lunn who invented the bread. This is part of the Circus, a housing development designed by John Wood the Elder and built in the 1750s. 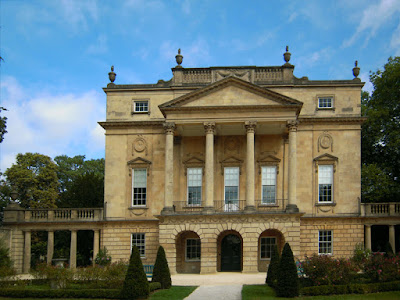 The old Holburne Hotel, now the Holburne Museum, with attached "pleasure garden." All you need to know about contemporary Bath is that the Museum holds gin tastings in the garden, featuring "an array of artisanal and flavored gins." 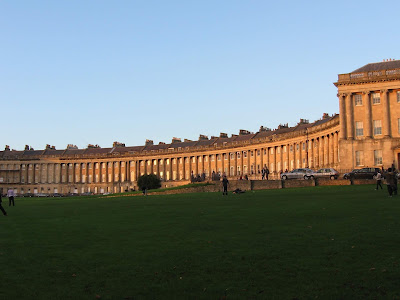 The Royal Crescent, also designed by John Wood and built between 1764 and 1776. Where Darcy would have rented a house, I suppose. 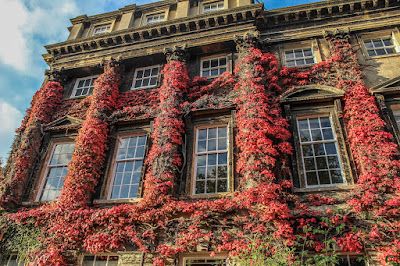 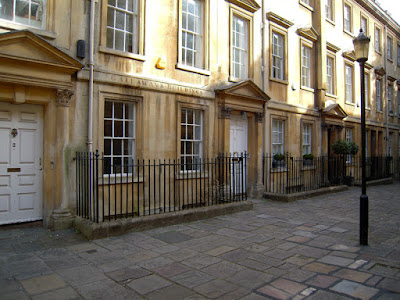 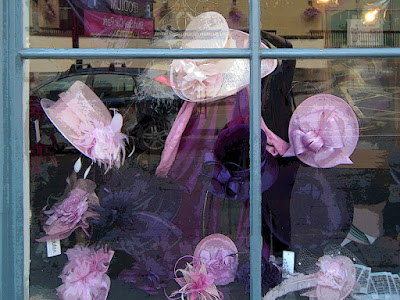 Hats. Is this what a woman wears to an outdoor gin tasting in the art museum garden? 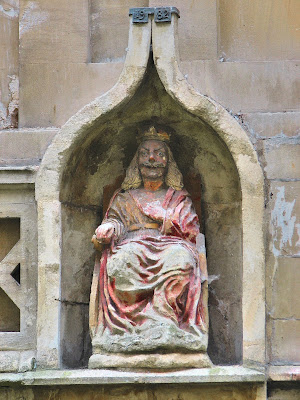 Famous and controversial statue of King Bladud, which is dated 1699 but probably does not date to then.  Bladud is a character from Geoffrey of Monmouth's twelfth century History of the Kings of Britain, one of the main sources of the myths of King Arthur. According to Geoffrey King Bladud discovered the healing spring in 836 BC; the myth grew from there and by the 18th century it included the story that Bladud's whole herd of pigs was cured of leprosy by wallowing in the warm mud by the spring. 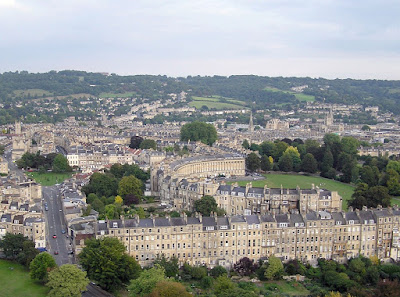 Bath might be the place in Britain where you can get closest to the Romans, besides all the other wonderful things about it, and I very much wish I were headed there this week instead of back to work. 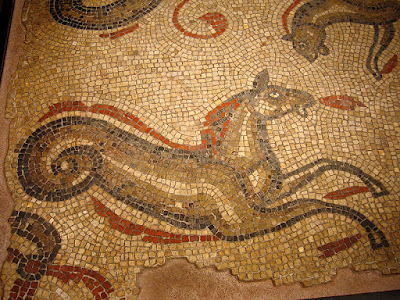 Thank you, I loved this post on one of my favourite british towns. I've been there a few years ago, and kept a memory of an urban space where I´d be happy to live. Not only architecture and history, but a whole friendly atmosphere, Wells and the Cotwolds nearby...

I also have posted myself in my (portuguese) blog, maybe you´ll have a look:

"And though you can no longer bathe in the precious Roman pool, there is an adjacent modern facility where you can take the waters in a rooftop pool."

Would it even be safe to enter the waters these days? I would assume not. Presumably there's probably a lot of lead leached out from the old Roman plumbing, but there's also the question of the quality of the aquifer that feeds the spring, the potential for infectious aquatic microbes, and the possible presence of various minerals from the earth and rocks the spring passes through.