Russians and Koreans Cooperating to Bring Back Mammoths 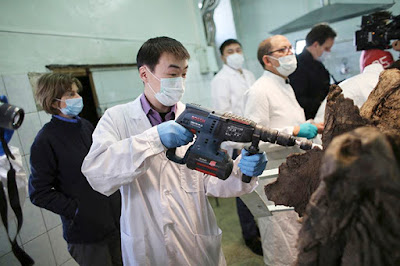 In Siberia, they are charged up about mammoths. At Pleistocene Park, a team led by Russian geophysicist Sergei Zimov is experimenting with bringing back the environment where the mammoths lived, the grasslands of the "mammoth steppe." Right now they are working with reindeer and musk ox but they would love to have actual mammoths.

At least three teams of geneticists are working on bringing those mammoths back, in South Korea, Japan, and at Harvard. Now the Russians have announced their own paleogenetics institute:


The 400 million rouble paleo-genetic scientific centre will aim to study extinct animals from living cells - and to restore such creatures as the woolly mammoth, woolly rhinoceros, cave lion and breeds of long-gone horses.

The proposal will be presented by the Northern-Eastern Federal University (NEFU) in Yakutsk, which is already deeply involved in collaborative cloning work with scientists in South Korea.

The Russians say they are actively cooperating with the Koreans I just mentioned, and expect a Korean investment in their institute.

Vladimir Putin is a big promoter of these efforts. When he visits the labs he talks them up as examples of Russian high tech and his efforts to bring in Asian investment. But I bet he is secretly thrilled about having mammoths and cave bears in Russia again. 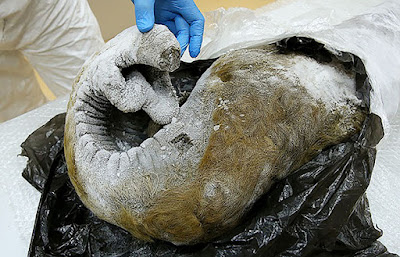 Cloning mammoths has turned out to be a harder problem than many people thought; I blogged back in 2011 about a Japanese effort that promised a cloned mammoth within five years. But our skill at molecular genetics keeps leapfrogging forward, and as I regularly tell my children I expect we will have living mammoths within their lifetimes.
Posted by John at 8:02 AM

Best case scenario, you get a novelty amusement park attraction. Is that really worth the time and energy of the world's limited amount of scientists and scientific resources?

It's bad enough that huge percentages of the planet's scientists and engineers dedicate themselves to building ever more and deadlier new ways to kill people for the militaries of the world. Do we really need to be devoting scarce resources to reviving mammoths, of all things? Particularly when the planet is poised for ecological disaster due to global warming?

Sergei Zimov wants to bring back the mammoth steppe precisely because it might reduce global warming.

But even if that weren't so, I think bringing back the animals we humans drove to extinction is a noble endeavor. The world is poorer without mammoths, just as it would be poorer without African elephants. Siberia is still a vast, mostly empty place and there is plenty of room for hundreds of mammoths, not just a few museum specimens.

Siberia is vast, but it's far from empty. There's an entire range of ecosystems already there - why are they less deserving of continuing to exist than an ecosystem that can support mammoths is of being brought back?

More importantly, I can't imagine how this could posibly reduce global warming. Quite the opposite - as far as I'm aware, it would actually worsen the problem.

Siberia is one of the biggest carbon sinks on the planet. The massive stretches of forest convert atmospheric carbon dioxide into oxygen on an incredible scale, and the extensive swamps and bogs trap and retain huge amounts of greenhouse gases. Replacing either of those biomes with steppes sounds like a recipe for disaster, in a world already poised on the brink of environmental catastrophe. Dry, treeless grasslands just aren't very good for the global climate.

As for bringing back animals we've driven to extinction, why pick mammoths? They went extinct as part of a mass extinction of megafauna, and we actually don't know to what extent Stone Age humanity contributed to their disappearance. There's no direct evidence that humanity drove them to extinction - merely conjecture, and the circumstantial fact of their being hunted. For all we know, the vast majority of mammoths died off from simple environmental loss caused by natural processes, and humans just happened to prey upon the few remaining.

But if we want to grant the benefit of the doubt and suggest humanity is responsible, plenty of other species of creatures went extinct at the same time, and of those the same argument for human interference could just as easily be made. So why only mammoths? Why not any of the others? Are we going to reconstruct the habitats and ecosystems of every single species we might have had a hand in seeing to extinction over all the millenia of our distant past? Do we even have the land area to do that?

You talk about the nobility of bringing back animals we drove extinct, but I argue that no such nobility exists. It is an absurd romanticization of the past. We don't lament the human caused extinction of smallpox, for example - no one is proposing bringing back that particular lifeform out of a sense of "nobility". Why is that, do you think?

Humans are horribly irrational when it comes to old and bygone subjects. We obsess over "The Ancient" , dreaming of romantic, imagined, mythic pasts that never were. We charm ourselves with tall tales about the "majesty" and the "nobility" of the great ancient mammoth! How we long to see them return to their "rightful place" in the universe!

And yet, you might just as well argue that we tear up all our asphalt roads and highways and return to the "nobility" of horse drawn wagons and carriages; or that we should do away with ridiculous and corrupt modern governments and return to the glory of kings and literal nobles!

There is no inherent "nobility" in reviving the past just because it was the past, or just because we chose to discard it or otherwise altered events or conditions such that what had existed previously could no longer persists. And even if there were, there's no sane or rational way to choose which of countless different pasts are "worthy" of being revived, and which are not.