In 2000, some amateur archaeologists were exploring a wooded ridge called the Harzhorn in Lower Saxony, searching for a medieval fortress. Instead they found a Roman horseshoe called a hipposandal and some other Roman artifacts. In 2008 they notified the state archaeologists, and an effort was mounted to explore the site. 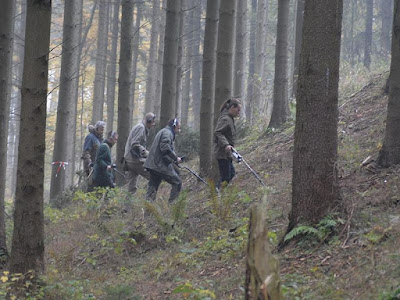 That effort produced an amazing array of artifacts, mostly Roman military gear, along with a few Germanic spearheads and the like.

The most common artifacts were nails from Roman military shoes, 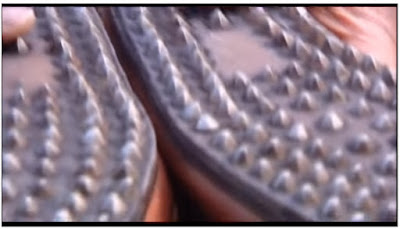 which is not really surprising, given that a single caliga had 80 to 100 nails. 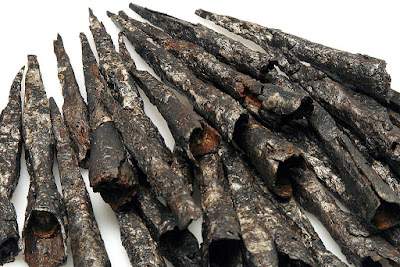 Also very common were the heads of Roman ballista or scorpio bolts; more than 170 of these were found, as compared to about 50 spear and arrow points. 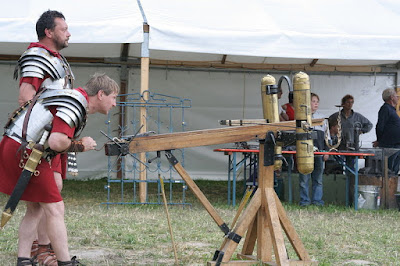 This is an important find because while Roman writers mentioned that ballistas were sometimes used as mobile field artillery, those writers gave no indication of how this was actually done, and there was little archaeological evidence. Some of the bolts at the Harzhorn were found deep in the soil and a few were found wedged into cracks in the limestone bedrock, thus apparently lying right where they struck, showing the direction from which they were fired. We'll come back to this later. (Above, a modern ballista of the mobile type.) 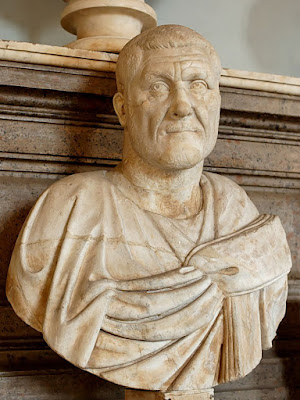 Coins found on the site date the battle to around 235 CE. The emperor would either have been either Severus Alexander, the last of the Severan emperors (208-235), or Maximinus Thrax (235-238, above), the Thracian soldier who overthrew him. Both are recorded as having campaigned in Germany. These campaigns had various purposes: to punish tribes that had raided the empire too often or too destructively, to break up powerful coalitions of potential enemies, and generally to protect the empire by taking the fight outside its borders. 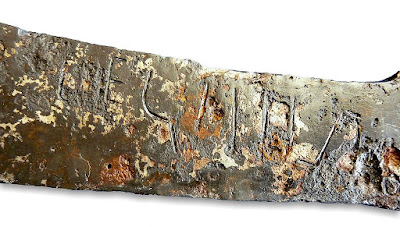 This dolabra or entrenching tool is scratched LEG IIII F, apparently the Fourth Legion Flavia Felix, which was based in Belgrade. So this Roman force had men from at least one legion, not just auxiliaries. 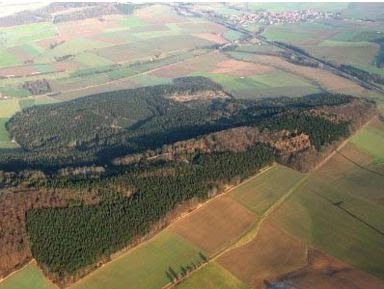 Photographs of the Harzhorn. The Harzhorn is the eastern end of a long ridge. This ridge is within a gap in the mountains that allows passage from southern Germany onto the North German Plain; the little river valley just east of the Harzhorn is the easiest way through this mountain gap. The general idea is that the Romans must have been marching through this gap, perhaps returning from a raid, and the Germans tried to block them by taking a position on this steep-sided ridge. 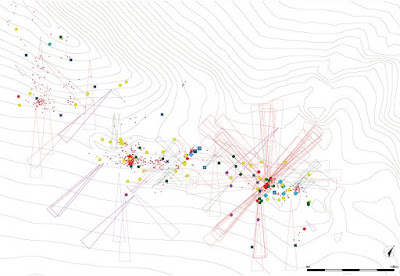 In the way of modern battlefield archaeologists, these Germans have made a precise record of where each object was found. For all missiles they have also recorded which direction it was facing. The maps published so far are not complete or very well annotated, but they give a good idea of what has been found. A professor who is a friend of mine is teaching a course on ancient military history this term, and one of the paper assignments he offered his students was to use this evidence to reconstruct a narrative of the battle. He graciously made all the material he assembled for this assignment available to me. I find this assignment irresistible, so I here offer my own attempt. Above, the general map of finds from 2008. 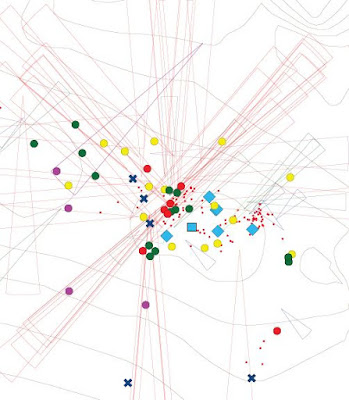 Close up view of the core area. The symbols are as follows:

The large isosceles triangles mark the locations of missiles. The arrowhead or ballista bolt was found at the point, and the rest shows the orientation, that is, the direction from which the bolt might have been fired.


Pink cone: missile from a large torsion engine (certainly Roman).
Purple cone: missile from a lighter torsion engine (certainly Roman).
Green cone: an arrowhead (German or Roman not indicated).
Blue cone: a spearhead (not indicated whether this is Roman or German, but since German spearheads are marked with blue circles—see above—might this be Roman?).

Of course any particular bolt might have been moved by a badger or an uprooted tree, so there is some doubt as to which are in their original positions. The excavators say the one thing they are certain of is that the center of the area above was fired on by Roman ballistas from the north; one assumes that this is the orientation of the bolts they found embedded in the bedrock.

The presence of Roman wagon parts is confusing, since the Romans did not take wagons into combat. It has been speculated that perhaps these Germans had attacked the Roman baggage train and seized part of it, and that perhaps this is how the battle began. But then again perhaps these German had stolen these wagons months or years ago and pressed them into service as shields when they found themselves under ballista fire. 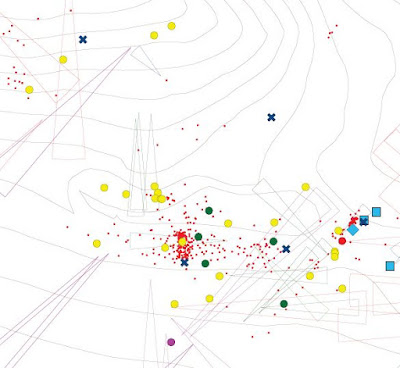 The area just west of the map above. Here there are fewer ballista bolts but many more hobnails, perhaps suggesting hand-to-hand combat.

The obvious inference from these maps is that the battle had at least two phases. In the first, the Romans focused their attack on the eastern end of the German line. They used ballista fire to soften up this position. No doubt the Germans here had formed a shield wall and the Romans could see that storming uphill into that wooden wall was not going to be easy. The advantage of a ballista over an arrow was that ballista bolts could go through wooden shields and kill the men behind them. Perhaps the Germans tried to protect themselves by bringing up some wagons and sheltering behind them. The Romans attacked the German position from the north at least, but quite likely from the south as well. Either with missile fire alone, or by bombardment followed by an infantry advance, the Romans drove the Germans off the low-lying eastern part of the ridge. The Germans fell back up the ridge toward the west. But the Roman infantry kept up close pursuit and, after a short, sharp fight at the spot marked by all those hobnails, the Germans gave way again and continued to retreat up the ridge with the Romans in pursuit. 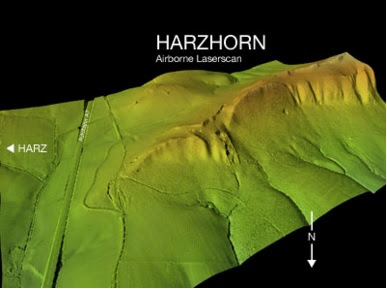 One of the problems with this battlefield is that the place that might well have been the key, the low-lying stream valley east of the ridge, is crossed by two modern roads and is generally messed up, so we have no idea if there was any fighting there. (The valley is to the left in the Lidar map above, which faces south.) In ancient times the area was marshy, but it was certainly passable, since the route through here goes back to Neolithic times. So if the Germans left the low-lying valley undefended, the Romans could easily have sent men through it to attack the end of the ridge from both sides. Or perhaps the Germans defended the low ground with cavalry, which the Romans drove off; or perhaps actually the key part of the battle took place by the stream and what survives is a side show. We simply don't know. 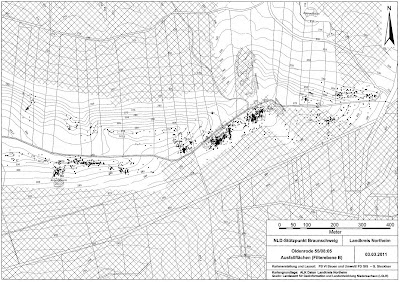 Not only that, but it seems that since the maps I posted above were made, the archaeologists have continued working and they have found more artifacts west of the maps above. The map above was published in 2011, and it seems to show that the fighting extended some distance to the west along the southern slopes of the ridge. (That's a big file; click to enlarge). The excavators have assumed in their publications that the Romans attacked from the north, but I find that hard to reconcile with the western section of the map above. 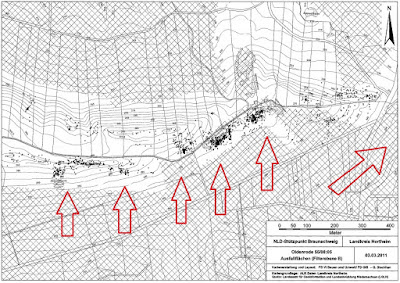 So I reconstruct the battle like this. The Romans are moving along that road from the southwest when the Germans appear on the ridge above them. The Roman commander – after pausing to deliver a suitable speech in which he points out that these barbarians are afraid to fight the Romans man to man on open ground, thus they hide behind trees and rocks in the cowardly way of their people –deploys half of his men facing north. But they do not charge the ridge, just apply enough pressure to keep the Germans in place. Meanwhile the other half of the Roman force, including the cavalry, moves to the east toward the stream valley. 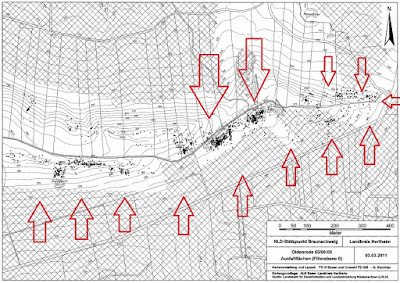 After brushing aside whatever force the Germans have stationed by the stream, the Romans push to the west, into the rear of the German position. They identify a key point at the eastern end of the steep ridge and position most of their artillery to fire there. Perhaps this is where the German king has set up his standard, surrounded by his household men. As the ballistas do their damage, the men of the legion slowly work their way forward. Then the signal is given, and the Romans roar their deep-throated battle cry and sweep up the ridge from both sides. The Germans remind each other of the oaths they have sworn, of the boasts they have made around the fire in the mead hall. They take up their spears and axes and stride forth to meet the invaders. 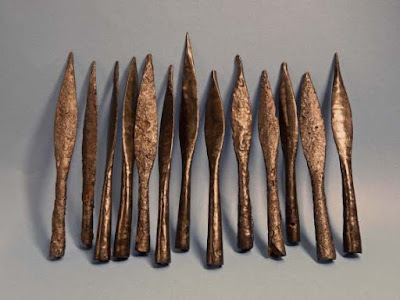 But the Romans outnumber their remaining enemies, and outgun them. The eastern end of the ridge is overrun. Around the upended wagons the king's sworn men make a brave stand, but the Romans are advancing from every side and they are in danger of being cut off. Deciding that this is not the day the gods have chosen for him to die, the king signals a retreat west up the ridge. The Romans shout again and follow, and another sharp fight follows; more men go down, and the ridge is strewn with corpses. To the west the Germans had held their position bravely, but as the Romans seize the high ground behind them they panic and flee, some even casting away their shields. The Romans bury their dead, leave the stripped German bodies for the crows, and march on to continue their mission of destruction.

Wikipedia; the web site (in German) of the excavation; an English summary.
Posted by John at 6:56 AM