Iowa and the Long Slog

I went to bed last night thinking that wins by Hillary and Trump would go a long way toward clarifying the primaries. But instead we got ambiguous results that seem to me to point toward long struggles in both parties. I think Hillary has the edge among Democrats, but among Republicans I think Trump, Cruz and Rubio all have good shots. 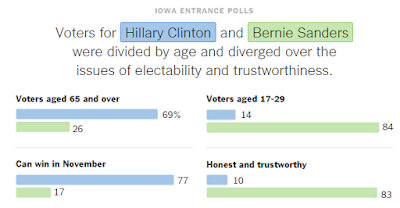 This is interesting, from the Times front page. Sanders really romped among young voters. Sadly for them, Hillary won among old folks and those with higher incomes. It's another interesting picture of how our politics might be different if young and poor people voted as reliably as the old and rich do.
Posted by John at 6:56 AM

And five delegates were chosen by five flips of a coin. Hillary won all five.

That would have gotten her Napoleon's vote. The first thing he always asked about potential generals was, "Is he lucky?"

I read that there were 7 coin flips and Sanders won 6 of them.

"The Iowa Democratic Party does not have comprehensive records on how many coin flips/games of chance were held Monday evening. However, they do have partial records.

"More than half of the 1,681 Democratic caucuses held Monday night used a new Microsoft reporting app. Of those, there were exactly seven county delegates determined by coin flip. The remaining precincts did not use the Microsoft app, and instead used traditional phone-line reporting to transmit results. In these precincts, there no are records of how many coin flips occurred. There's only anecdotal information on these precincts.

"Who won these coin flips?