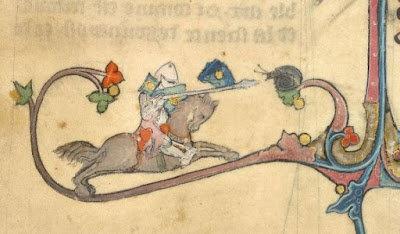 For reasons nobody can now fathom, the margins of fourteenth-century illuminated manuscripts are full of knights battling snails. This one is from a manuscript of Brunetto Latini’s Li Livres dou Tresor,  c. 1315-1325, now in the British Museum. 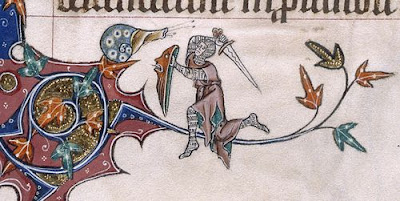 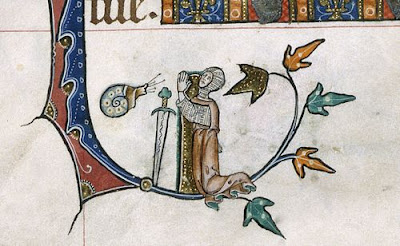 Medievalists have been wondering what this is about since at least 1850, when


the magnificently named bibliophile the Comte de Bastard theorised that a particular marginal image of a snail was intended to represent the Resurrection, since he discovered it in two manuscripts close to miniatures of the Raising of Lazarus

Alas, he failed to convince anyone else. (Two from the Gorleston Psalter, made in Suffolk, England c. 1310-1320. 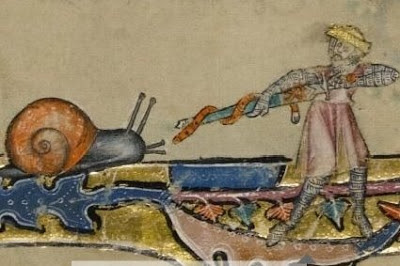 In 1962 Lilian Randall published a detailed analysis titled ‘The Snail in Gothic Marginal Warfare’ (Speculum 37, no. 6, pp. 358-367). She considered the theory that the snails represented heretics, but rejected it partly because some of the knights are clearly losing. In the end she decided that snails just represented jovial monks' notions of heavily armored knights. (From the Macclesfield Psalter, made in East Anglia, c. 1330.)

Most of the examples I have found have been English, but this one is the Smithfield Decretals, said to have been made in southern France, most likely Toulouse, between 1300 and 1340. 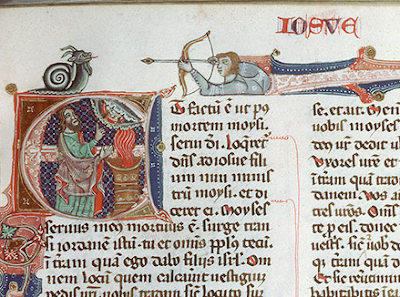 And this is from a Bible made in Spain around 1320, now in Toulouse. I found this on Hunting for Snails, a blog devoted to snails in art. Really. 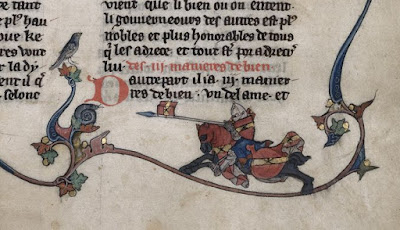 And one more, from a manuscript made in Picardy, France.

That's enough amusement for now. Go do something serious and important.
Posted by John at 9:21 PM

Speculating perhaps wildly here, but could it be that this was drawn from an English mockery of the snail-eating French?

They would not only be making a physical insult (implying them to be slow, slimy, stupid, et cetera), but also deriding their cultural difference in terms of choice of cuisine (with the implication that eating snails is uncouth and a sign of French inferiority).

The few examples which originate from French sources come from regions which at that time would have been greatly influenced by the politics and culture of the English, and which would concievable reason to resent or oppose the French crown and knights.

And the one example which originates from "Spain" isn't precisely sourced, and doesn't tell us whether it was from territory held by the Crown of Castile, or if perhaps it was Aragonian, or Navarrese, et cetera, or anything else which might tell us was likely to author and what their opinions of and relations with the French and the English might have been.

Just and idle thought, not well explored, and quite possibly doesn't hold any water, but still...