More from the Boneyard of Alken Enge 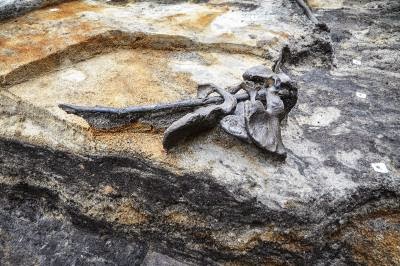 Danish archaeologists are back digging at Alken Enge, a bog full of Iron Age skeletons. As I wrote two years ago, the skeletons seem to be the remains of a small army from about the year 1 that were defeated in battle and then offered to the gods. The first interpretation was that the victims might have been captured alive and then dispatched with axes by the side of the bog. Now, though, this has changed:


"We have found a wooden stick bearing the pelvic bones of four different men. In addition, we have unearthed bundles of bones, bones bearing marks of cutting and scraping, and crushed skulls. Our studies reveal that a violent sequel took place after the fallen warriors had lain on the battlefield for around six months," relates Project Manager Mads Kähler Holst from Aarhus University.

Imagine the procession of people carrying bones from the battlefield to the bog: skulls on poles, pelvic bones strung on sticks, other bones in bundles, drums beating, horns blowing, priestesses shrieking or chanting, children crying, teenage boys trying to act like brave warriors, raucous crows circling overhead, everywhere the stink of rotting flesh. At the sacred lake the bones are dumped out on the shore and then attacked as if they were living enemies: hacked with axes and swords, smashed with hammers, stomped on, spat on. Was it the men who did this, or was it the whole community, old people and children taking this chance to inflict blows on their enemies? Were those who lost relatives offered the chance for revenge on the mute bones?
Posted by John at 1:44 PM

Raucous crows, revenge on the mute bones . . . I can just see it. Nicely done!