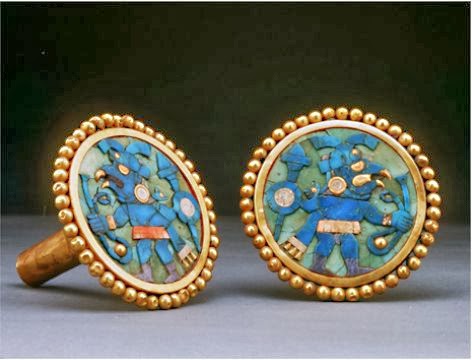 Over the past 50 years the world has become aware of another great artistic tradition. The Moche culture of coastal Peru had been almost completely forgotten until archaeologists and tomb robbers began unearthing its treasures in the twentieth century. Over the past few decades a series of amazing discoveries has added enormously both to our knowledge of the Moche culture and their prominence in the world scene. 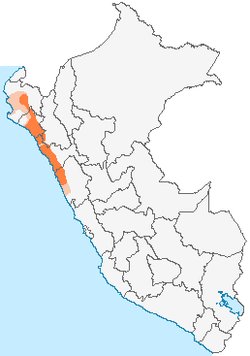 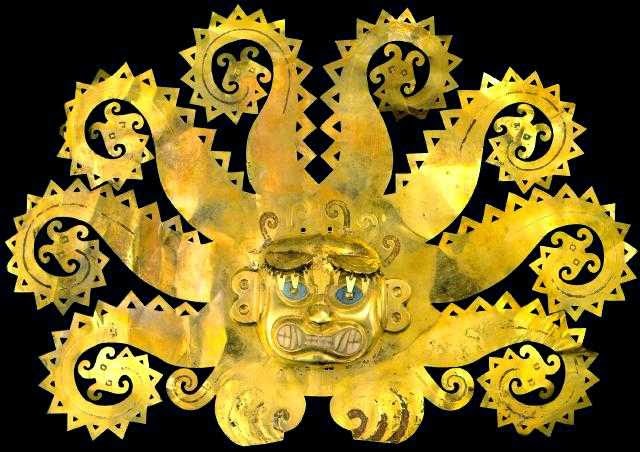 The Moche homeland is a desert, and their culture was based on irrigated agriculture in the valleys of rivers than run from the Andes down to the Pacific Ocean, plus fishing in the rich coastal waters. They prospered between about 100 and 800 CE and their civilization reached its peak in the Middle Moche period of 300 to 600. The golden headdress above was looted from an unknown tomb, probably in the 1980s, and discovered in London by Scotland Yard in 1996. Like this work, much Moche art has ocean themes. 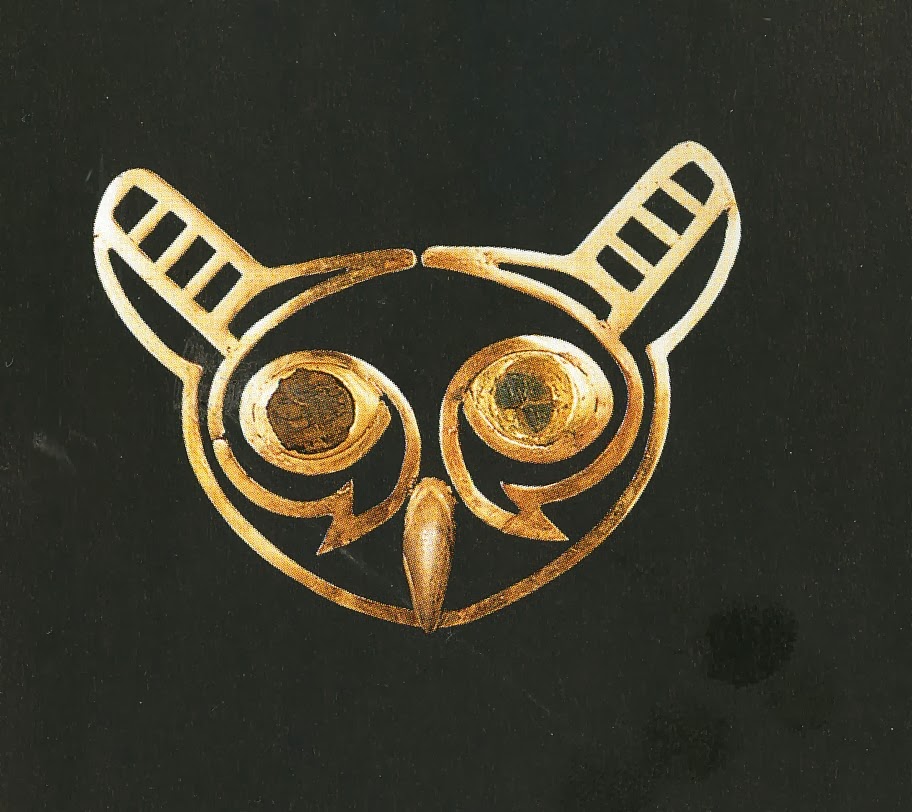 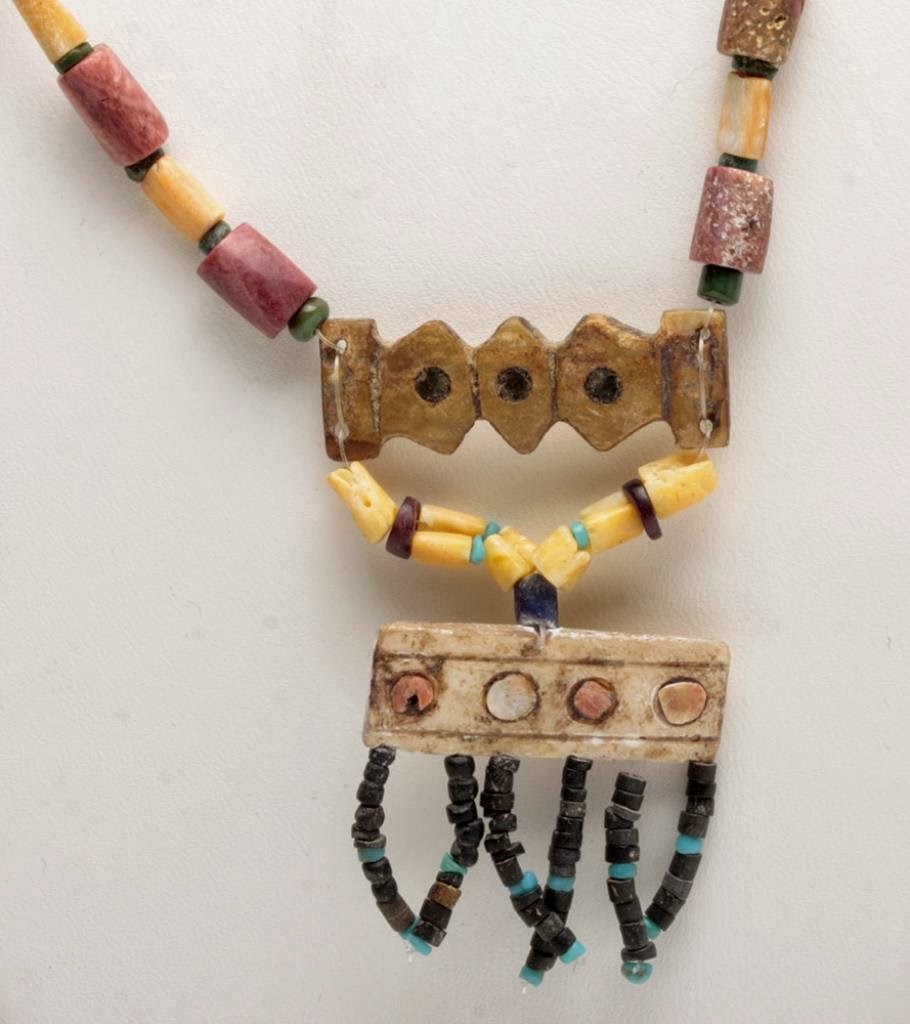 They do not seem to have been a unified empire, but a series of independent states, perhaps one in each valley. They built monumental buildings, especially the large temples now called "huacas," buried their leaders in elaborate tombs, and put a great deal of effort into art. They had style. Their work is unmistakable, from the grandest objects in royal tombs to minor items of jewelry like the necklace above. Their main buildings seem arranged as stages for elaborate rituals and processions, carried out by fantastically costumed royal priests. 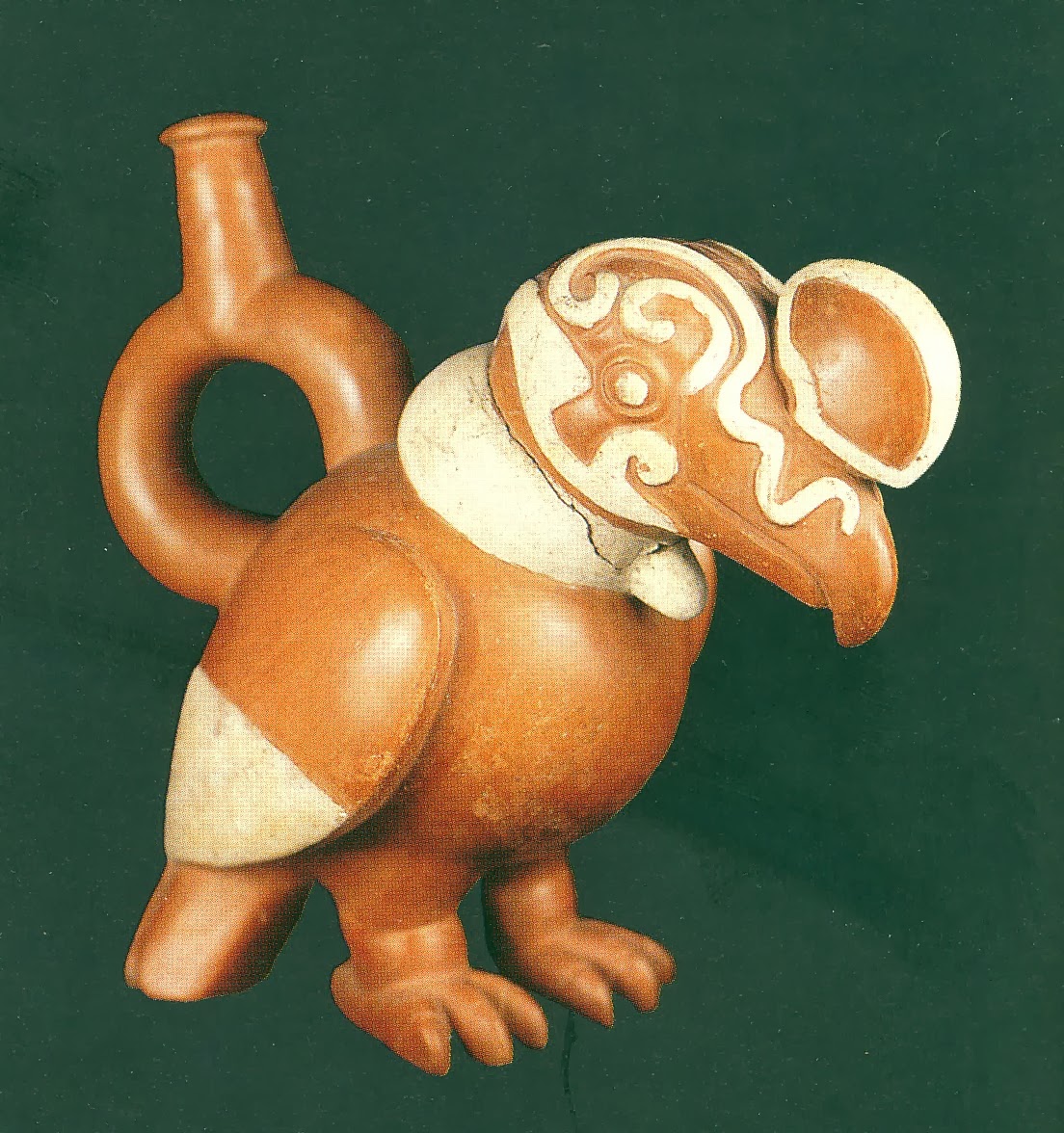 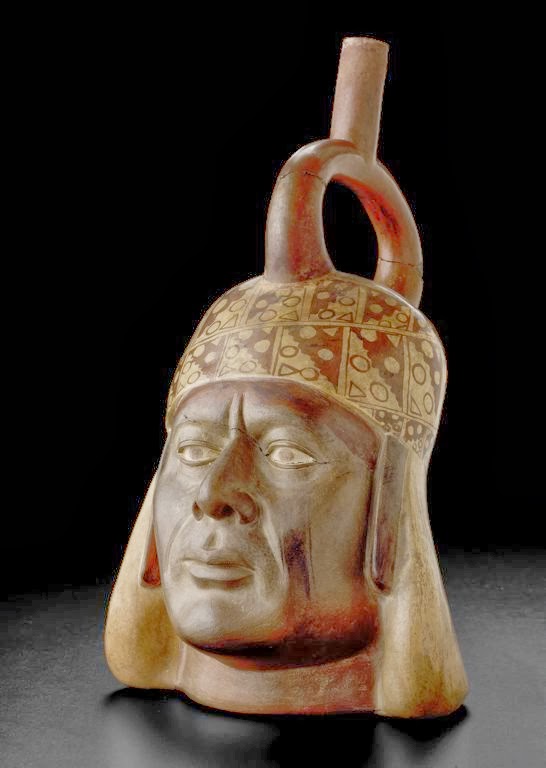 While much of what is shown here comes from royal tombs and was limited to an elite circle, their effigy pottery is more common and must have been more widespread; it has turned up in large amounts during recent excavations of residential quarters in Moche towns. Vessels like the ones above were made in molds, sometimes by the hundreds. 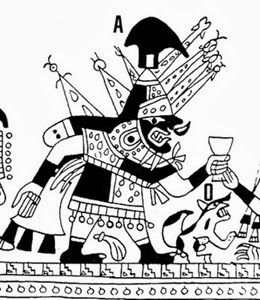 Other Moche vessels were painted with detailed scenes of rituals, battles, and other scenes. The pottery is the source for much of what we know about how they looked and lived. (Above, "presentation scene" and captives being presented to a ruler.) Because so many of the Moche artifacts in the world's museums were looted, we do not know where, exactly, they came from, or what period of Moche culture they represent. Moche culture has therefore been studied mainly as a single unit, and only recently have scholars been able to write about regional variations and change over time. 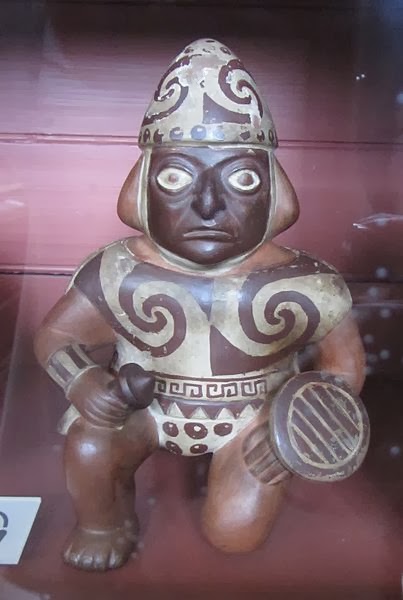 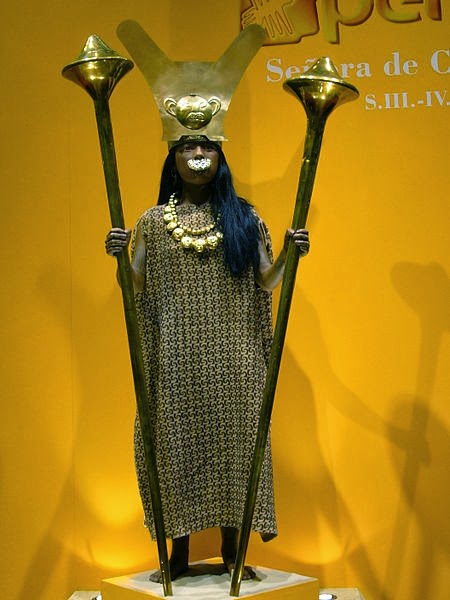 We have no textual sources on the Moche, so reconstruction of their culture depends on archaeology and iconography. They were certainly dominated by a wealthy elite, among whom both men and women were prominent. Warfare was important, especially toward the end of Moche civilization, but the leaders were depicted more often as as priests and priestesses than as warriors. Like the famous Lady of Cao above and the even more spectacular Lord of Sipan. 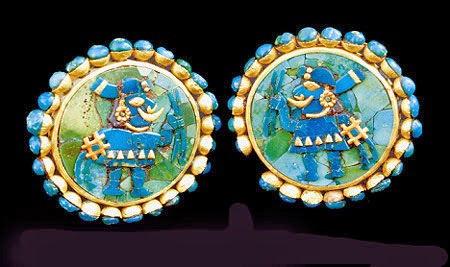 Moche iconography is full of mysterious figures like the "mancrab" above, as well as others known as The Woman, The Iguana, The Decapitator, The Scorpion, and so on. 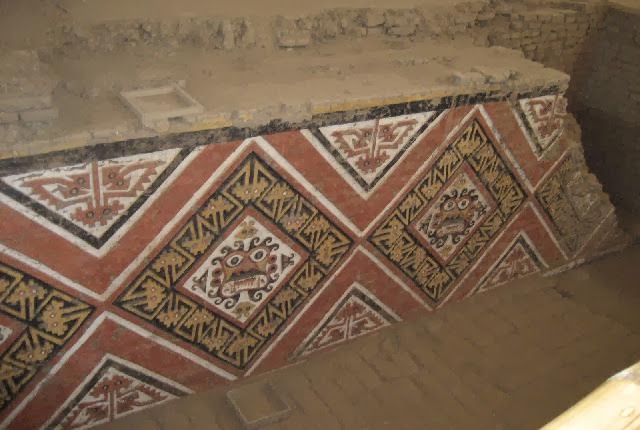 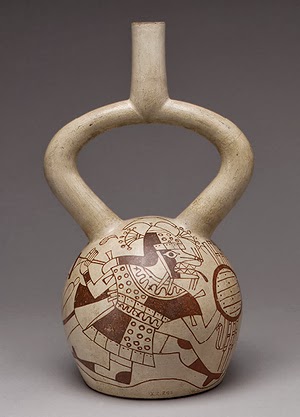 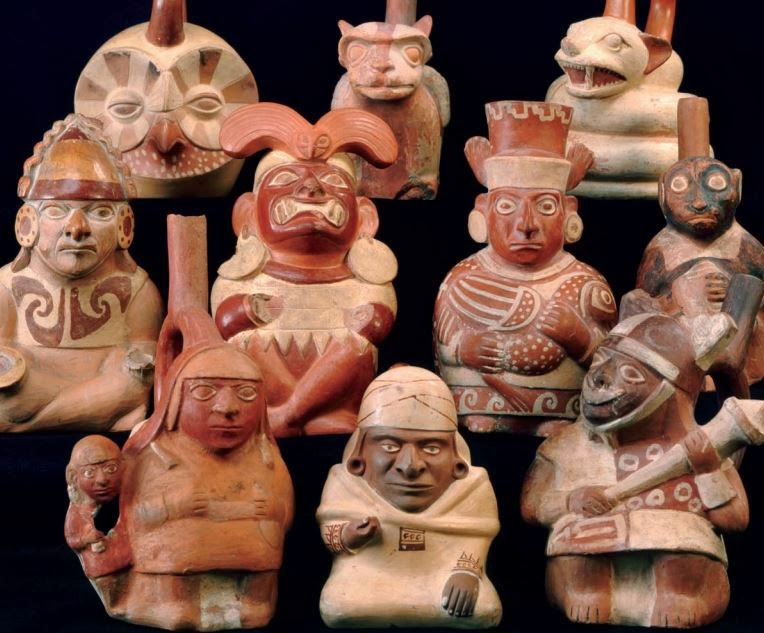 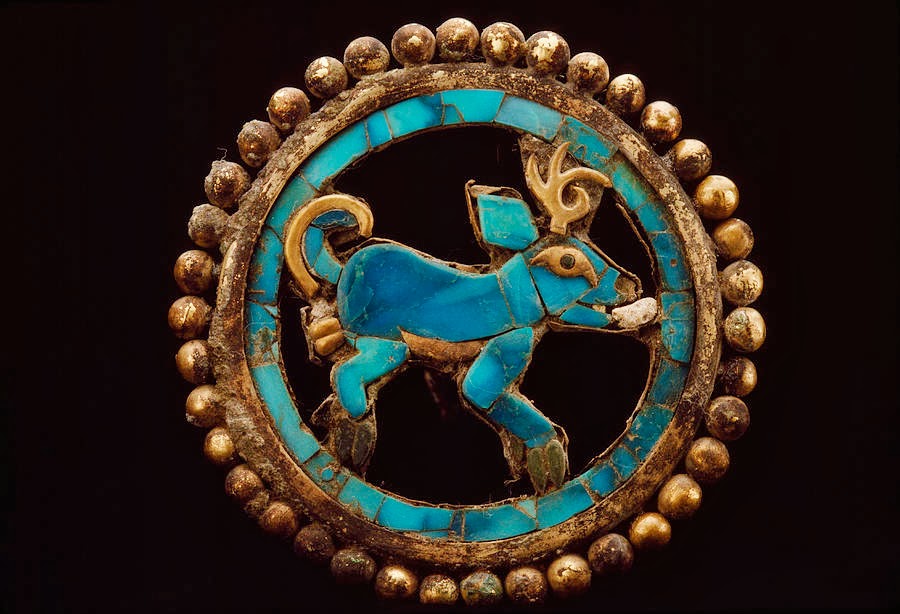 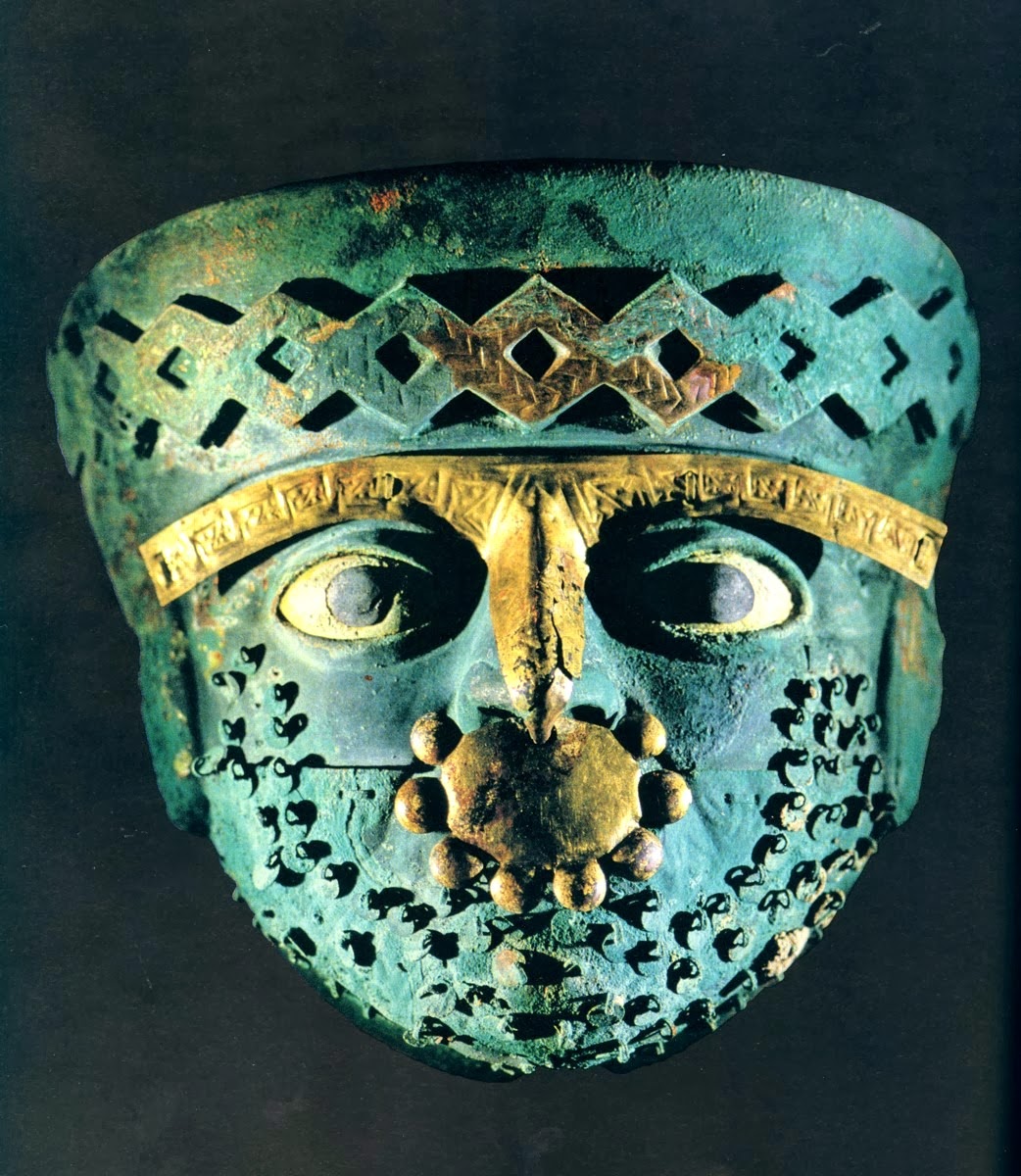 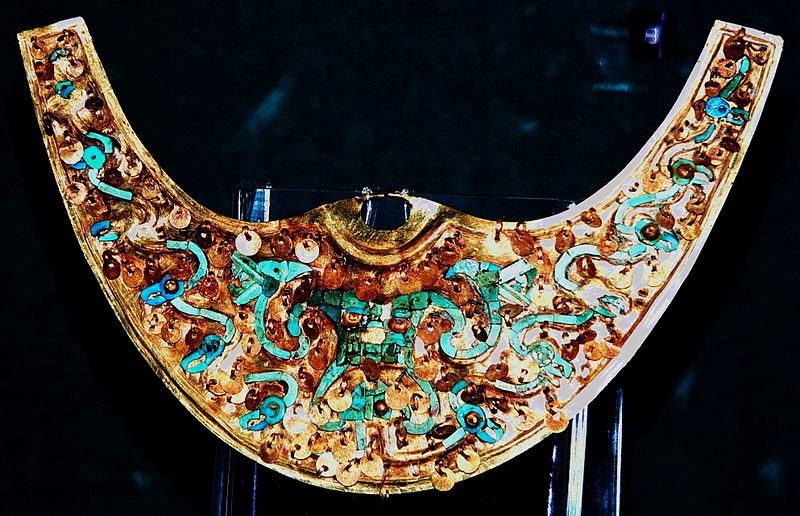 Attempts have been made to unravel some of the stories that seem to be depicted and related them to legends recorded in Peru in modern times, or among the Maya. Some of these attempts strike me as plausible, but far from convincing. But to appreciate the art it is not necessary to work through these interpretations, only to appreciate that they made something profound to the people who made them. 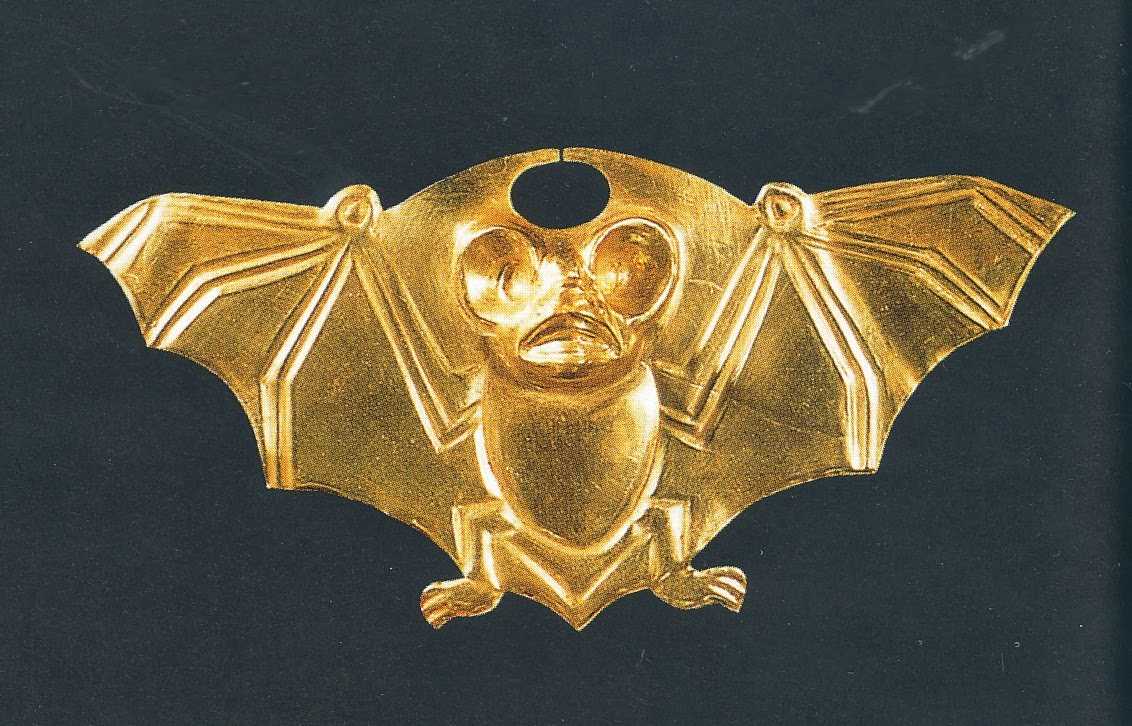