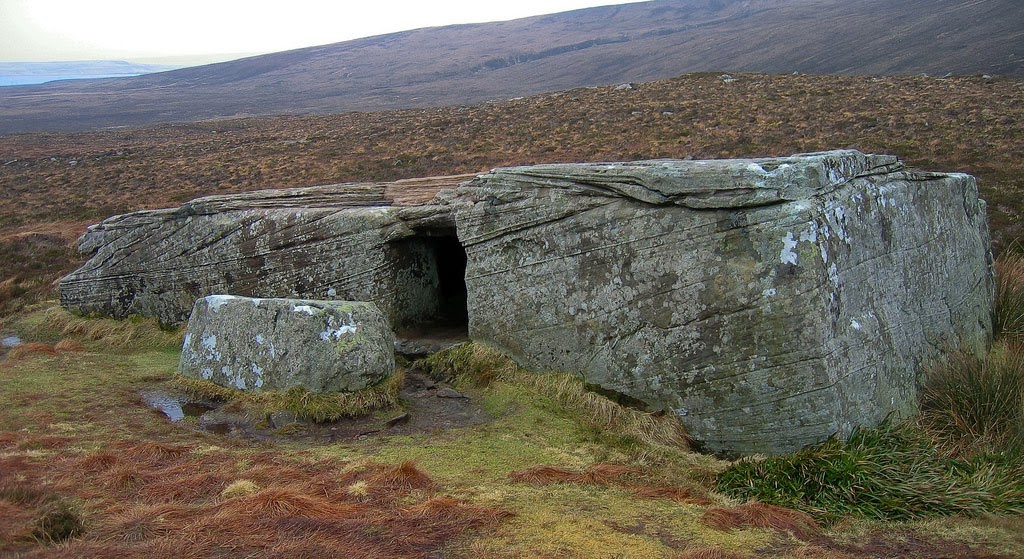 The Dwarfie Stane is a neolithic tomb on Hoy, one of the Orkney Islands off Scotland. It is unique in Britain in being entirely cut into the stone, rather than built. It resembles rock-cut tombs of the Mediterranean rather than the chambered tombs of its own part of Europe. That big stone in front once blocked the door. It was plundered long ago, before the 16th century. The name derives from the Norse, since dvergarsteinn or "dwarf stones" are common in Norway. 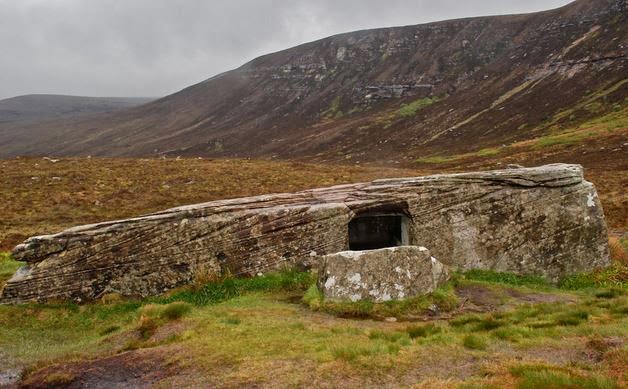 Local folklore recorded by Walter Scott held that the tomb was the home of a "dwarf named Trollid," which is an amusing conflation of British and Norse traditions. Some Viking thought dwarves or trolls lived in the tomb, but when he tried to explain this to an English-speaker it came out as "a dwarf named Trolls." 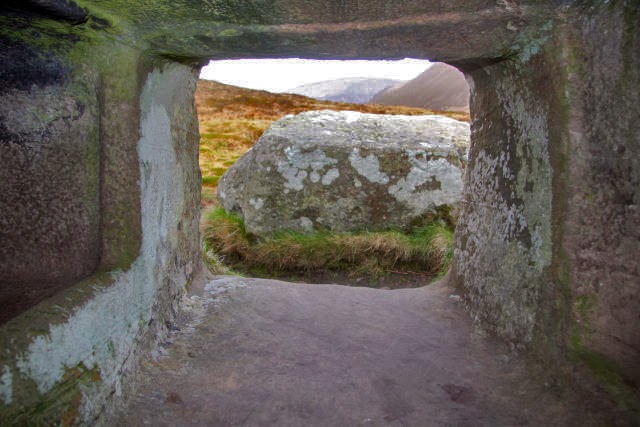 One the other hand, other local tale-tellers insist that the tomb was the home of giants. Small giants, presumably, since the tomb is only 6 feet tall. 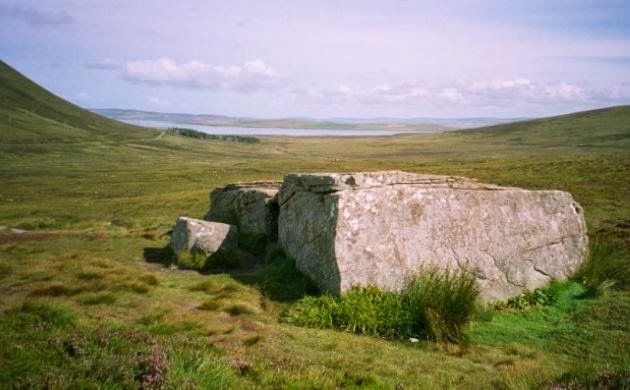 It is in a remote area, not close to any known neolithic settlement:


The area round about the Stane is very bleak and rugged, the soil being boggy, and always wet, even in the dryest weather, providing no shelter of any kind.

I suppose it was the shape of the original boulder, so house-like, that originally inspired someone to imagine a tomb on the spot. 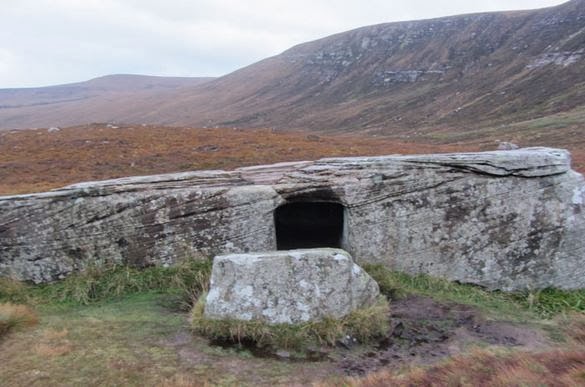 There is a legend about a magic gem in the hills above the Dwarfie Stane:


Above the Dwarfie Stane, on the face of Ward Hill, it was once said that there was a "wonderful carbuncle":

In the months of May, June and July, about midday the rays of the sun caught something that shines and sparkles admirably and which is often seen a great way off. It hath shone more brightly than it does now; though many have climbed up the hill and attempted to search for it, yet they could find nothing.

The existence of this magical gem has been explained as being a mere trick of the light - perhaps the sunlight reflecting from some water cascading down the face of a smooth rock on the hillside. Nevertheless, a tale grew around the myth of the enchanted carbuncle - a tale that incorporated elements of the Orkneyinga Saga and a malicious dwarf known as Snorro. 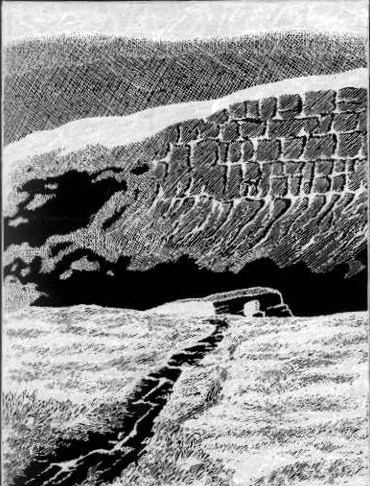 Who could resist? I had to look up the Tale of Snorro the Dwarf. This first appeared in a nineteenth-century collection of children's stories, and it bears the signs of romantic retelling. But the feud between two brothers at its heart comes straight from the Orkneyinga Saga, a medieval chronicle of the Viking Jarls of Orkney, and Sigurd Towrie, the very learned proprietor of Orkneyjar, thinks it is rooted in oral tradition. It says this about Snorro:


He would not attend to the country people who came to seek his help, unless they bowed themselves humbly before him and spoke to him as if he were a King. I say that the country people sought his help, for he spent his time, or appeared to spend it, in collecting herbs and simples on the hillsides, which he carried home with him to his dark abode, and distilled medicines and potions from them, which he sold to his neighbours at wondrous high prices. Snorro was also the possessor of a wonderful leathern-covered book, clasped with clasps of brass, over which he would pore for hours together, and out of which he would tell the simple islanders their fortunes, if they would. For they feared the book almost as much as they feared Snorro himself, for it was whispered that it had once belonged to Odin, and they crossed themselves for protection as they named the mighty Enchanter. 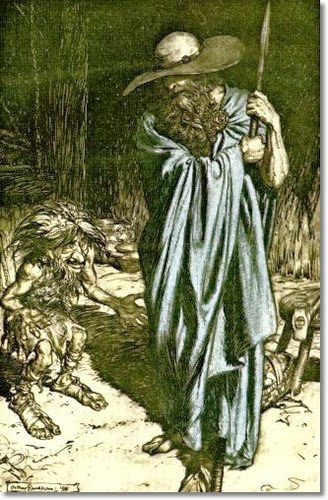 Of course while he wandered the hills Snorro was really searching for the great gem:


And at night, when everyone else was asleep, he would creep out, with pickaxe and spade, to turn over the rocks or dig over the turf, in the hope of finding the long-sought-for treasure underneath them. He was always accompanied on these occasions by an enormous grey-headed Raven, who lived in the Stone along with him, and who was his bosom friend and companion. The islanders feared this bird of ill omen as much, perhaps, as they feared its Master; for, although they went to consult Snorro in all their difficulties and perplexities, and bought medicines and love potions from him, they always looked upon him with a certain dread, feeling that there was something weird and uncanny about him.

It was a source of love potions and other spells that Snorro featured in lives of great Vikings, but I will leave Sigurd Towrie to tell that tale.
Posted by John at 8:04 AM