Why No Empires after Rome? 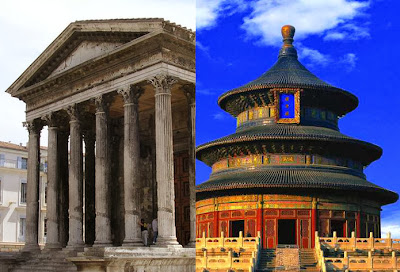 To me the most interesting thing about the fall of Rome is not that it fell. Hey, cities get sacked, and empires fall. Nothing lasts forever. The strange thing about the Roman empire is that it never came back.

After the Han Empire in China fell, there was a period of violent anarchy and economic decline, but then a new empire was formed very much like the one before, occupying about the same area. When it fell, there was another and another and another and another, right down to the twentieth century. Across that whole 2,000 years the Chinese state maintained many of the same traditions and the same habits of life. There was great continuity between the various Chinese empires because they were all dominated by the same class of people, the educated nobles we call mandarins. The emperors came and went, some of them Chinese and some of them Mongols or other barbarians. But whoever sat on the throne, the running of the empire -- the collecting of taxes, the administration of justice, the keeping of records, the building of canals and temples -- was done by Chinese mandarins. So was the writing of poems, the painting of pictures, the planting of gardens, and all the other acts that created and sustained Chinese elite culture.

The Roman empire was also dominated by a class of people. The aristocrats of the Roman world had much in common across the whole span of the empire. While many people spoke their local languages and worshiped their local gods (or later saints), the elite spoke Greek or Latin and and honored the gods of the state. They were educated in much the same way, with great emphasis on rhetoric and on the study of literature written centuries before. They patronized art made in a common style, mainly using motifs as old as their books. They lived in villas built in much the same way from Egypt to England, decorated with interchangeable mosaics. They were cosmopolitan, moving easily between provinces to take up new jobs or pursue new opportunities. They were very devoted to the state, and saw achieving high office -- governor, senator, consul -- as the noblest ambition.

Rome did not rise again because the class of people who dominated it simply disappeared from western Europe. By 600 CE, there were no more people of this sort on the continent. The European elite of the seventh through eleventh centuries was composed of people very much unlike the Roman elite. Mainly they were warriors, people who mostly could not read or do multiplication and cared not a whit about either Latin learning or service to some distant state. They cared mainly about their own kin, possibly a little about their own districts and their immediate overlords. There were people in that time who were educated and wrote good Latin, but most of them were monks, and their habits of thought were radically different from those of Roman senators. Since the class of people who would maintain an empire and serve it faithfully no longer existed in Europe, no stable empire could arise.

The replacement of the Roman elite with by the nobles, knights and monks of medieval Europe was one of the most dramatic and important changes in the continent's history.
Posted by John at 7:40 AM

I too have long thought this was a very striking contrast, and a fascinating and important problem. Part of the answer would seem to me to lie with a peculiar resilience that Confucianism has. I'm puzzled as to what that resilience is about, but it seems to be there. Introductions to Confucianism, which is as far as I've been able to get, to me have difficulty conveying the real vitality or attraction it must have had to have had so much staying power.

One aspect I've noticed lately--I'm teaching world history now--is that Confucianism does seem aimed in part at counteracting a fissiparous kin-based morality that was also present in China, but which has left very few written records, at least none that make it into the introductory materials that are all I've had time to read.