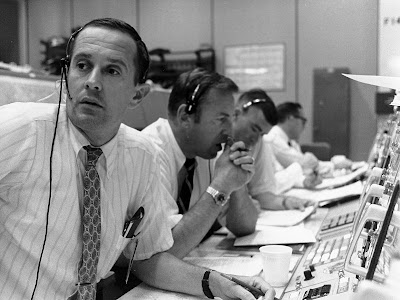 More than 400,000 people worked on the Apollo program. At the time the most famous were the astronauts and the mission commanders, but looking back we focus more and more on the engineers. The men in white shirts, dark ties, and glasses are the ones who made the whole thing happen. I noticed that when the Los Angeles Times ran a celebratory article on the mission, their focus was on the engineers who built the Saturn V's enormous engines. Theirs was a real technological triumph. The massive J-1 engines on the Saturn V's first stage were ten times as big as any rocket engines ever built before. They had to be redesigned 15 times in two years by teams of young engineers working 16-hour days, but the end product worked every time. As we now know, what stopped the Soviet moon program was repeated failures in the engines of their giant N-1 rocket, which blew up every time it was tested.

Apollo depended on hundreds of such teams working separately to create its many completely unprecedented systems. Nobody had ever built a craft that could land on another world and then blast back into orbit, a ship that could keep men alive for weeks in space, or a space suit that could be worn while walking on the moon. The men who did these things loved what they did. They reveled in their importance, and they poured their hearts and minds into their work. I remember a story from the memoirs of one of the Apollo astronauts. The night before launch he was walking around the launch complex when he was challenged by a technician who was working late, checking and rechecking every component of the launch computers. When the astronaut had explained who he was, the technician said, "if anything goes wrong tomorrow, it won't be because of my system." The astronaut realized, he said, that flying to the moon was only possible because hundreds of men had the same dedication to engineering perfection. If the mission failed, it wouldn't be because of them.

Until World War I, scientists were almost universally portrayed in America and Europe as ridiculous eggheads doing pointless things. But the technological progress of the twentieth century brought scientists and engineers to the forefront of competition between nations. When World War II came, all the combatants marshaled their scientists into teams more important than any combat division, and the scientists went to work designing stronger armor, more powerful guns, deeper-diving submarines, faster airplanes, sonar, radar, and eventually the atomic bomb. Those fearful mushroom clouds sealed the ascent of scientists to the pinnacle of military power.

When Kennedy sought a non-military way to challenge the Soviets, he turned again to science, announcing his bold plan to put a man on the moon and bring him safely back to earth. Once again the power and prestige of the nation was placed in the hands of the men with slide rules and pocket protectors. I have always been struck by the assertive nerdiness of those men. They made the clothes that looked ridiculous to hippies and hepcats into proud uniforms of intellectual power. You may think we are losers, their attitude said, but we can blow up the world or send a man to the moon, and you can't. Although what they did was in some ways extraordinarily bold, they went about their work with caution and precision. Every drawing was checked and checked again and reviewed by committee after committee. Every part was tested, tested, and tested again. The missions went step by step, each one a little farther into space, a little closer to the moon. 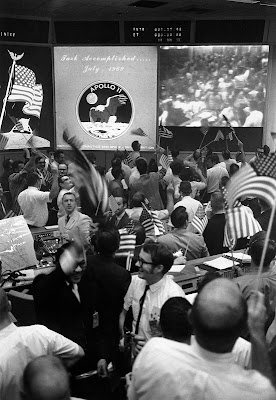 In this picture, the engineers at Mission Control celebrate the successful splashdown of the Apollo 11 crew, July 24, 1969. I celebrate them and their achievement. Apollo 11 was as much as anything the epitome of brainpower, and they supplied the brains.
Posted by John at 9:32 PM

John, on a related note-one of the things I've always loved about watching the movie "Apollo 13" is the parade of scientists in suits. Once upon a time my workplace must have looked like that too. (My past and current employers are over 100 years old).

I've always felt that people treat you the way you dress. That's why I wear a jacket and high heeled shoes to my technical job.

I have an acquaintance, a very high level computer programmer, who dresses in traditional nerd garb: white shirts, dark dies, heavy glasses. I asked him why, and he said, "I want the suits to know who the smart one is."