We're bidding on a job at the Wilderness Battlefield, and it will be a big help for us to know what the sites look like, and since I had never been to this battlefield I thought it would be a good idea to drive down and have a look. It's about 11o miles from my house, Interstate almost the whole way, so I thought I could get there and back in about four hours. Silly me. For reasons I don't understand traffic on I-95 crawled all the way from Washington to Fredericksburg -- this is Saturday! -- and as soon as I got off the Interstate I got stuck in a local traffic jam surrounding the string of strip malls that lines Route 3. At this point I was in the middle of a terrific thunderstorm that kept up furiously all the way to the battlefield. Not wanting to get soaked, I went first to stop in at the Visitors' Center for a chat with the rangers. After the rain abated a bit I went driving around the battlefield. The Battle of the Wilderness was fought in dense thickets of saplings spread across a generally flat landscape, and the soldiers all complained that it was impossible to really see what they were doing or get any sense of what was happening around them.

And so it still is. This is what the Wilderness Battlefield looks like: 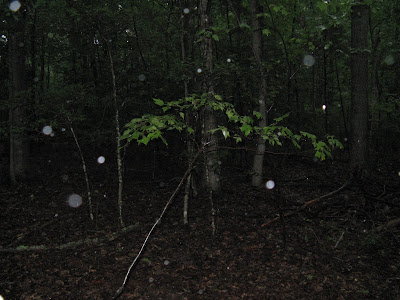 I took more pictures, but except for the ones of monuments they all look exactly like this. There is no point from which you can see anything or get any sense of how the battle unfolded. It's just mile after mile of woods. This makes for an unsatisfying experience as a visitor, but on the other hand I suppose it gives one a faint sense of what the place was like for the men who fought there. Just like them, I was wandering in a confusing woodland where all directions looked the same, not knowing who would have been going in which direction or why.

And then home through even worse traffic, not getting back until eight hours after I left. At least I had a good book to listen to along the way.
Posted by John at 8:18 PM