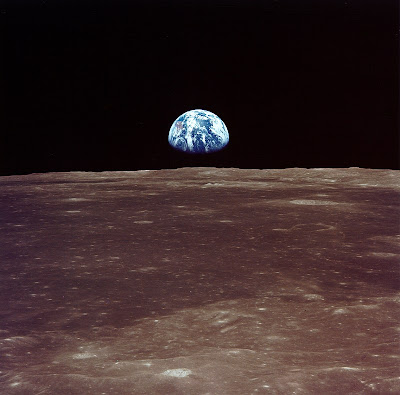 Forty years ago today, at 1:32 PM, the Saturn V rocket carrying the Apollo 11 mission blasted off from Cape Canaveral. Apollo 11 is, to me, one of the greatest and most amazing triumphs of humanity. In the course of the mission our species, earthbound for its first hundred thousand years, walked on another world. Through us, the life of earth took a first tentative step beyond its nursery. We stretched the bounds that hold us to our planet and crossed a quarter million miles of empty space to reach the moon. The enormous brains that we so often employ finding new ways to kill each other were put to a more worthy use, and we found that when we make a great enough effort we can do incredible things.

I was seven years old in July of 1969. I remember men on the moon, but my memories are jumbled, and I am no longer sure which memories go with which mission. I don't think it matters. I remember the voices from space, speaking their strange NASA jargon. I remember flickering pictures on our little black and white television. I remember the extraordinary excitement of the time. I remember what happened, and what it meant to watch the world change.

About 6% of Americans tell pollsters that they believe the moon landing was faked. What a sad trap they have fallen into. They have become too cynical to recognize a true victory of the human spirit, too blinded by suspicion to recognize a really great achievement. They probably think they are very clever not to be taken in by the lies that fool others, but it is they who have been taken in. It is a lie that there is no nobility in the world. It is a lie that governments do nothing but cheat, steal, and bamboozle. It is a lie that humans cannot achieve great things. And it is a mistake to always look for fraud, deceit, and propaganda, because while fraud, deceit and propaganda are real, so is wonder.

I know the Apollo program was a spin-off from the Cold War, a child of the strange rivalry between the US and the USSR for leadership of the world. So what? Nobody ever acts from perfectly pure motives. The Cold War could easily have become a global catastrophe, or even the end of our species, but instead it spurred both Americans and Russians to achieve the extraordinary. The Cold War rivalry provided an opportunity to do something that we ought to have done anyway. And when what should be done is done, it is foolish to worry too much about why it was done. Instead, we should celebrate the doing. Today, and for the next seven days, I celebrate the journey to the moon.
Posted by John at 8:32 AM